Life as we live it 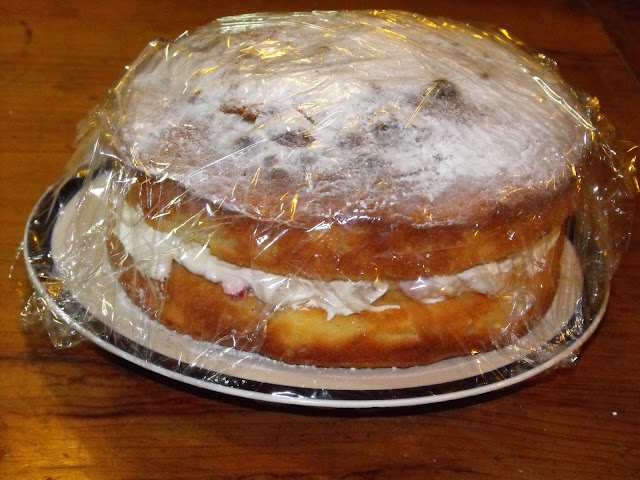 Danny had some friends round last night.  He made a meal for them - a huge Chilli with extras - a good splash of Kentucky bourbon and some stout to give it depth and take away some of the tomato-iness of it.  10/10 from me!  He asked for a Victoria Sponge, so I made this one, which is full of double cream and chopped up strawberries.  It has been a busy week, one way and another, but it's nice to have someone to bake for again.  I've made Chocolate Blackberry Brownies to hand round to fellow stallholders tomorrow, and a Mincemeat Cake for a friend who appreciates some home baking after his wife left him. 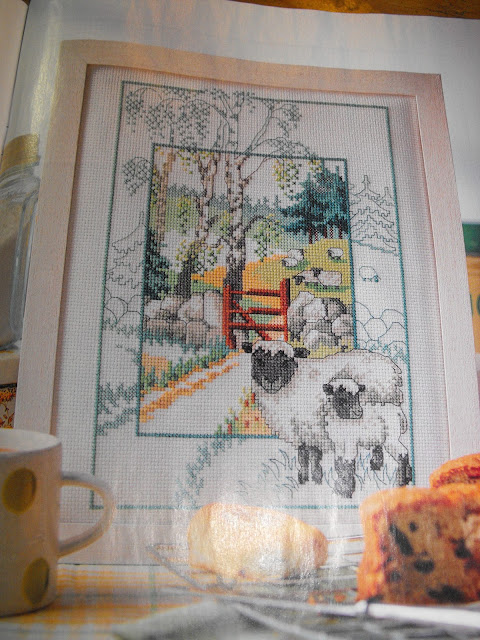 I have made a start on the new x-stitch project.  The area I've done so far is the tree and few sheep to the right of the gate and just above the wall.  I shall outline the sheep tonight, and try and do my outlining as I go along as there's a fair bit of it. 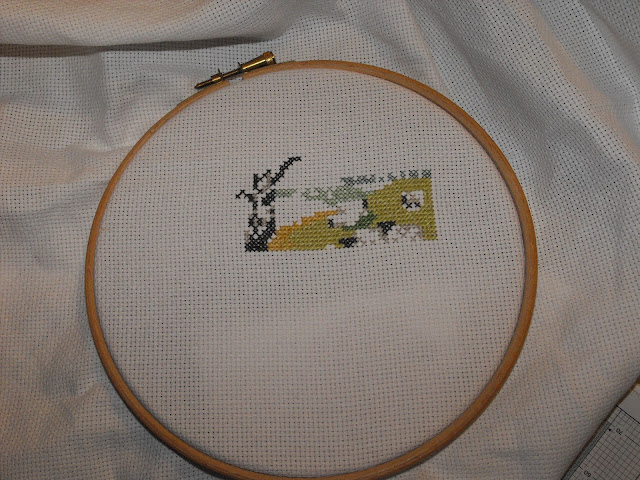 Tomorrow Danny is holding the fort here whilst we go off to man our stall at the Fleamarket in Carmarthen.  It is a long day so I doubt we will be late to bed tonight.  The car is packed within an inch of its life - we always pack carefully and when we unload the other end, it always have enough to spread onto two stalls, so we will have to "pile it high" as they say.  After buying two spare Dyson vacuums at auction recently, when my Dyson stopped sucking up and despite open heart surgery, we couldn't find why, my husband had another disembowelment of it and found a chunk of fluff where I swear there was none before!  Anyway, as that is now working again, we have kept a spare and I ordered fresh filters for one of the replacements as one was missing, and it is working perfectly so we will sell it on now.

Does anyone follow The Archers?  I have been a fan and follower since 1973, when I got fed up with just hearing the top 20 played over and over on Radio 1 and tuned into Radio 4 instead.  There is a very compelling story line at the moment (and for the last few months) involving Rob Titchener's manipulation and bullying of his wife Helen (nee Archer).  Is he a psychopath (sorry, sociopath they are now I think?)  He has many of the attributes . . . I think Rob is on every Archer fan's hit list and it can be chilling listening especially if the listener has any experience of that sort of behaviour in a partner (which I did in the distant past).  I am back to listening every day in the week now, as I'm out on a Sunday so can't listen to the Omnibus as is my wont during the winter months when we are normally at home.  Any episode I miss just HAS to be listened to on catch-up!

I am glad I have managed to string a few words together for a longer post today.  As the whole world can potentially read this blog, I try to avoid emotions, politics, problems, worries and "personal stuff".  That doesn't mean it isn't happening sometimes.  Gosh, I could write some good scripts for The Archers just from personal experiences.  I don't think I'll volunteer though!