Having to hide inside today, and garden round up 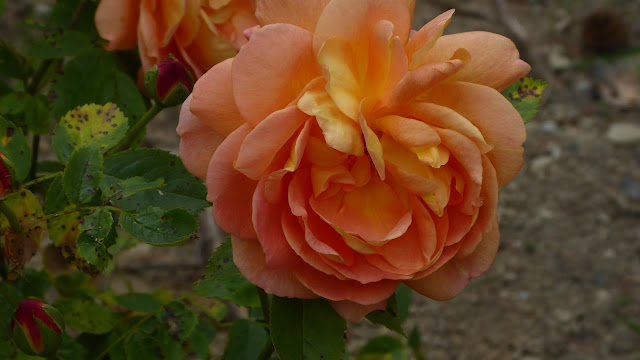 A photo taken yesterday.  The Lady of Shallot loves being up on the sunny bank, and out of the big planter she was in. 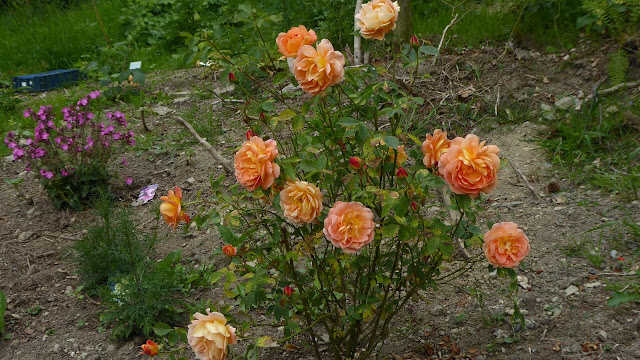 As you can see, this area (where the big hedge was) is still a work in progress.  More plantings needed up there and lots of mulching.  Some hedge roots to be removed too but I need some help from Tam to deal with those and for me, June is NOT the month to do hefty work and deep breathing.  I was doing so well on my new stronger antihistamines, and then yesterday had a short walk with Keith by the river and the wind was blowing in my face. I should have gone back to the car straight away, but didn't, and have been struggling with my asthma since.  I didn't sleep much last night, so today I will have to stay indoors as much as I can and hope I can avoid steroids - incoming rain is going to lower pollen levels, so fingers x'd.  I have just taken my peak flow and it is absolutely normal for me, which indicates steroids are NOT necessary, yet. 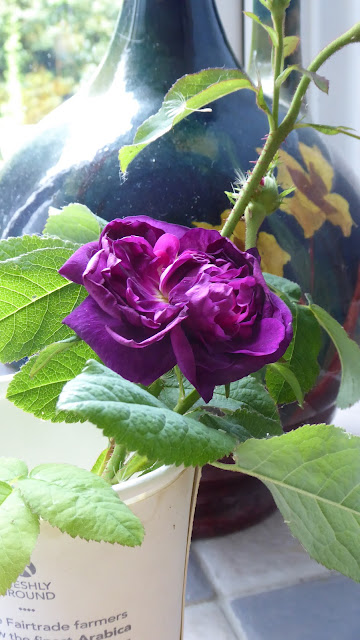 One of my new-to-me roses, Indigo, which had some damage when the lawn was being mowed last week.  Such a pretty colour. 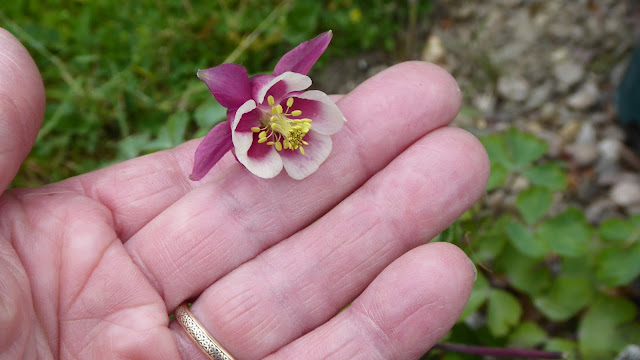 A late-flowering clematis which stowed away in a pot.  Again, one of the more unusual ones which used to grow at our last home. 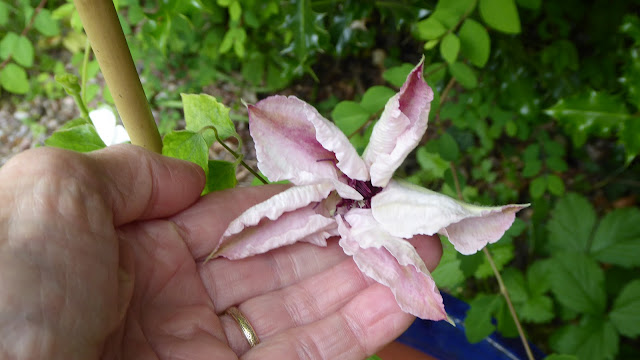 One of the cheap Morrison's clematis - Pink Lady I think. 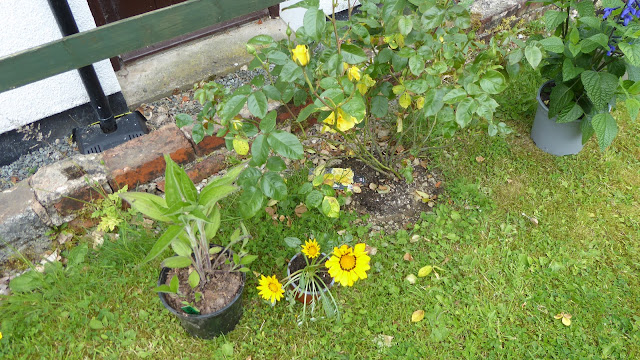 Above and below: Plants waiting to go in when I have done another length of herbaceous border - which will also need to be widened later on, so I don't just have a ROW of plants!!  The roses are patio ones which had been in pots for some while (left by previous owner).  One is a lovely yellow and the other, yet to flower, had a red label. 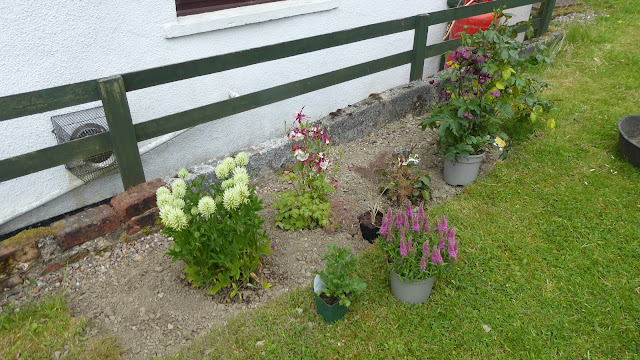 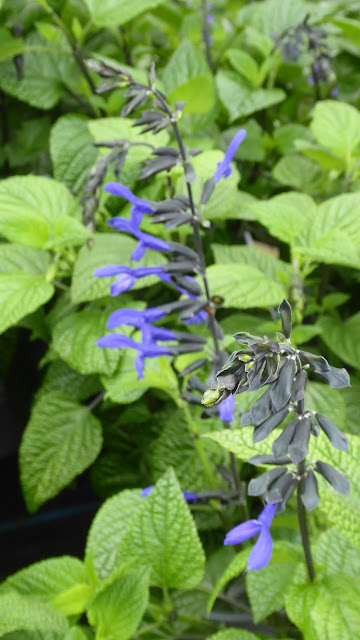 I got this from the Garden Centre, after going n to look for a colourful clematis to climb up the climbing rose by the bird feeders, which turns out to have reverted to plain white (boring) flowers.  However, I was not inclined to pay close on £20 for a clematis in flower now, so came out with this instead, Salvia "Black and Bloom".  I have moved a small lilac clematis in a planter by the rose instead. 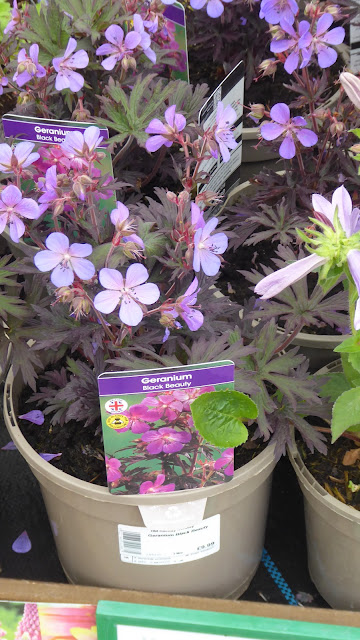 Photographed in close up at the Garden Centre, Geranium "Black Beauty" but I bought mine cheaper from the Plant stall at Hay market. 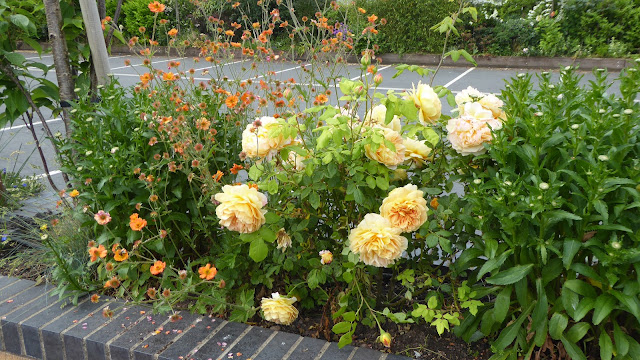 A lovely pairing at the Garden Centre car park - and I will plant my spare Orange Geum next to the yellow rose in the border. 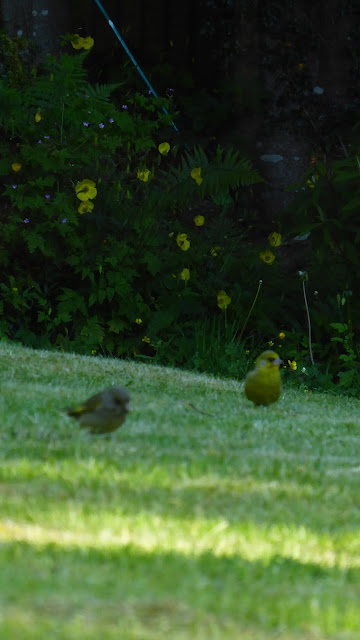 I have mentioned our Greenfinch population before.  Early the other morning the parents bought Junior along to show it round.  I imagine they hissed "Cats" when it landed on the lawn, so they quickly showed it the feeders instead . . . 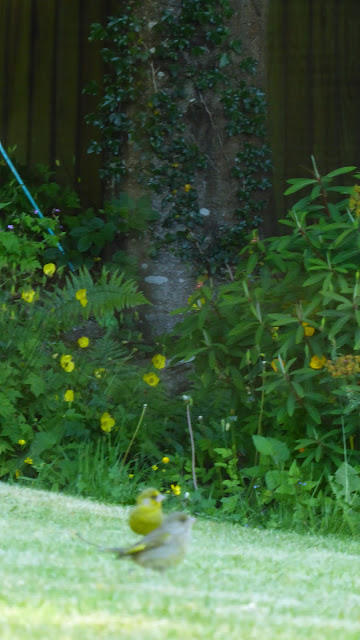 Finally, a Meadow Brown butterfly and a Common Blue, which visited this week. 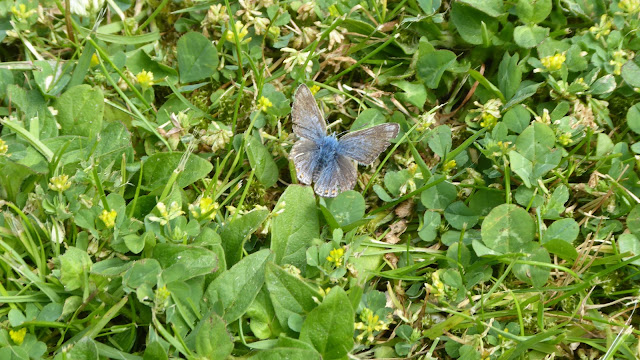 Have a lovely weekend and hope you're not floating away if you live in the UK.
Posted by Bovey Belle at 02:12