What a DUFFER I am! 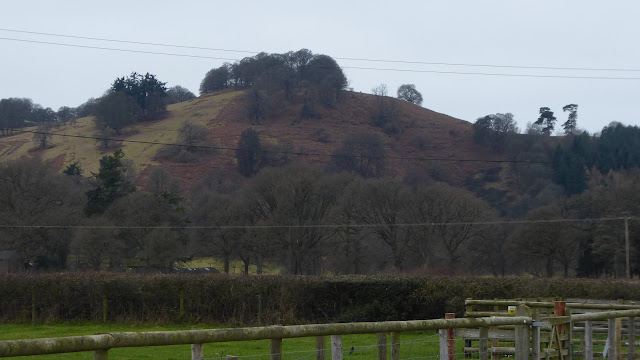 I thought I had best do a quick post as I have had friends getting in touch asking if I'm alright!  Yes, I am, only the 3rd week of January rarely has exciting things happening during it, and this week has been Somewhat Dull, and I have lost my blogging mojo rather.  In fact, I think my brain generally has been turned off.  Yesterday I checked to see when Ludlow Antiques Market was on next, 23rd January I read (it trades on 1st and 3rd Sundays of each month.)  So we got up early this morning and set off across country to Ludlow, only to find the Fair WASN'T on!  I was SO cross with myself, as we were both pretty tired from our early start - we haven't had one of those in a few months now.  Indeed, I checked the dates when we got back and it said it was last weekend, 16th!  So I don't know what the heck I read to get it so wrong. 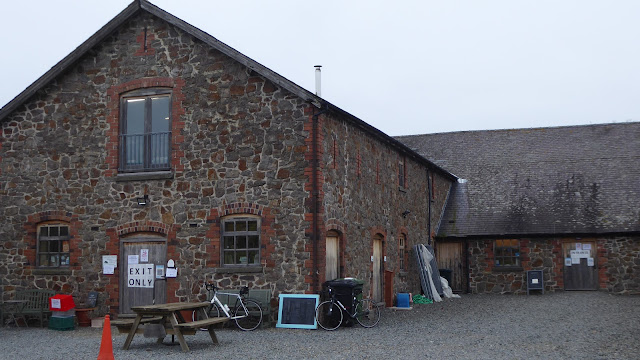 Anyway, we stopped here on the way back, by way of a booby prize.  It's Aardvark Bookshop in a barn on a farm near Bucknall in Shropshire.  (Leintwardine is the next proper village).  Sadly the 2nd hand books were not the sort to take our interest, but we didn't come out empty-handed as we bought these: 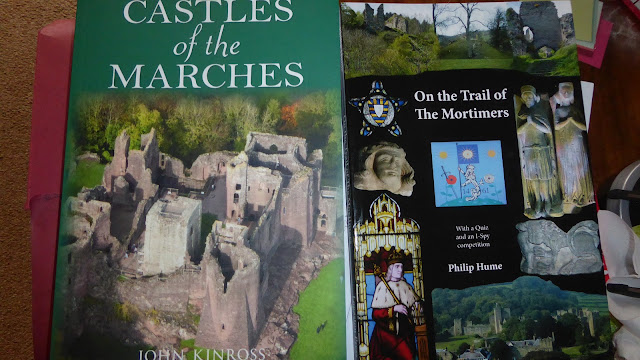 The Castles one is very good, mentioning castles we've not heard of before, and the book about the Mortimers was one which Ragged Robin mentioned on her blog, and I had put on my wish list.  Well, my wish came true a little sooner than I'd expected! 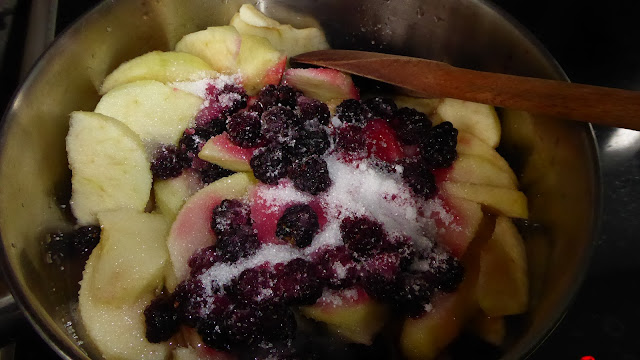 Frosty January days (and nights) just call for comfort food, so I set to earlier in the week and stewed up Blackberry and Apples, using some of my carefully-hoarded local blackberries.  Oh my, the  fragrance of those cooking took me right back to autumn.  I wanted to use up half a loaf of stale home-made bread too, so cut it into cubes and crumbed it - most going into what I shall call Friday Pudding (to fool Keith, as if I said it was bread pudding he wouldn't touch it - FATTENING!)  Anyway, it was a recipe on Jack Monroe's blog   I got THERE because Thelma on her North Stoke blog had mentioned Jack Monroe ranting about the price of food staples shooting up - well of course, there is less margin for keeping prices low when the selling price is closer to the buying price.  Expensive M&S meals don't go up because that margin is so much bigger.  Anyway, I HAVE to recommend this pudding - and even Keith is really enjoying it!!  I have told him it is simply fruit with a few breadcrumbs mixed in, so SHHHHHHHHHHHHHHHHH!  I used frozen raspberries I had in my freezer, plus a few spoonfuls of the blackberry and apple I had stewed along with the half a pint of water to bind it together, and then I pushed lots of big blackberries into the top and gently smoothed the breadcrumb mixture over.  This is the first time in this house that I have seen a recipe and been inspired to make it straight away! I think I am rather down because of worrying about Keith's health - he saw the GP last week and had some blood tests, so we'll see what they say. 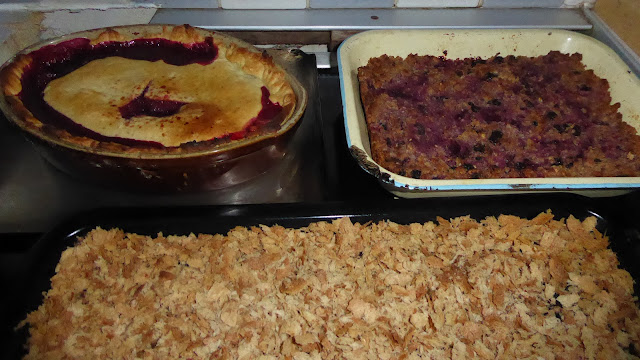 With electricity prices heading for the moon, I am trying to make the most of the oven when I have it on, so here we are - blackberry and apple pie slung in a dish, Friday Pudding and a good tray of breadcrumbs made from the stale crusts. 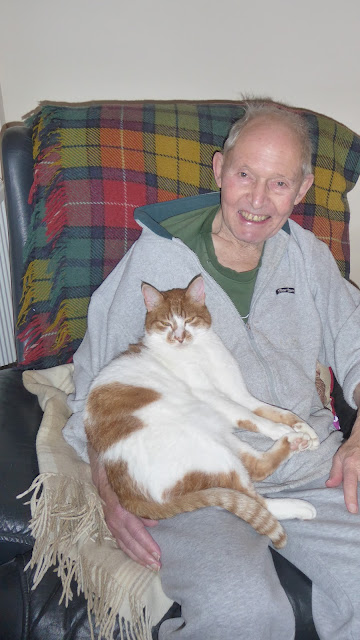 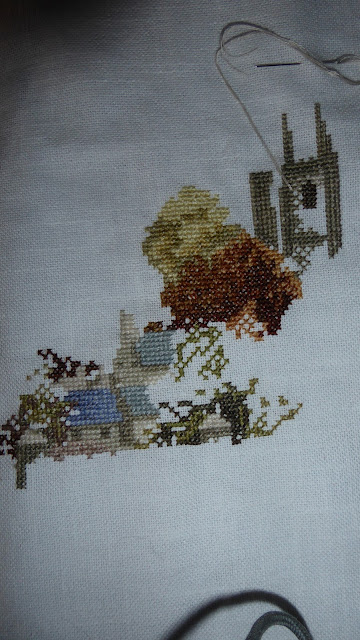 Progress has been made on my Widecombe picture. Now I am on some slightly longer runs of the same colour whilst I am working on the church - known as the Cathedral of the Moor.  It dates from the 14th C and is dedicated to St Pancras, so always makes me think of the railway station of that name!  It also makes me think of The Great Thunderstorm there in 1638, when it was struck by ball lightening which struck through the roof and rolled down the aisle, killing several of the parishioners worshipping there.

Well, having written that I am going in to relax and sew some more whilst watching the Sunday afternoon racing.