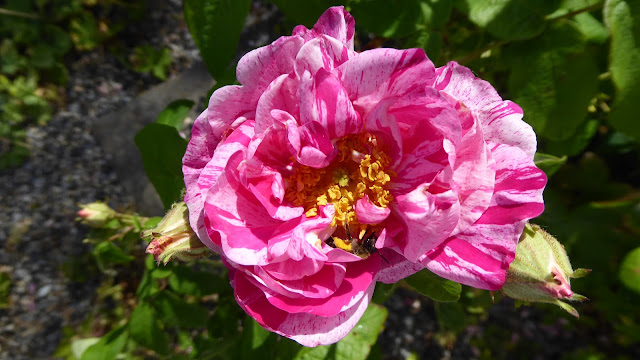 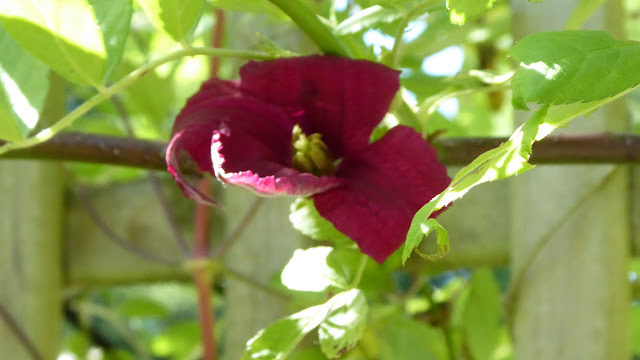 Another cheap supermarket clematis (£1.49) - Madam Julia Correvon, who I believe is blooming for the first time (now I've remembered she's there and watered her!) 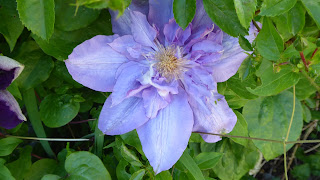 A double blue Clematis whose name I have lost. 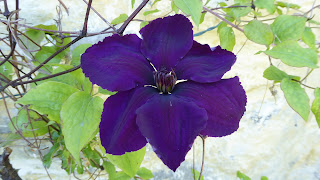 Living nearby is this splendid violet hued one. (Also nameless). 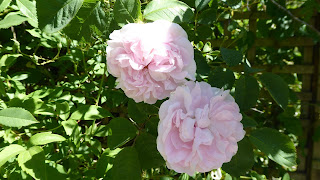 This is my "French rambler" - I have forgotten her name several times but checked today and she is Adelaide D'Orleans, with the most subtle perfume. 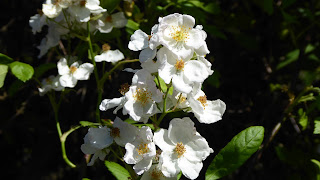 My Banksia rose along the trellis.  This came as a young plant (tip rooted) from Frank and Jan at the Mill, and the original plant came from Gelli Aur. 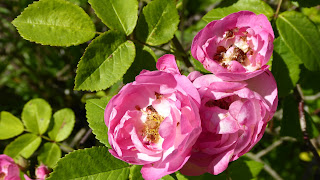 The beautiful globe-shaped blooms of Raubritter, in the paddock plot. 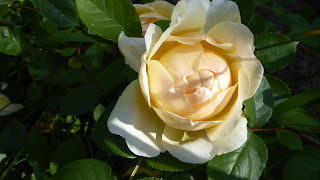 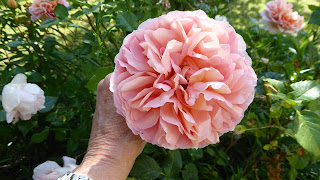 The label on this when I bought it was Graham Thomas (which is bright yellow, so this was wrongly labelled). The nearest I can get to it is a possible Gentle Hermione, but it isn't really a clear enough pink, having a touch of gentl bronze to it.  Suggestions anyone? 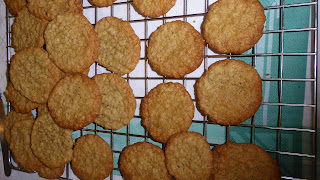 I was in a baking mood - even before breakfast, so set to and made another batch of Oaty Ginger Biscuits (recipe from Tracy I think). 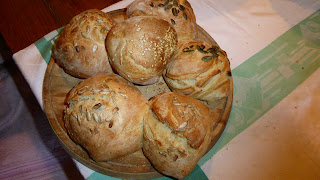 Crusty bread rolls, all done by hand today for a change.  Yummy! 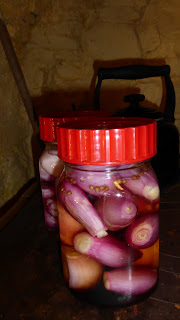 I bought a kilo of banana shallots last week and turned them into fresh pickled onions.  With my asthma as it is at the moment I didn't dare make hot spiced vinegar, so have just added some pickling spices to the cold vinegar (which was mostly distilled vinegar and a splash of malt, as that was all I had in the cupboard and it needed using up anyway).
Anyway, today was the last of the hot spell before some rain is due to hit tomorrow, so we decided to make the most of the sunshine (pollen be damned!)  I took half an Actifed to control the effect of the pollen, sat in the rose arbour, and had a glass of something sparkling with Tam which was lovely.  I also used the Hay Max around my nostrils and under my eyes to stop the pollen getting to me.  I thought I would follow the Dr's advice and just take a week's worth of Steroids, but late afternoon yesterday my lungs complained mightily (It's HIGH POLLEN TIME!) and I had to take some belatedly, as my peak flow had suddenly dropped again.  This time of year is a PITA - I have to change my clothes when I have dashed around outside (and really I need to be inside 98% of the time), I wash my hair every night when I have a bath, and no clothing or bedlinen can be dried on the line.  So it will be 10 days on full steroids, and then counting down by one a day.  It can't be helped, this is the way of things for me each summer.
At least Tam didn't have to do a mercy dash today as she had to yesterday afternoon.  By 1.30 I realized I'd not seen Alfie - he is normally back by then even if he has been hunting.  I went into the yard and called him and there was the most PLAINTIVE of meows from down by the stream.  Each time I called him, he wailed - we imagined him stuck up a tree, injured (the bull and 8 or so in calf cows are in the field), etc.  Tam quickly got wellies on and grabbed a top - a bright pink one as it happened - and sped across the paddock, scrambled over the stream and into the top field, and realized that the bull was at the bottom of the field and not the top.  He took a couple of steps towards her and she flung herself over the fenced triangle in the corner, into the nettles and brambles.  When she looked over the fence into the stream, there was Alfie saying, are you going to get me out then?  It's too steep for me!
So she had to retrace her steps, along the stream bank this time, across the big root which we used to cross with feed buckets when we had the horses, and by the time she got back to the yard, sweltering, prickled and stung, there was Alfie saying, "You took your time!" . . .
Posted by Bovey Belle at 09:49