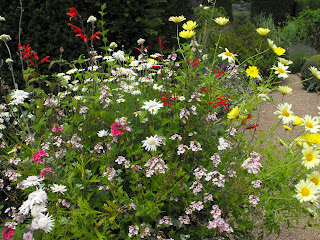 All these beautiful flowers were spilling over a big stone urn . . . 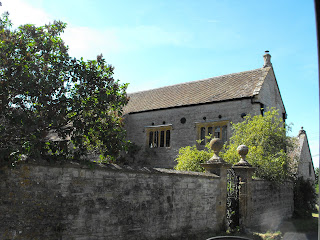 In our house hunting, we stopped in the idyllic village of Curry Mallet. This is the Manor House - just our sort of property! 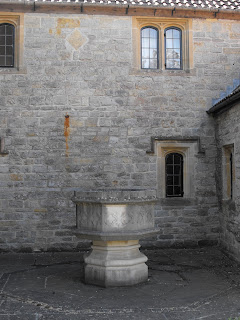 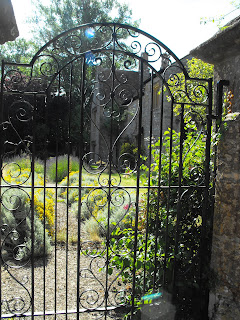 A glimpse of the beautiful gardens. 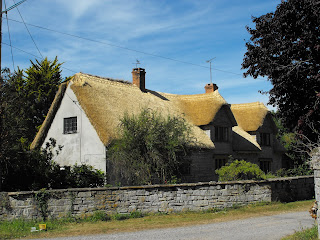 This would have suited us down to the ground too. Recently on the market by the look of things, as it was being re-thatched and the garden had been flattened as recently very overgrown. 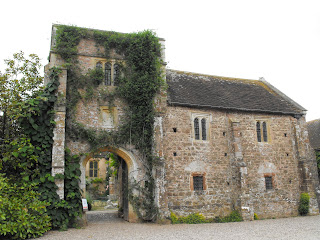 On Friday we killed two birds with one stone and combined a day out at Cothay Manor Antiques Fair with house-hunting, and viewed 3 properties whilst we were in Somerset. We had a complimentary ticket to get in the Antiques Fair, so we got to see the fabulous interior of the house as well as the gardens. I can honestly say, had we the money, and were the property for sale, we would move in tomorrow!!!

The gardens were absolutely amazing too, and I now long for some huge stone urns to plant up as they had - spilling over with sweet peas and all manner of beautiful flowers. I will do a special posting of just the gardens, and can only say, if you have the chance, visit Cothay - you won't regret it. 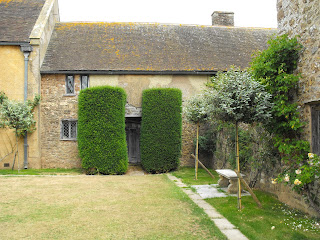 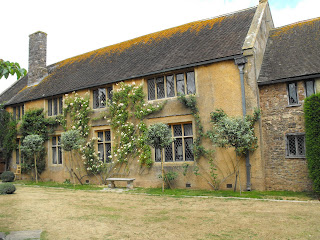 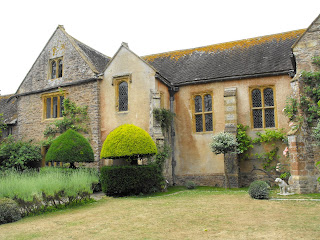 The houses to view were an interesting mixture. We were told, the moment we arrived at the first property, that it was now under offer . . . Just what you love to hear when you have travelled all the way from Wales to view it! It would have suited me, on my own, as it was a smallholding, and the neighbour over the lane sold eggs, home made jam and marmalade and garden produce - I just knew we would get on! OH didn't care for it at all - cottage was too small unless you added an extension(he had a point - OK for us but no room for the larger pieces of our furniture!), but the views from the land across the Somerset levels were amazing. I'd get no work done . . .

The next house was big enough, had a nice atmosphere, and had a fabulous garden (similar plantings to mine, but more formal, and how I envied her Banksia rose) but the compromise was the closeness of the M5, and sadly that was too big a compromise especially as the house needed re-rendering and chimney work done by the look of things . . .

The final property was the "sensible option" for us approaching-geriatrics, as it was a nearly new barn conversion, the end property and with a bigger garden overlooking fields. It had a fabulous kitchen, and was nicely presented, BUT when I asked if the land around was green belt, the agent had to confess it wasn't and indeed, there was further building work scheduled the other side of the courtyard. Sigh.

At least we have ironed out some more compromises which we would accept (attached properties if the right sort, and much newer property with character) and those we wouldn't (too small though in lovely spot, and proximity to motorway). Until you actually view, you can't know for sure what you will compromise on.

Anyway, I have finally got the area by the front gate just about planted up (two new beds). I went a bit mad yesterday and got a HUGE Fuschia to fill a gap and give instant colour, and a lovely red Achillea with yellow centres to each flower, which backs up the Fuschia and compliments it. I bunged in a couple of dozen Stocks which were still languishing in small pots too. Then we had several hours of rain which watered everything in, and this morning we are back to gorgeous sunshine again. 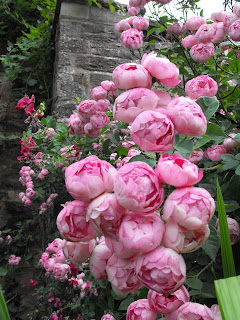 I think this could be Raubritter though it seems like a climber rather than a scrambler which Raubritter is meant to be. One for the next garden methinks . . .
Posted by Bovey Belle at 22:48