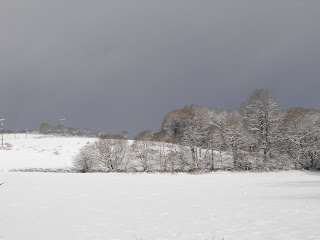 I caught a snippet of a conversation on the radio or television today and it suddenly bought back a childhood memory I never realized I had forgotten. Someone said "catching cobwebs" and in a heartbeat I suddenly recalled breaking a brittle twig off a branch, bending it right over though it always made half-a-hexagon and not an arch, and using it like a dream-catcher to scoop up cobwebs from the gorse and other bushes on the wild land between the abandoned wartime allotments and the brickworks.

In this same wilderness, we would pluck the broad green leaves of the rushes and weave them into mats; in weather like this we would break icicles off the willow boughs and eat them like frozen sweets; we would crush handfuls of Sweet Gale leaves in our pockets and the aroma in the dusty fluffy dessicated leaves would still linger, months on.

When we were thirsty in summer, we would break open a fat stem of what we called French Rhubarb (Japanese Knotweed) as it stored water at each joint, and we even ate the tender tips when sufficiently hungry. Usually though we would scrump from a neglected orchard - I can remember not eating plums for years after eating so many I gave myself the collywobbles. An abandoned 3 acre apple orchard fed us for weeks. The abandoned allotments provided strawberries, raspberries and currents in abundance. In the spring of the year we ate "bread and cheese" which was what we called the young Hawthorn leaves. In June we would be sucking on the bottom of the Honeysuckle blossoms for the sweet nectar they held.

One clear starry night when it had snowed, we got out tin trays and sleds, and scorched down the pathway between the gorse bushes, past the Sweet Gale and the summer camps, to land laughing in the bracken. Happy times.
Posted by Bovey Belle at 08:20