Going Back to the Old Ways

Two of our three "wild kittens"! Alfie and Tippy have made themselves thoroughly at home now! 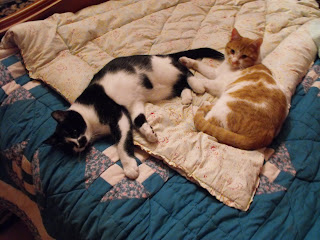 Yes, I know it's Christmas Eve and everyone is mince-pieing, pooking presents, lifting glasses, having the oven on 24/7 and listening to carols, and enjoy all that I say. I shall be making mince pies shortly and baking as I listen to the Carols from Kings College, Cambridge on Radio 4 this afternoon

However, there was something I heard on Sky news this morning which REALLY dug deep into my psyche. They had been interviewing a postie in Donegal, I think it was, who said he knew what the weather would be like because his horses came closer to the house when there was going to be bad weather, and if it was going to snow, then the Robin would come close home too. So much for the Met. Office prognostications I thought. Then they interviewed one of his neighbours who said that the Recession was making people go back to the Old Ways. There were people planting potatoes last year who had never been known to grow anything. There were people keeping chickens again, and she for one was glad to see a return to the Old Ways. The interviewer made a remark about these folk keeping their culture alive. How I agree with that lady's wise words and the interviewer's concept of it keeping their culture alive, and I intend to be doing the same in 2011, and backing firmly away from the cliff-face of modern living.

I will end with the picture of a grandmother I came across recently, who had sat on the floor in the corner of Tesco's where they sell children's books, and she was reading one to her grandson, who sat beside her. She didn't give a damn about what anyone thought (least of all the Management!) and the little boy was ADORING the story. That's the sort of grandma I would like to be - though perhaps, not just YET!

Merry Christmas one and all, and I really WILL post that recipe later, I promise!
Posted by Bovey Belle at 05:55