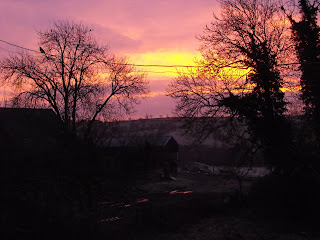 The header photo, and this one, were taken within minutes of one another this morning. I dropped the sash window open to get a better view, but gosh, the rush of cold air nearly took my breath away.

The last few mornings we have had a hard frost, though today was marginally better and it is slightly milder out now. It will take the house a few days to catch up though, as its thick stone and rubble walls have absorbed all the cold.

I was back to volunteering yesterday and enjoyed myself, although it was very quiet - just half a dozen people arrived during the time I was there, and four of those were regulars and just there for the cafe. So I sat quietly, waiting for more customers, reading a book of short stories I'd got from the mobile library a couple of hours earlier. Rather odd little stories, not without merit and capturing the little idiosyncrasies of the human spirit, by author Margiad Evans who spent most of her - short (1909 - 1958) - life in Herefordshire, near Ross-on-Wye, an area I am familiar with myself. I picked it off the shelf because the commendation on the jacket described her as "A close observer of nature, her descriptions of trees, water, rocks, the movement of air and the interplay of light and darkness, are both exact and fluid." I tend to be complacent with my choice of leisure reading and a book of short stories is easier to pick up and put down.

It was a bright sunny - if cold - day, and the view across the Deer Park was magnificent. I kicked myself for not picking up my camera as I had meant to, as a couple of dozen deer grazed the parkland, and the layered skirts of a massive Cedar of Lebanon showed inky-green against the washed out pasture and the paler trunks of oak, ash and chestnut which thrust branches up against the Wedgewood blue of the sky. I jotted down: "spindrift fingers of sunshine sent golden echoes beyond the trees, and spread a gilt nimbus around the deer." A belated River of Stones entry for the week . . .

As I sat and read and pondered, I was subliminally aware of the noises of people talking quietly in the corridor, of the music played in the Drawing Room (the Polka had my feet dancing), and the heavy deliberate ticking of the Grandfather clock across the hall from me and in my mind's eye, people from the house's past wandered by, preoccupied in their own spent lives, their emotions just a whisper held in the fabric of the place.
Posted by Bovey Belle at 08:18