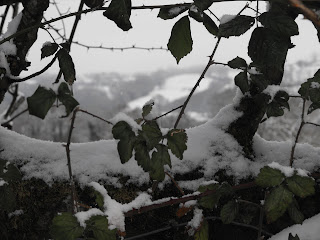 Sometimes my memory is jogged by something and becomes stuck like a needle in a groove, hiccuping over and over the same link, finding something different each revolution. Here is one such memory.

We were 16, Tricia and I, when we were lured into the winter night by a snowfall and a full moon in a clear, clear sky which ripped the stars from their anchors and bid them play. The amber-paved streets passed beneath our feet as we left the lights behind us and cut across the Strawberry Field to Mr Starke's. It was light amongst the birch trees, and their elfin twigs supported no snow and showed like dark veins against the snowfall. A dark shadow hid the rotting remains of the ancient side-saddle in the recumbant shed. An old tin bath peeped from beneath a meringue of snow. The moon showed us that we had been preceded by wildlife, showing bird tracks and fox prints beside the fence. 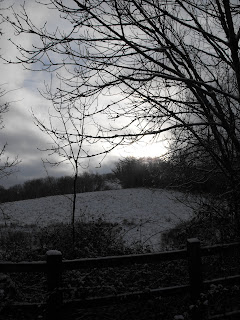 The trees in the copse were the colour of wood-ash, lit by a reflected glow. Not the smallest breeze stirred the ivy which swarmed up the creviced bark of the oak tree where we crossed the stream. The moon splintered into fragments between the trees, and showed us sleeping zebras in the snow.

Heads shot up as we climbed the slope and grazing ponies were aware of our stumbling footfalls and heaving breath. The old hunter mare and her yearling were the first to approach, blowing clouds of soft hay-scented breath at us as they drew near. The moonlight showed her gaunt shape and the filly's toast-rack ribs. No extra feeds for gypsy-stock. Nicky, Cheeco and Maize crowded up, hoping for treats, and nudging our pockets with muzzles as warm as velvet cushions. In the periphery, Amber, wild as a hawk and twice as beautiful, hesitated for a moment, before deciding we were not the threat we were in daylight, and approaching us. We fetched a flake or two of hay from beyond the fence, and shook it across the snow, so there was a mouthful for all. We proffered it to her. Hungry, she grabbed a mouthful and stepped back, but then, to our amazement, stepped forward again and we touched her for the first time, running our frozen fingers down her tangled mane, stroking her shoulder and feeling no fear in her. Other ponies appeared from the shelter of the thick Hawthorn hedge and we threw over more hay.

The old grey mare, Cindy, glowed in the moonlight as she hobbled to another pile of hay, doomed to perpetual motherhood by a shoulder injury. Corinne followed her like a shadow, matching her mother's stride, and then they fed, noses together.

Never venturing near, little chestnut and white Tangy tit-tupped like a clockwork pony at the edge of the herd, still terrified of people. He wasn't to know that his life was ticking away, like the second hand on a clock.

I swear time stood still - that old cliche - in the magic of that moonlit night. None of us, human or pony, knew our futures - they had yet to unfold - and many of them holding heartache and tragedy - and for little skewbald Tangy, death . . . 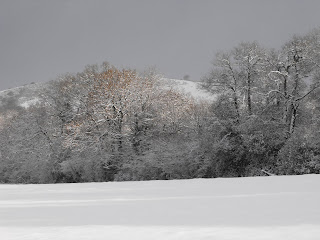 Labels: walk in the moonlight;