A day at the horse sale 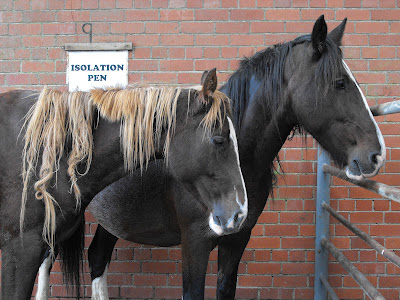 Sorry about the dearth of postings this week but I have had a busy week, one way and another.  Now today I am feeling hornswoggled after a really good day out at the Antiques Fair up at Builth yesterday, but more of that later.

On Thursday I took myself off to the Horse Sale at Llanybydder.  I forgot my camera, so I will just put up a couple of photos from previous years. 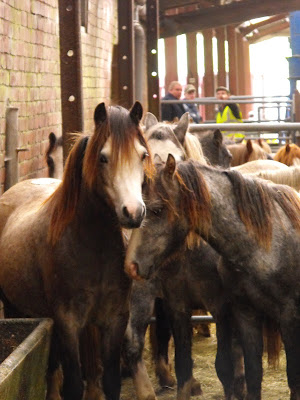 I suppose it is a good thing . . . in a way . . . that the horse sale here is a shadow of what it was in pre-Passport days (horses cannot be sold without a legitimate passport, which documents their markings, colour, distinguishing features etc) which, since it costs money, has partly quashed the indiscriminate breeding of feral ponies.  Ponies which, sadly, often had only one new owner, and that was the meat man.

Now, whilst there are still some ill-bred, unhandled, poorly fed horses and ponies coming through the sales, their numbers are less.  It is still a dumping ground, however, for horses and ponies with medical problems (some unseen without an x-ray - beware the flashy 16.2 hunter which has a wonderful track record under saddle but sells for 400 or 500 gns as it probably has been diagnosed with something incurable - navicular, blindness, wind problems, kissing spines, arthritis all spring to mind.)

Others have behavioural problems - did the "backed and turned away" 5 year old turn out to be a nutter, or just badly started?  Sometimes there is a clue in the wording of the catalogue, for instance, "has been known to buck" or "not 100% in traffic" or "strong ride" or even "goes all day without stopping"!!!  There's presumably no legal come back then . . .  Known vices are supposed to be mentioned - "has been seen to crib", this demonstrated by the horse grabbing on to the metal railings in desperation.

You do get some decent Welsh Cobs going through on occasion, and there are some nice unspoilt youngsters at times and bargains to be had.  Some of the entries are distress sales where people can no longer afford to keep their horse or pony and these may find good homes.  Some ponies are saved from the meat man - a friend bought an elderly and starving little grey Welsh brood mare and gave her four happy years before she went over Rainbow Bridge.  Indeed, our own Itsy was rescued from there and bequeathed to me and is now in the most wonderful forever home, so there are good outcomes at times. 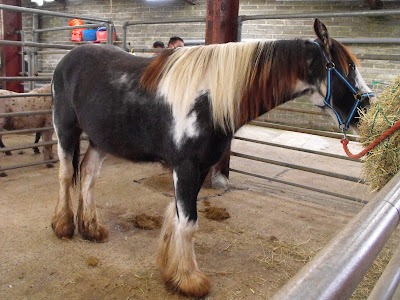 Coloured cobs like this chap are the life-breath of Llanybydder, although the prices they are expected to fetch (often by Traveller owners) are shall we say, exorbitant at times. 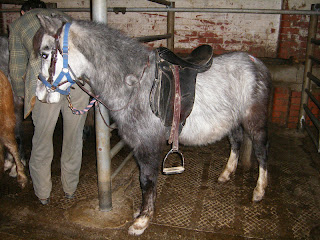 Tack is obligatory for horses and ponies considered "broken in".  It is often as old as the hills and quite frequently fits where it touches - either hideously large, small, broken-treed and I've seen bits literally hanging out of ponies' mouths before now.

I do not allow myself to think about the fate of the horses and ponies.  Some I know go for meat.  Some go to less than suitable owners.  Mares (of whatever shape or persuasion) can always be bought to get a foal from and just turned out and forgotten all winter.

Hooves are usually in shocking condition - one horse last week has feet which had grown really long and then chunks were broken off.  A dark brown brood mare had such shocking sand cracks that some ran from the coronet to the ground and one hoof was split so badly she was almost cloven-footed.  She made under 200 gns. . .

Anyway, I went principally for the tack sale, so missed out on what prices horses were fetching, but I did see an unbroken 3 year old unreg presumably Welsh Cob colt of about 14.1 or so go for just 50 gns.  Had you seen his conformation you would have understood why he went so cheaply . . .