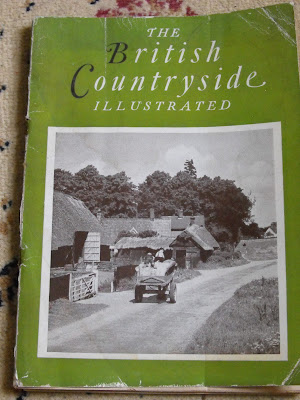 The cover picture shows Barley being carted at Rickling Green in Essex.

The day started as most Saturdays start, dragging myself out of bed as the alarm insists it is time to get up.  Which wouldn't be so bad, except it was 6.15 and I had been awake between 3.40 and 5 a.m.  Sigh.  I really did NOT want to get up and my OH was like-minded!  Still, car boot sales wait for no-one so we had breakfast and set off, and indeed, were early enough to bag a few bargains.  I spent all of 20 pence (!) on a lovely little book which was just waiting for me to happen along: The British Countryside illustrated.  It has a soft cover (a little like an old exercise book), and illustrated throughout with black and white photographs and probably dates from the 1930s.  The previous owner has noted beside certain places, when they were visited.  London was the most frequently visited - Oct 1927, Aug 1936, July 1937, July 1942, Aug 1945 and Aug 1950.  I should have thought the July 1942 "holiday" there may have been a bit hairy!  Ilfracombe, Land's End, Tenby (twice), Llandudno, Blackpool were also holiday destinations, some of them quite late in the season - October or November. 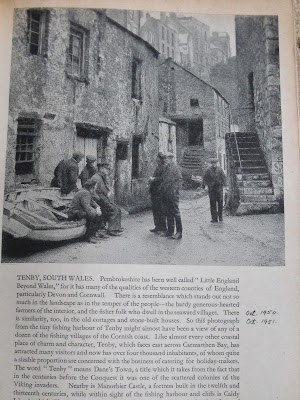 Tenby, bearing more than a passing resemblence to Victorian Whitby!  It has been polished up a bit in recent years : )

The photographs show the British countryside which I can just remember little snippets of when I was growing up in the 1950s.  The Botany Bay gypsies still used one or two of their heavy cobs for ploughing, and still drove them to a "trolley" to get about to the bits of land they had.  Horses pulled the milk floats, though milk was in bottles by then of course, and there was a little rag and bone pony called Sally - a chestnut with lots of white on her legs and splashes on her tummy and the filthiest greasy coat you could imagine.  Shires pulled the Corporation dust carts in Shirley in Southampton.  Country lanes were still largely quiet with traffic, and the  photographs evoke so many memories of unmodernized farmhouses still being lived in by actual farmers, barns being used for storage of hay or straw, and although I remember a small-bale harvesting of hay (unlike the big wrapped bales common nowadays), no-ne was still using the old-fashioned reaper and binder any more.   It was a peaceful countryside I recall, one we could safely run wild in.  That's why I am enjoying the Wartime Farm programme so much, as it is so reminiscent of my childhood, and I recognize things like the Tilly lamps (which we used in powercuts), open fires, chopping wood for kindling etc, a "copper" for washing day, and a mangle for getting the worst of the water from the clothes and sheets. 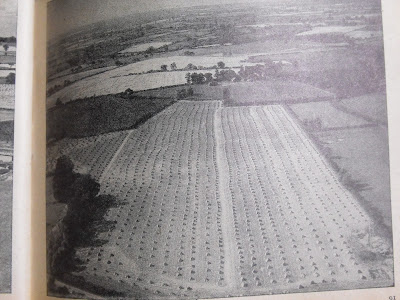 A scene from a byegone age, though I can remember seeing a field of stooks like this in Dorset before we left.  It had been grown specifically for thatching, I believe, using wheat which was much longer in the stalk.  It was like stepping back into Thomas Hardy's Dorset.  The above photo, however, was taken near Ipswich, in Suffolk.

Anyway, this won't get anything done.  I have chutney all prepared and ready to be cooked, so I had best get changed from my decent clothes into ones which need t be washed and will be once they are reeking of Green Tomato Chutney!
Posted by Bovey Belle at 05:04