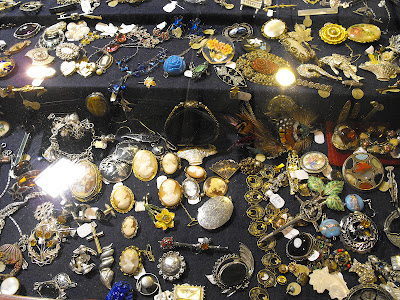 Well, an interesting few days for us here.  We have woken up to October this morning - still grey and wet out there, but that's nothing new!  I have also woken up to a peak flow of 440 - and this is BEFORE medication!!!  I am thrilled to bits, as it means I am finally on the mend and my lungs aren't so bad they are incapable of improvement.  I can only put it down to walking up the steepest hills I could find last week, which - although far from enjoyable and blardy hard work - has expanded my lungs and helped to clear them.  In a week's time I have my respiratory tests at the Hospital, which have to be undertaken without medication, so the fitter I am, the less distressing these tests will be.  After the initial ones, I will then be given Ventolin and I have to do the tests again (Ventolin will help me to breath more easily).

Anyway, we had a good wander around two car boot sales at the weekend and got some useful things, including a box of 10 small Kilner jars for £2, which were just what I needed, though I will have to fork out for new lids for them.  I haven't been able to bottle any fruit until now, because buying in the jars etc new is prohibitively expensive.

We took a stand at the Antiques Fair/Fleamarket yesterday and were fortunate to get a stall inside, as there had been a cancellation.  The forecast had been bad and the light showers turned into heavy rain by lunchtime and the folks outside were rained off.  I came home with a new-to-me piece of Torquay pottery, which I am hoping may be a Bovey Pottery piece (Bovey Tracey was my dad's home village) - it's a big blue jar with a raised motif of kingfishers, beautifully decorated, and we haggled it down to half the asking price in the end as it was missing a lid.  I can live with that!  I had looked at other pieces of Torquay pottery, and there was a little 1920s pinch jug that I liked but I didn't dare to spend before we had sold anything and when I looked later in the day it had gone . . .  In fact, ALL the Torquay ware had gone bar "my" jar and a large hat-pin holder which I didn't like anyway.

Oh, and remember that little tabby cat?  Well, it turned up at feeding time last night and is a poor little half starved kitten, about 6 mths old I'd say.  Not too terrified of people (it got close enough for me to have touched it, but I didn't want to scare it first time we "met".)  Anyway, it had a good scoff last night, and spent the night in a box of scrumpled up newspaper in the porch, and had a hearty breakfast this morning.  It is sneezing and has a cold though, so I shall have to keep an eye on it.  May need to tempt into a cat box and take it to the vet.   Sigh.  But I cannot watch it starve to death in front of my eyes . . .
Posted by Bovey Belle at 23:56