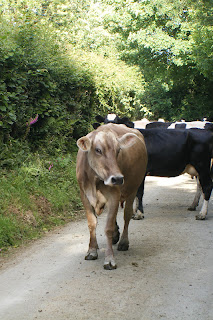 That sounds a ridiculous statement, but when you live next to a dairy farm, you have plenty of chance to observe cow behaviour, for good or bad.

I can always tell when they have the boyfriend working of the lass who does the milking.  The cattle will come down from the fields making a din, obviously unhappy, and their noise is accompanied by a regular beeping of the Landrover's horn, as the very impatient boyfriend (who HATES cows and anything to do with them) chivvies them along, nearly hitting the halt and the lame who bring up the rear with the front bumper of the Landy.  When anyone else brings them in, they are quiet.


We get an awful lot of racket when there the calves are separated from their mamas too.  The calves are left with them for a couple of days and then they are seperated, and the calves come to live with the earlier ones, and mum is left to her own devices.  Reluctant to leave her calf initially, she wanders round the yard at night, bellowing non-stop (they don't even seem to pause for breath!) but after a couple of days she will join the rest of the herd when they go back out to pasture after milking, seemingly forgetting she ever had a calf at all.

But the MOST noise you get from the herd is when they are doing something they aren't supposed to.  This morning, they were meant to be in Park field (I think).  Anyway, I knew they were somewhere they weren't supposed to be (a field along) when I could see them on the horizon, all bellowing fit to bust and obviously so delighted they had made a bid for freedom that they had to tell the world about it.  Next Door will not be pleased as it means fence mending is on the agenda, quite apart from getting them all back where they were meant to be.

Meanwhile, I am giving myself a break from walking today and plan to pick more apples and work on the garden.  Have a good weekend.

Labels: the habits of cows.