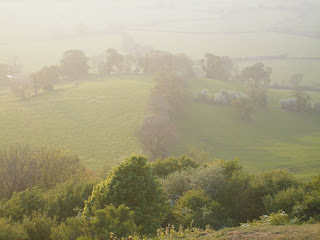 Amongst the many delights to be sampled in "A Cotswold Christmas" compiled by John Hudson, is this extract from C Henry Warren's book "A Cotswold Year". He moved to the Cotswolds in 1932, following a career in the army and then teaching. I shall divide this extract into two parts, the first of which deals with a Christmas bus journey:

December 23: A 'bus ride in a remote country district is always an adventure, but never quite so much an adventure as just before Christmas. I was out in the heart of the Cotswolds and wanted to get to Cirencester, a journey impossible by train and only possible by 'bus if I could make two awkward connections fit in. All told it was under fifteen miles, but I shouldn't have bumped into such a variety of people in ten times that distance on a train. At all times rural 'buses are rare provokers of good fellowship: no matter how disgruntled the passengers may when they get in, before they have gone far they have all been shaken up into such a mood of friendliness and good humour that they seem prepared to tell their neighbours almost anything about their most private lives. But on a day like this, when Christmas is in the air, good fellowship is even more than usually rampant. The first 'bus I got into had been decorated behind the driver's seat with a couple of mistletoe sprays lavish with berries. I suspected the young conductor, for no doubt he was a wit. At one stopping-place in a village a young lady got in, smart in a townish sort of way that somehow didn't fit the scene. The buzz of conversation immediately stopped, and everybody stared at her whilst she made her way to the only empty seat in the 'bus: it was just behind the driver and under the mistletoe. There was a suppressed giggle or two, and then the young conductor started whistling If You Were The Only Girl In the World, and winked knowingly at the rest of us. Everything was a joke to him. Even when one of his name-boards fell off the rack (where he had placed it none too securely) on to a passenger's head, he simply laughed and said: 'I'll let you off with a warning this time!'

The second bus was no less festive, though I missed the mistletoe and the gay young conductor. Near me at one time sat a friendly old man who was the very image of (the Prime Minister) Mr Baldwin. A woman got in, whom he knew. She had on her head what appeared to be a clergyman's flap hat. My neighbour greeted her loudly and cheerily with: 'Good morning! How's the arm?' She paused on her way to her seat, clutched at the nearest support and glared at him. 'It was the foot!' she said indignantly. And when she was seated she launched on a tale of broken bones and accidents and funny feelings and sal volatile that lasted until she got out at her destination. Two boys were having a fine time with a large electric bicycle lamp which they had just bought. It was so large and splendid that they simply couldn't resist flashing it on; so they shone it into one another's mouths to see how far down their throats they could see. Then there was a pale and serious clergyman who was being taken into the town by his wife to do some shopping. He was one of the shyest men I have ever seen, and obviously embarrassed to find himself jostled about with such a loud lot of people; but his wife was quite oblivious of them. She was very much concerned as to what money she ought to spend on almanacks and suchlike little gifts for the parishioners. Her husband tried to dismiss the matter as quite unimportant; he didn't like talking about such things in front of other people. I could see from his wife's insistent preoccupation, however, that a few pence more or less mattered a great deal. Theirs was the genteel poverty of those who have a reputation to keep up, and nothing to keep it up on. 'You haven't thrown away the tickets, have you?' she asked him presently, careful of everything by sheer force of habit. 'No, here they are, dear', he answered meekly, pulling them out of the palm of his dingy suede gloves. And for the remainder of the journey they were silent, unable to bridge the barrier between themselves and their fellow-passengers, the only silent people in the 'bus.


Many thanks to Bob Jagendorf over on Creative Commons who took this atmospheric photograph of a Cotswold lane.