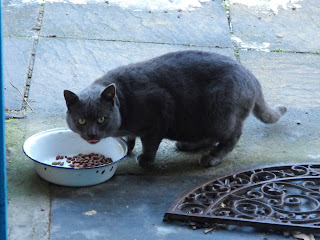 We managed to "loose" a cat over Christmas. Mislay even. . . .It was the dark grey feral tom who D called Boldr (don't ask, think Norse Mythology) and we call Smokey Joe. He had managed to come into the house (OH had left mum's back door open). Anyway, we thought he had been chased back outside again. But he didn't turn up on Christmas Day, or Boxing Day, or Boxing Day plus 1 . . . Oh poor cat I thought, he has been Shut In Somewhere, over at the farm (this has happened before with Amber, the other outside cat.) Anyway, we were sat watching Come Dine With Me this afternoon and heard his unmistakeable yowl of "feed me"! I went outside but no sign of him - daughters had gone the opposite way and seen a grey tail disappearing downstairs to mum's old flat. We found him Under The Bed, so put out some grub and opened the back door. Thanks very much he said, ate the food and retired back under the bed. Since we could hardly NOT notice the dreadful pong from the inglenook (where all good tom cats do their ablutions apparently), we decided the only way to turf him out was to move the bed. He shot out like greased lightening and then turned up 2 minutes later on the upper kitchen windowsill, demanding seconds!