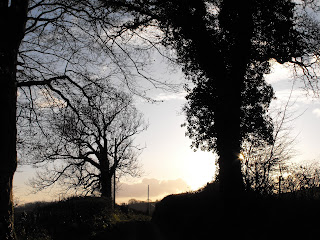 This is taken from A Hampshire Christmas compiled by Sara Tiller:

'In 1786 The County Magazine declared itself to be 'particularly dedicated to the inhabitants of Berkshire, Dorsetshire, Hampshire, Somersetshire and Wiltshire.' This extract comes from the 1788 edition:

"There are many good old customs appropriated to this season of the year, which, although banished by the refinement of the metropolitans, are still preserved in various parts of the country as introductive of harmless mirth, and emblematic of things almost forgotten.

On Christmas Eve it is still a custom in the North to light candles of a very uncommon size, which are called Christmas Candles; to burn also a Yule log, or Christmas block thus illuminating the house. The custom perhaps borrowed from the Saxons; they began their year on the 8th of the calends of January which is our Christmas Day. The night before was called by them 'the night of mothers' and was observed by them as sacred. The log, perhaps, was burned in imitation of the son's return.

The origin of Christmas boxes is said to be this: The priests said masses for everything. If a ship went on a distant voyage, a box was fixed to the mast and consecrated to some saint. The mariners were expected to put money into this box that masses might be said for them on their return. The mass was then called Christmas; this particular box, the Christmas box. Many other customs may be enumerated: the Christmas card; Christmas pies. At the Universities it is common to hang laurel in all the colleges and chapels, which when we consider that the laurel was emblematical of peace and victory, is easily explained. One of the earlier councils forbade Christians to deck their houses with bay leaves and green boughs - but there is, thank heaven, no restraint upon what leads to cheerfulness, and the careful cook may enjoy her mistletoe without fear of being disturbed by the censures of the church."
Posted by Bovey Belle at 03:54