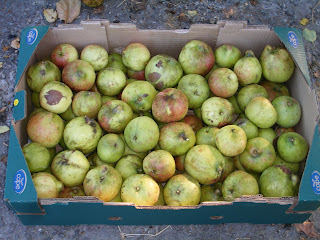 A little treat arrived today. I didn't go mad on the spending - it only cost 4 pence, plus the £2.75 postage from someone selling through Amazon. It's Henry Williamson's "The Pathway", the 4th and final part of his series The Flax of Dream. Despite having several books started at present, I couldn't wait to start this too . . . Let me give you a little taster and you will know why . . .

Down the passage from the distant hall came the muffled franging notes of the grandfather clock striking eight times. Seven o'clock already! In half an hour it would be supper time, and the potatoes were not even peeled. Mary had thought that morning to give them a squab pie for supper, but always there had been other things to do, and now it was too late. She opened the door of the oven, and saw that a light brown crisped skin was formed over the rice pudding in its china dish. Apples!

Taking a basket and an old brass lanthorn from tthe dresser she lit the candle, and wen out into sparkling starlight to the woodshed, climbing the worn broad steps to the apple loft, a place of limewashed walls flaking lose into cobwebs, and rows of shelves holding apples resting on straw, each tray marked by a piece of cardboard tcked on it. There were rows of Annie Elizabeth, big yellowy-green ones; Scarlet Leadington, very red and too good for cooking; Lane's Prince Albert, which were green and would keep until April. The straw-laid trays of an entire wall were packed with pippins - Cox's Orange, Wyken, King of the Pippins . . .
Posted by Bovey Belle at 12:00

Labels: henry Williamson; The Flax of Dream: The Pathway; apples.