Day out at Builth 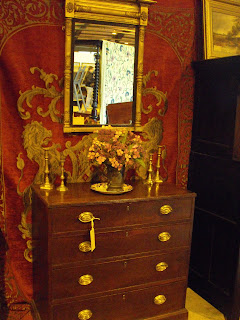 We had an unexpected day out yesterday. We had been sent a complimentary ticket to go to Builth. But we were skint. And the car had been playing up (beware orange engine-shaped lights on the dashboard). We SHOULD do a car boot sale. Then we listened to the weather forecast (rain coming in around late morning). Car boot sale off then. (One shower was apparently all that arrived in the way of rain!) Should we, shouldn't we? We thought, oh hell, packed a car picnic and went anyway. The engine had been given some medicine which you add to the fuel (a caustic cleaning mix) and another bit had been cleaned. It needed testing. Fingers crossed, but it "may" have worked. As we're off up to Sheffield twice in the next week, let's hope it HAS worked. We spent £2.50 between us at the Fair (!) on an OS map of Manchester for OH and 3 metres of braid to go around a stool I reupholstered.

It was a lovely day out - everything and anything is offered for sale there, as you can see! And we even found a replacement for our washing machine if new bushes don't do the trick . . . 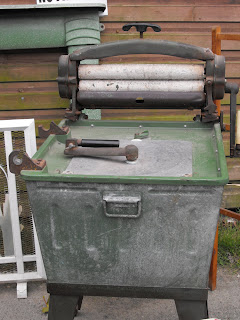 I haven't the foggiest what the story is being told here on this carved chair. We suspected the seat was carved at a later date though. 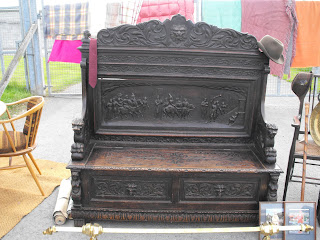 Isn't this sweet? I might have taken to ironing earlier if I'd had this set when I was small! 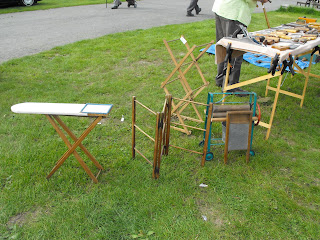 The Fleamarket side of the Fair is what we enjoy most, rather than the beautifully-orchestrated stalls in the front sheds. You never know what will turn up. The prices often bear absolutely no relationship to the value of the item on offer. (More than £20 for a glass sweetie jar really is a little excessive I feel . . . Not on this stall, by the way.) 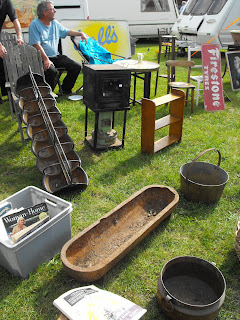 Some of the display cabinets had a proper hotch-potch of items for sale Anything from netske to teddy bears here. 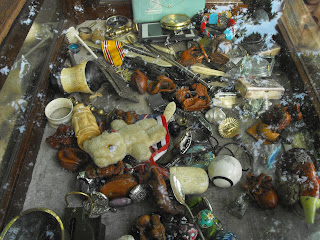 There were some very unusual bedfellows on this stall . . . 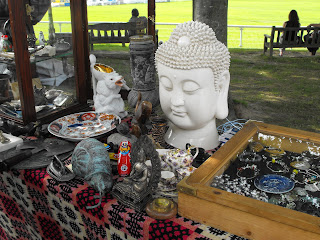 I'm really not sure if I could live with this poor little stuffed fawn on the sideboard back at home . . . 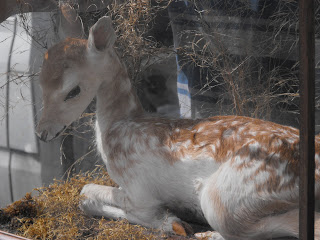 I think they must have eaten the rest of this chap as he ended by his fins! 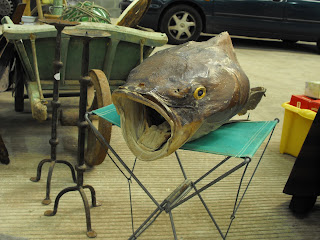 My OH examining one of the many guns on offer (all decomissioned of course). 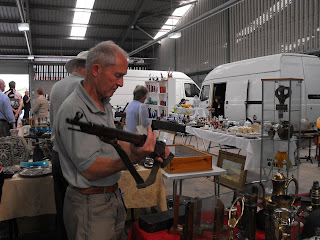 A collection of traps from the past. Gin traps were outlawed back in 1954, along with other leg hold traps. So much misery in one place . . . 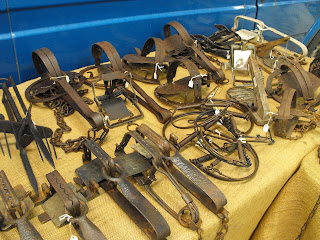 Poor old chap - I have never seen quite such a moth-eaten lion before. Quite how she lost her ears I don't know . . . I wonder if someone wanted an ear-less lion skin to put in front of the fire? 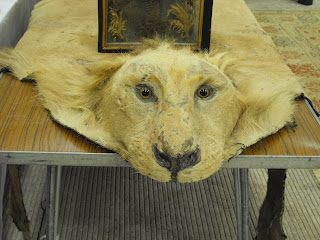 In one of the back sheds, this collection of vintage clothing was on offer . . . 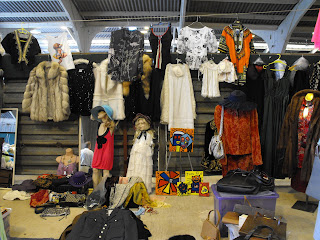 If you double click on this photograph you will read of the sad demise of a much-loved son, who drowned, age 8 years and 10 months . . . 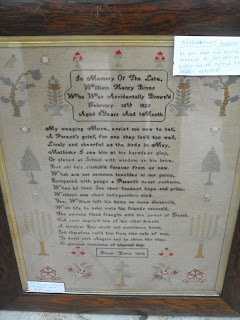 These little Christening gowns were a testament to the needle of many a mother and grandmother. The tiny little pintucks, and dainty stitching - what love went into their making. They remind me of Dorset auctions years ago, when such items could be bought for a pound or two. I was tempted then, but didn't indulge myself. Now I rather wish I had as they are becoming ever more collectable. 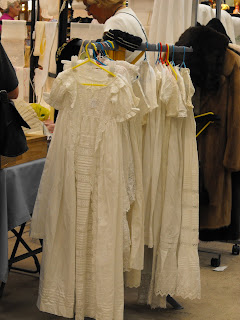 A few views from the balcony in one of the display halls. Here are always LOTS of stalls with jewellery, glass and ceramics. 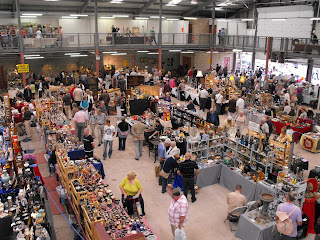 All sorts of gorgeous things on offer including vintage linen and lots of china and glass. 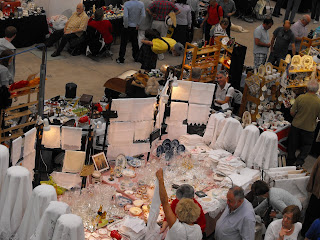 Some of the stalls have "room settings" with wall space for pictures and textiles to be hung, and some fascinating items of treen, furniture and ceramics. 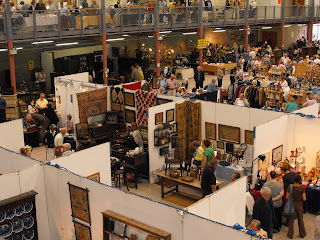