Help! I'm turning into my mother! 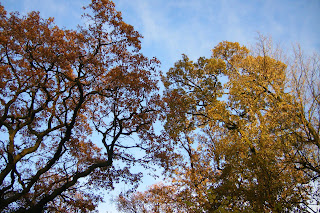 I think it is probably some time in your 50s when you realize you are radically changing from the wife and mother you were very comfortable as. To my horror, I am already the same SHAPE as my mother, and now I find I am starting to behave like her more and more!

When I am bored and waiting for something to load on this computer (which is very slow), I play a game of Spider Solitaire. Now, today, it suddenly occurred to me that mum used to play Solitaire all the time, with ordinary playing cards, at the dining table. When she finished one game she would start another. I am just the same! Sometimes she would play it clock fashion (is there a name for that?) but mostly in a line of 7 cards in a decreasing row.

I have started feeding some of the cats (who have special foibles) off the floor. Ban, for instance, is currently eating and sleeping on top of our tall larder fridge, so she eats very high up. Until recently she got fed on top of the cooker. She is a cat who keeps changing her sleeping/eating places every couple of weeks, so I indulge her. Lucy, who has one eye, is always wary of the other cats at mealtimes and so she gets fed on the dresser. Lucky, who is very elderly now, has her favourite food on demand. My offspring get cross and say ALL cats should be fed on the floor. This "pandering" is something my mum would have done as in later years, her pets always came first (in front of ME, that's for certain!)

Then last weekend I had a sudden yearning to do a big jigsaw. Typically, I had gotten rid of most of our jigsaw puzzles this summer, in the move to downsize. At a car boot sale, I noticed several stalls selling jigsaws, and for 50p I brought home a 1000 piece jigsaw of, predictably, a thatched cottage and lovely garden. Just the sort of picture my mum would have chosen, though she never did a puzzle bigger than 500 pieces. I have set it up on the table down in her flat, and as I was getting it started, I remembered my mum doing puzzles in the winter, carefully setting out the edge pieces and then turning all the middle pieces over so you could see the printed side, and going for something obviously coloured to start off with. It was strangely comforting to be history repeating itself . . .
Posted by Bovey Belle at 11:06