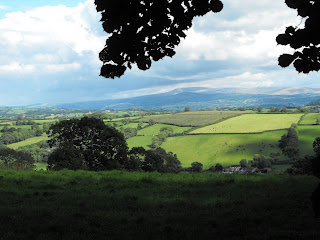 At 12.15 I padded downstairs, barefoot, thick dressing gown pulled tight around me and peered outside. The peering through the curtains in our bedroom, and then the half-landing showed a deep darkness that hid any possible silver grey car shape on the driveway. I opened the front door, and peered out. I still couldn't see a car, so in a scattering of kittens (who are now about 4 months old and well grown, and have taken to spending the night on my gardening kneeling mat on the porch), I padded, still barefoot, along the pathway until I could see that the drive was still empty. I went back to bed, and laid there for another 15 minutes, until my middle daughter arrived home from her bar job. I waited for sleep to reclaim me. It blardy-well DIDN'T. I got hotter and thirstier and gave up the unequal struggle, so here I am, a hunk of home-made bread in front of me and a half-empty glass of lager . . . well, the principle is it should help me relax and sleep.

I would love to read some more of a new-to-me-but-2nd-hand book that my daughter brought me back from Bristol: Journal of a Somerset Rector 1803 - 1834. He was John Skinner. Not a happy man - curmudgeonly even - but the poor chap had lost his darling wife, their dearest daughter (who was a chip off the old block) and various other close members of his family in fairly short order (several to TB) and his life was never really happy after that (not unsurprisingly). He lived in Camerton, a small mining village near Radstock in Somerset. He was an antiquary, like many of his ilk in that time, and never happier when holed-up in his study, proving to himself that he lived in Camulodunum - that wonderful spot where had once lived Caractacus, where Ostorius had settled a colony, and "where Arthur had fought the traitor Mordred" . . . he was positive that Camerton was none other than the Camulodunum of Tacitus, and he spent many many hours researching and "proving" this fact. He took himself to Stourhead, home of Sir Richard Hoare, and there holed up in HIS study, doing more research, though once another antiquary had the afront to state that Camulodunum was actually COLCHESTER! His jottings finally filled 98 volumes (!) of manuscripts, but sadly, at some point along the way, they ceased to be less about Camulodunum and more telling of the foibles of John Skinner . . . I cannot wait to read further . . .
Posted by Bovey Belle at 17:28