We had to travel up to Sheffield again this week to collect my daughter and her boyfriend and the 2nd half of their possessions. We had a moment of slight co-pilot error on the journey up. I had my eye a crossroads to low on the map, and sent my husband up a road which got narrower and narrower, until it became one of those lanes which you just KNOW is going to end in a farmyard! Here is where we turned around . . . 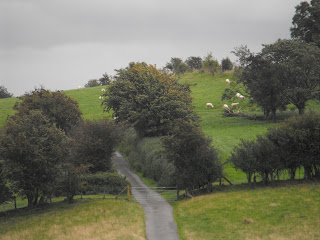 Well, we are home from our travels. Don't ask me how we crammed in what we managed to cram into our car, including 4 adults, but we did, and though it was front-end light for the first half of the journey, by the time we'd used up 1/4 tank of fuel it was a bit more grounded. We looked - perhaps for the last time for years - across the beautiful Peak District, me wishing we had time to stop so I could get my camera out, but it was buried "somewhere" in the back of the car, so that idea was abandoned. A shame, as the colours were so intense - purples, pinks, browns, startling greens where the sun broke through across the moors.

Downhill all the way - or so it felt. Dashing along the short stretches of motorway from Stafford to the Welsh borders, and then slowly along lanes, getting stuck behind trailers with a double-deck of sheep (the farmer gave them a good ride), looking at the beautiful scenery over the hedgerows where the bindweed flowers waved like white flags. The Welsh hills hugged us like a quilt, and it was a relief to be more than half-way home. The rain was with us all the way, but undaunted, the Swallows and Martins were diving headlong through it.

The fingers of autumn had tweaked the green from the leaves of many trees - Chestnuts first of course - but the Elders were a chorus of lilac-pink and fading cream, and the Hawthorns highlighted with skeins of scarlet. Locally we have few berries, stemming from the long dry spell for the first half of the year I think, following such a harsh winter.

The brackened hillsides were turning a muddy green and even the oak trees were starting to brown. Just past the Sugar Loaf, a murder of Crows were playing in the warm wet thermals, rising and falling like black confetti.

An Ash leaf twirled through the air. Autumn is here - and early this year. 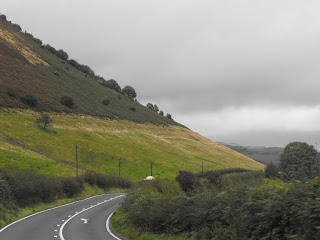 A road in mid-Wales, heading towards the Shropshire border. 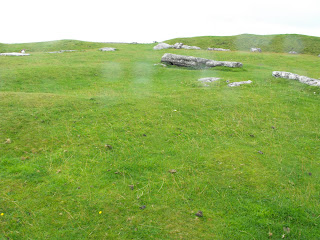 Arbor Low in the rain. I wanted to concentrate on pictures of the Cove in the centre of the henge this time. 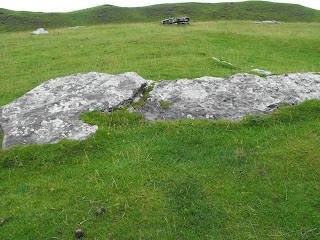 A shame all the stones are recumbent. It must have been quite impressive with them all standing to their full height. 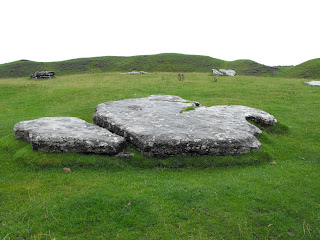 These stones were massive - I assume the two parts were once joined together. 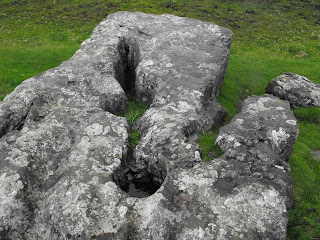 The rain over the millennia has made this wonderful keyhole shape in the limestone upright. 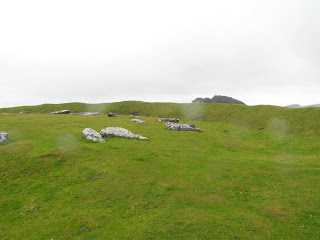 A view showing the height of the henge bank. 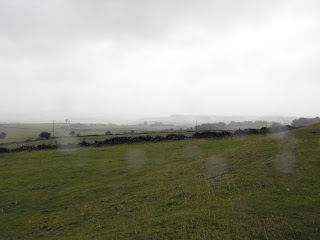 The NNW view was not QUITE so good in the rain!
Posted by Bovey Belle at 01:18