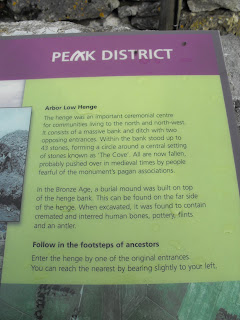 Whilst we were passing through Derbyshire last week, we stopped at Arbor Low, one of the most famous henge monuments and not for nothing known as "the Stonehenge of the North". Situated at over 1200 feet, it commands spectacular 360 degree views over the Derbyshire Peak District. The name Arbor Low derives from Old English: eordburgh-hlaw. The word Low is a familiar one throughout the Derbyshire region. Arbor Low dates from about 3,000 B.C. and tops a rich limestone plateau. Its earthen banks enclose a generous area roughly 171 feet by 131 feet, with two entrances. Contained within are more than 40 vast stones, recumbent now. Like Avebury, a small group of 3 stone pillars inside the stone circle are known as The Cove. Aubrey Burl (whose wonderful book Circles of Stone I am cribbing from to write this) mentions that the skeleton of a "stockily built man" was buried at the Eastern end of the Cove and nearby was a deep pit containing a single human arm bone, the relevance of which has sadly been lost over the millennia. 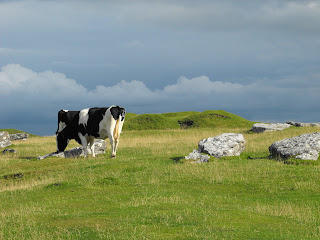 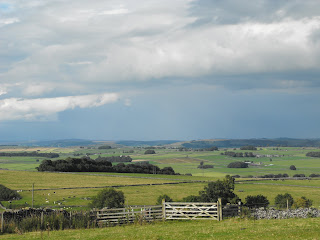 This view was looking NNW (I think!) 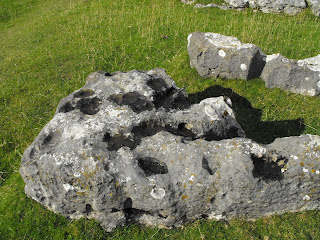 One of the much-weathered limestone uprights, now very much recumbent. 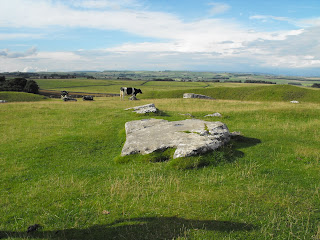 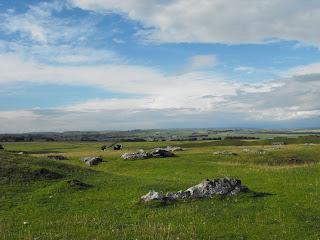 There is the suggestion of an avenue or processional way leading from the henge to the burial mound of Gib Hill some 330 yards West. It is thought that this long barrow was the original focus for the area. 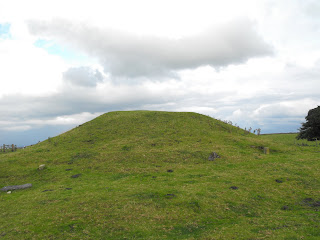 Burl states: " It has been claimed that no fewer than fifty straight ley-lines intersected at Arbor low. More persuasively it appears that this circle-henge was the sub-tribal focus of a well-populated countryside, usurping the roles of earlier family shrines. It lies at the heart of a landscape of eight Early Neolithic chambered tombs. In turn it became the centre of dozens of Bronze Age cairns. It is one of the wonders of Megalithic Britain."

In this instance, I would interpret ley-lines in Alfred Watkin's original polemic - e.g. that these were lines linking places in the landscape, and not energy lines - " A close examination of Watkins' leys reveals that he was perceiving a number of different kinds of alignment. A small number were simple alignments of prehistoric sites, but many were what we would now call "church lines" (a phenomenon fully accepted by German archaeologists), "corpse ways", "church paths" and "coffin lines" . It is clear from his writings that Watkins also included straight Native American paths or "roads" too.

The term "ley" is therefore a generic term for archaic linear features of all kinds. These lines appear in many different cultures and periods and manifest themselves in varying forms. Ultimately they and other linear features, lore and traditional concepts can be found to have a "spirit" element of some kind - often spirits of the dead. 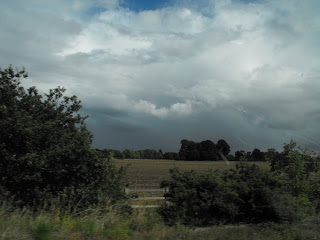 The weather in Staffordshire was equally threatening . . .
Posted by Bovey Belle at 09:48