Where we go a-viewing ourselves . . . just in case 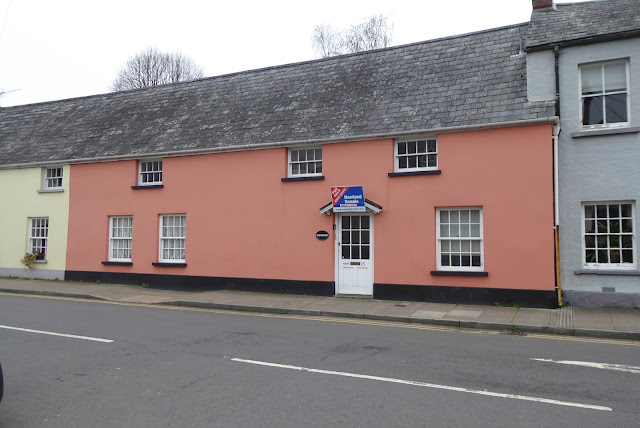 Just in case we get an offer - you never know, it has to happen SOME time, surely?  Anyway, after my dental checkup we trundled off to Usk in Monmouthshire.  We grabbed a bite to eat in Waitrose in Abergavenny and had a car picnic, and drove through what I have to say is fairly unremarkable countryside to arrive in good time at Usk (main road through closed due to roadworks) and found somewhere to park, before looking for the property.  The lights were on, so we assumed that the Estate Agent's lass was already there.  She was, and so were some decorators, painting all the walls white. 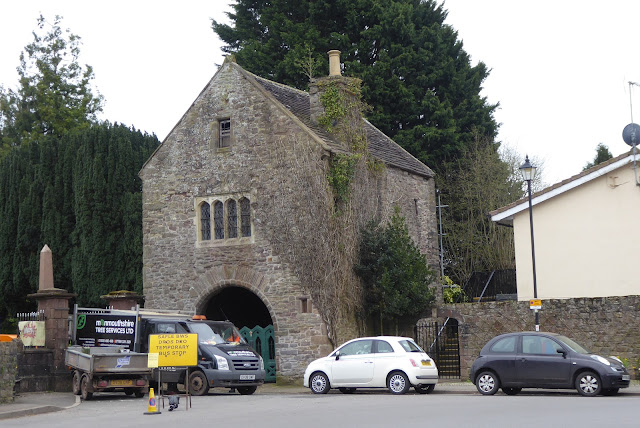 The gatehouse to the Church


This, on paper, seemed a sensible option for us.  Situated on a quiet street in a large village and so close to local amenities, with a big master bedroom over a big sitting room, options to reconfigure the kitchen and dining room.  However, whoever had partitioned up the house initially (it had formed part of an old school) had not thought it out well and we were at a loss, seeing it in the flesh so to speak, as to how we could make it work for us, as the wall we wanted to knock down was the only brick - supporting - one, and the rest were stud walls. 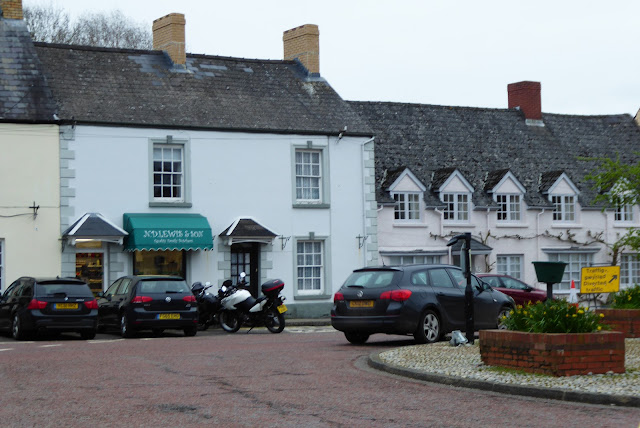 There was a yard at the back which I had kidded myself I could cope with (even if the cats couldn't) but it was dire, and the front of the property had big vertical cracks in the (concrete) render.  That would have to come off before you could even see if it was something structural or just leaking render.  (Which in old houses HAS to be lime render, to let them breath).  Since there was a goodly crack near a door jamb in some new plaster (wrong sort) in the sitting room, we were beginning to wonder if there was A Problem.  We felt the asking price was a very hopeful one too, but then perhaps for Usk it isn't (although this was on last year too).

You can look at the layout of a property on paper and it looks promising, but it isn't until you see it for yourself and imagine your furniture and belongings in it that you know whether it is right for you.  This place had absolutely ZERO atmosphere too.  You wouldn't know anyone had ever lived there.  Like walking into a garage.  A shame. 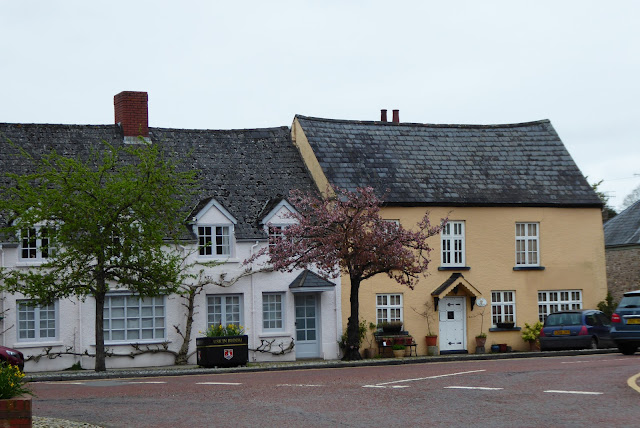 Walking round, we also got the feeling that Usk was turning into a dormitory town for folk from Newport.  There was a tiny corner shop near the house, lots of estate agents, a couple of chemists, and several "Nice" shops where you could buy interior decor of the expensive kind for your nice Usk cottage.  The only proper shop we saw was a butchers (two photos back).  Perhaps I am wrong and we missed the greengrocers, bakers, food shops etc, but they weren't in the main street. 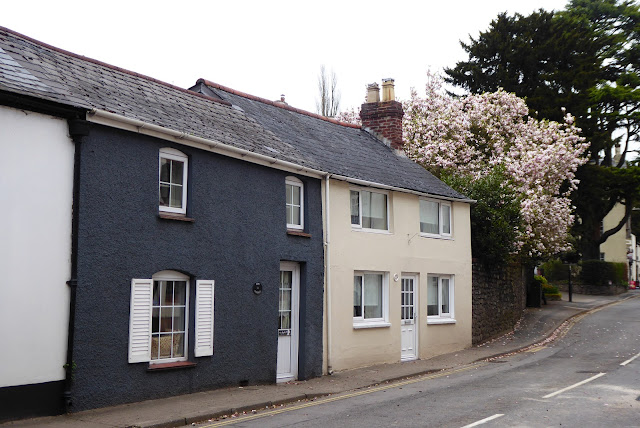 So, this cottage (and Usk) were not for us, though we enjoyed having a wander round.  We had only driven through it a couple of times, but found it very pretty and it is at the bottom edge of the area we want to relocate in (having drawn a rough diagram on the map). 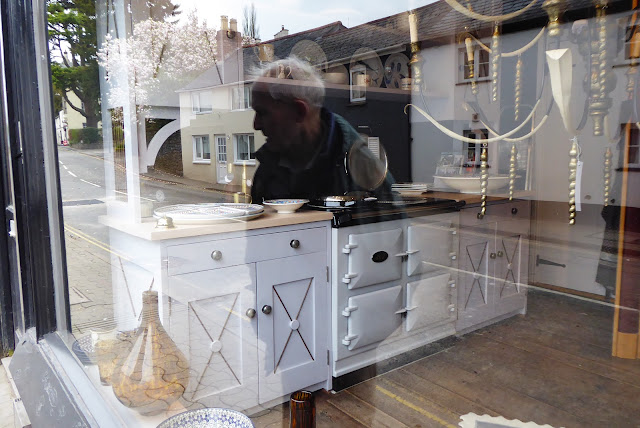 A "nice" kitchen shop - and my husband's reflection. 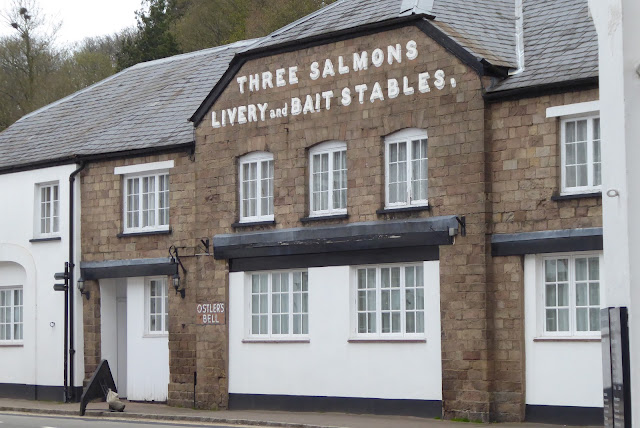 The old stables for the hotel opposite.  I loved the Ostler's Bell (never seen that before).  To the left you can just see the archway where the carriages would go in.  My husband queried the use of the word "Bait" - well it means to feed/eat.  Miners used to take their "bait" down the mines with them.  So horses could be left here for a few hours, fed, etc and then continue further on a journey.  Livery is for more permanent residence for a horse. 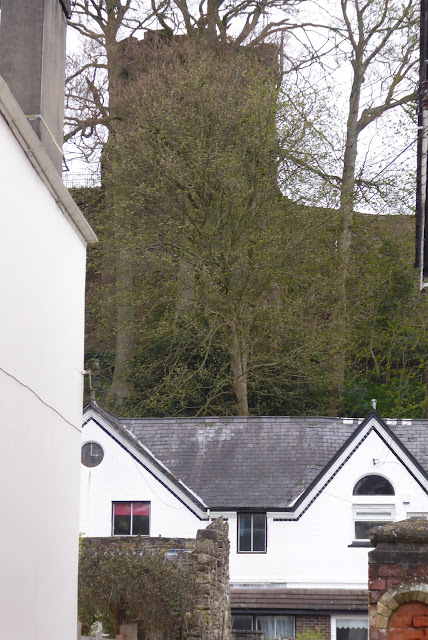 A glimpse of Usk castle between the houses.