Why We Moved to Wales Part II 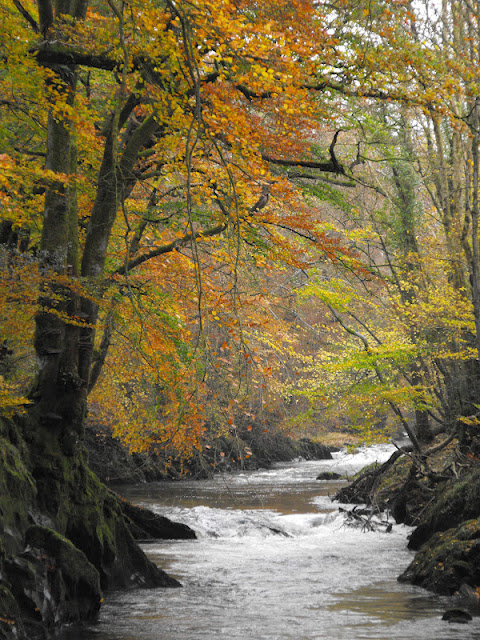 Our wild river valley in Autumn.

We really DID search all over for houses.  We viewed a lovely farmhouse in Altarnun, near Bodmin Moor in Cornwall.  There was a lovely level field with a stone wall on one side of it, and a big fireplace in the kitchen with a massive granite lintel over.  It was very promising, but there was a Radon Gas scare at the time and my husband wouldn't contemplate it once he knew there was granite in the fabric of the house (and probably underneath it too as bedrock).

We travelled up to the Lake District too, and viewed a lovely old house in a little hamlet just above Ullswater. There were only 3 or 4 houses there, and they were all cheek-by-jowl.  There was no land, and the garden was small and bisected by a footpath, but it had a lot of character and  we liked it well enough to offer on it.  There was a "sealed bid" situation and we missed it by £10,000 . . .  Another, near Appleby, was in  truly beautiful spot, with views across to the Fells, and a big barn, but it had been modernized beyond belief.  The vendors actually apologized for the one tiny bit of wood left in a wall beneath a window, saying that it was supporting the wall and they couldn't remove it!

We looked all along the Welsh marches too, booking several viewings in a day on our way from Dorset to see Granny C up in Manchester.  One half-timbered cottage just outside Ludlow looked lovely on paper.  We arrived there very late as we had underestimated the time it took to view and travel onwards in unknown territory.  It was TINY.  I think the agent must have written down the room sizes from memory as no way would we have gone to look if we'd known you couldn't even FIT a cat in a room, let alone swing one!    The garden was long and thin and overlooked by half a dozen other properties, so no privacy whatsoever.

Another I can actually remember the name of - it was the Bell House, Wooferton.  It had a lot of charm, but the land was very over-used from ponies and other livestock.  I think we did well to discard it, as looking at the map, it is very close to the A49.

So, we returned back to Dorset despondent.  There was nothing which really ticked the boxes in Devon - well, not in our price range anyway.  There were a few properties in Wales we liked the look of - especially the one in Carmarthenshire.  We made a few phone calls and set off one September day to Wales to view . . .

The first house couldn't have been more in the Welsh valleys if it had tried.  It was close to Llanhilleth, near Pontypool - and below Ebbw Vale.  I didn't know it at the time, but it was close to where my maternal grandfather had been a coal miner before the First World War.  His half-brother ("Uncle Will" to my mum) - his widowed mother had remarried - had moved to Aberbargoed and was a miner, with a wife and two daughters.

The coal mine on the opposite hillside to the house had closed and was going to be "landscaped" but it still looked bleak enough.  There was a steep and winding driveway to the house, which had once been the Mine Owner's, and it looked like it wouldn't be navigable if it was icy.

The house was close to a modern bungalow and the land that went with it was the far side of the bungalow and was rank grass and rushes - the sort that you get on acidic peat upland soils.  The fencing was sagging barbed wire.  The view from the field looked across to the steep terraced houses of Llanhilleth, which looked very alien to my Southern English eyes . . .  Which was a pity as the house inside had great possibilities, with good room sizes, an impressive staircase, and a huge Edwardian greenhouse at the back, though sadly-neglected over the years.

With the bridge over the Severn at our backs, we drove even deeper into Wales, excited at the prospect of the house which had leapt off the page at us, and the prospect of viewing a Welsh long house afterwards.  We had a gut feeling about the first property.  The directions were quite accurate, apart from the distance from the main road to the turning we needed.  We dropped down a little hill and the magic of the river valley took our breath away.  Even though it was raining, the view on the bend looking up the river valley was stunning.  We drove on, past a little mill on the river bank, then across a narrow iron bridge which looked like the Army had built it during the war and never come back from it.  We followed the lane up a steep zig-zag hill and there it was, gleaming white despite the rain as it had just been newly-whitewashed to impress buyers (hum - waste of time!) and with the paintwork in a chocolate brown which had also been used down at the Mill.  There must have been a job lot doing the rounds . . .

Labels: Part II, Why We Moved to Wales