A stroll around Kington Museum 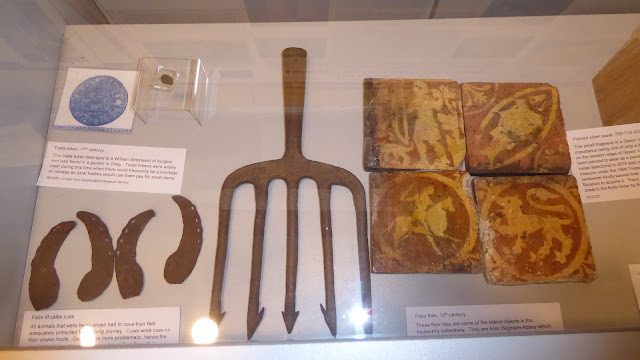 We had an outing yesterday to Kington.  There was a monthly market on which we wanted to check out.  No sooner had we reached the Museum, than Keith decided he would walk around it. The man outside selling books was also a Museum volunteer, and told us lots about the exhibits. The elephant bones below came from a 47 year old circus elephant who had decided that Kington was the place to bid farewell to the world (as indeed, one also did in Carmarthen where it is buried in the grounds of the old Grammar School).  There was a photo of a younger elephant who used to wander around the town on its own, and gratefully accepted pints of beer or cider from customers at the pub! 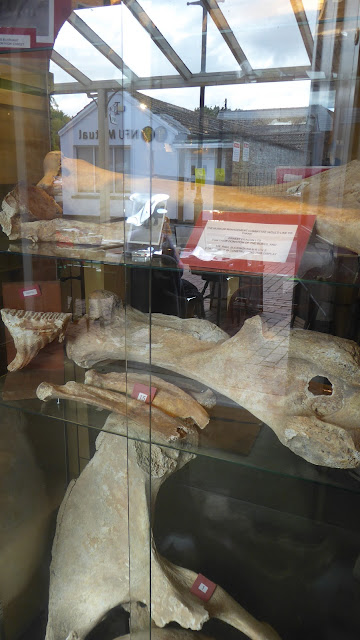 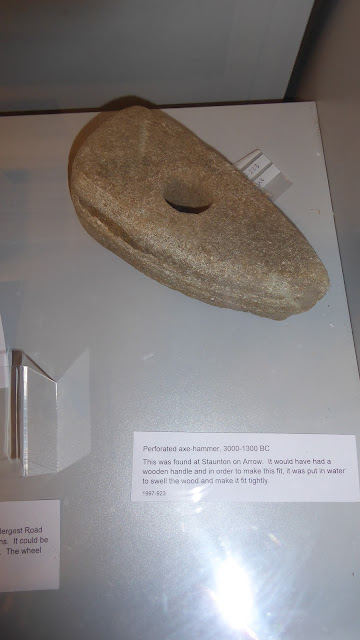 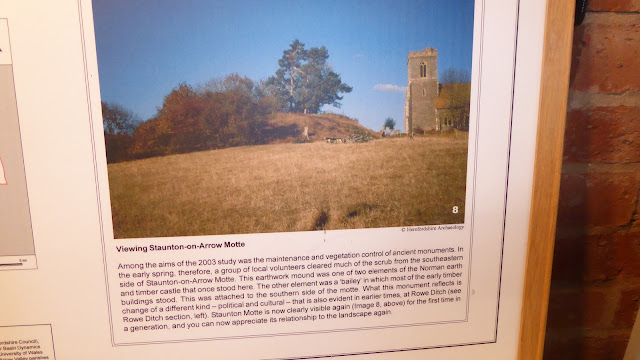 On my list to visit - Staunton-on-Arrow church and the motte next to it. Perhaps not till early spring as I imagine it's rather overgrown now, as the notes below the picture suggest. 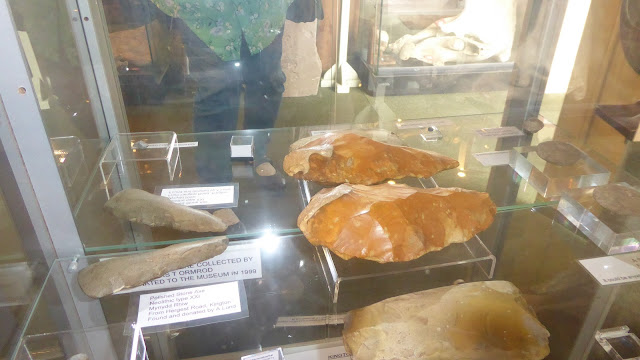 Neolithic stone axes found in the vicinity of Kington. 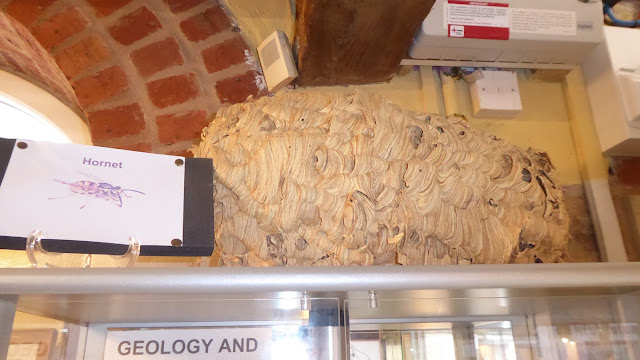 A Hornet's nest.  Looks about 3 times the size of the Wasp nest we had here last year. 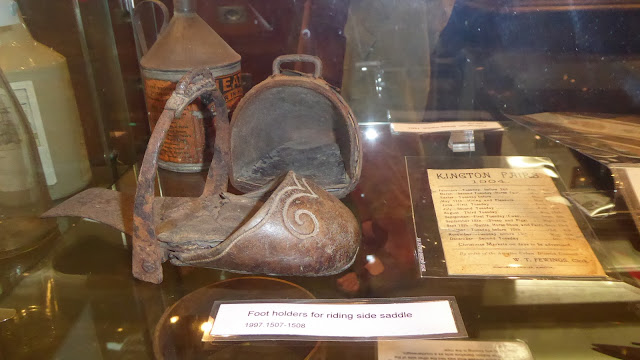 A couple of slipper-stirrups. (I will forgive them the term "foot holders" as they are obviously not horsey !) 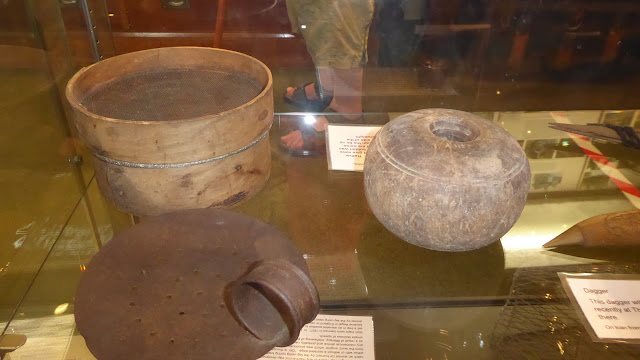 Front left -skimmer for cream, and in the middle, a log headcollar block for when a horse was tied up in a stall - the rope went from the headcollar, through a ring on the manger, and then threaded through the block.  So the horse could move his head etc whilst still fastened. 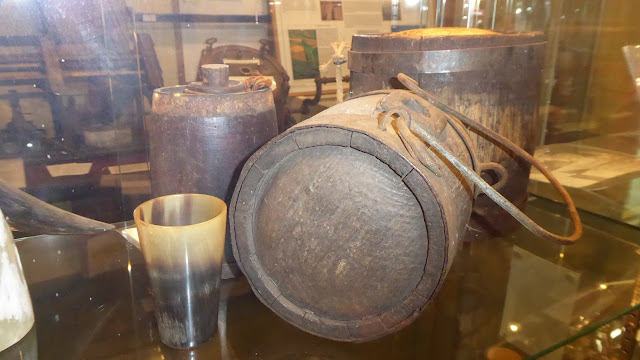 A horn drinking cup and a selection of old costrels.  The one in the front is like the cart costrel I have in my collection. 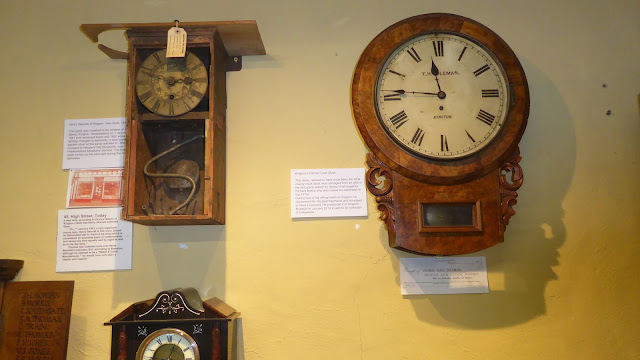 Kingston was once a centre for clock making. At one time, we were told, there were about 40 clock makers working in the town. 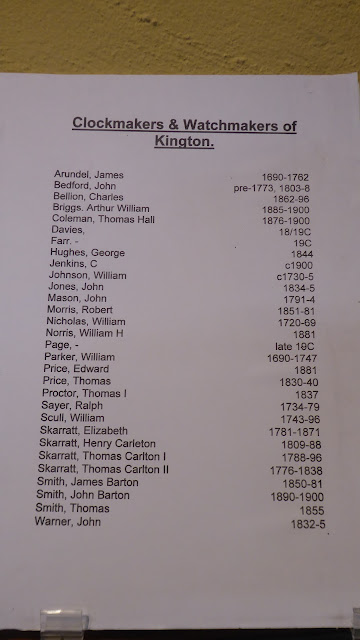 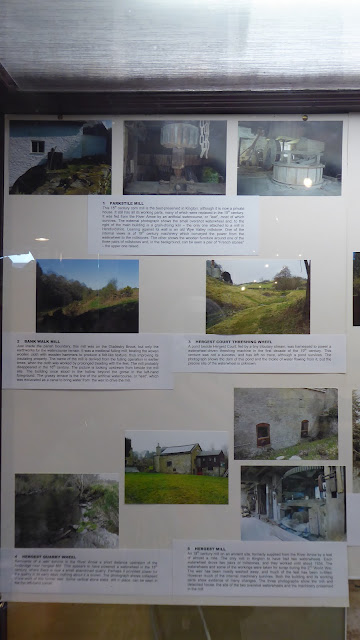 Sorry, reading this will be impossible, but it was one of several sheets of photographs showing the Mills of Kington. 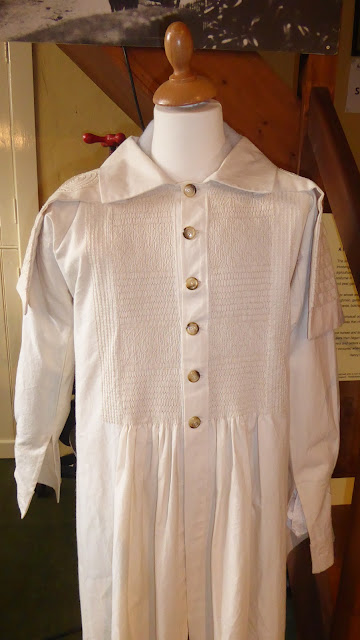 I have always been interested in smocks - this was beautifully made and embroidered.  All the details of the extended family are below, and make fascinating reading. 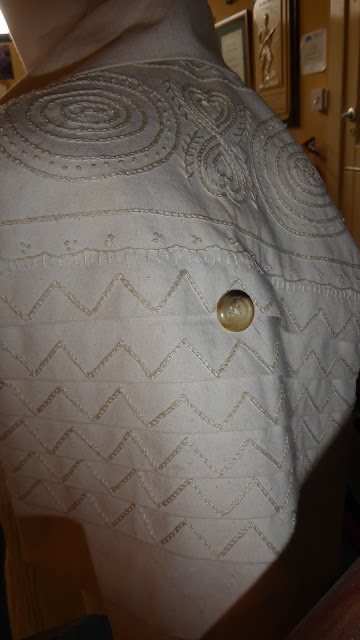 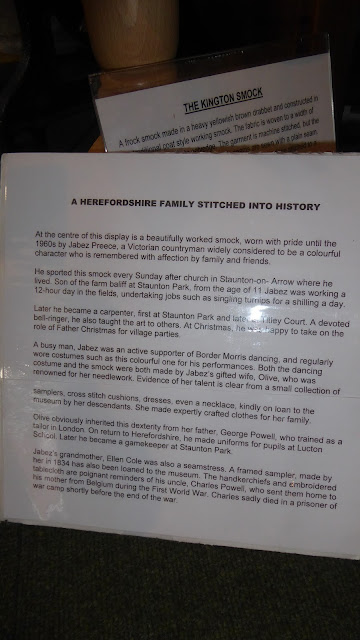 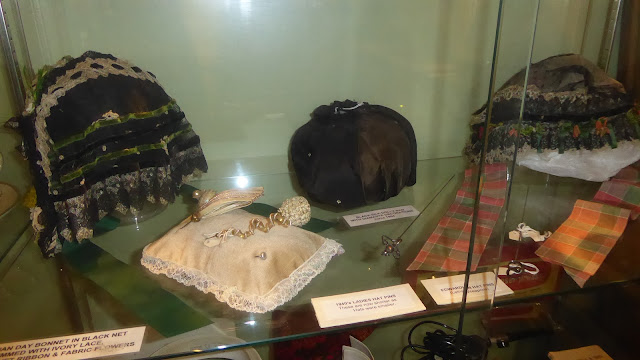 There was a good display of Victorian and Edwardian clothing too. 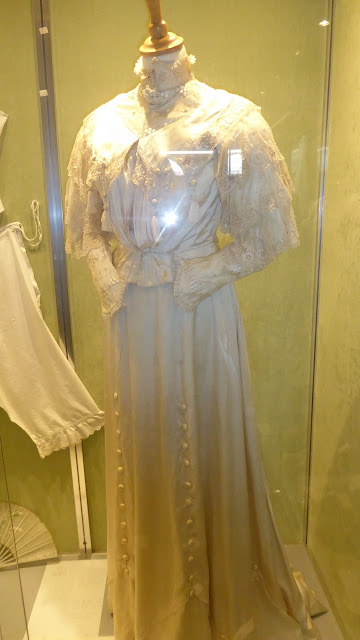 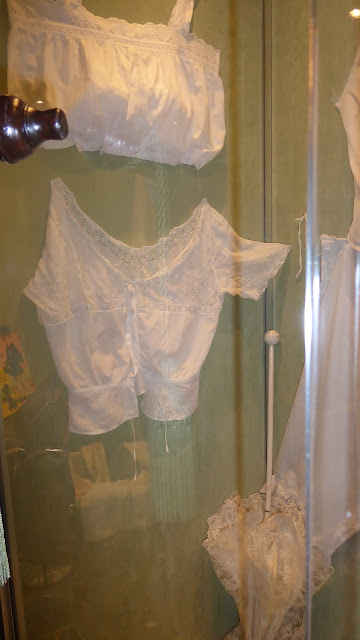 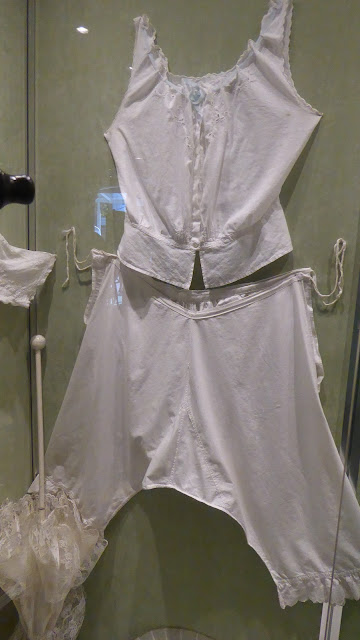 The back rooms had a good display of Military things and the volunteer and Keith had a lovely chat.  I didn't know there had been two big US Military Hospitals there, which started with soldiers injured at Dunkirk, offering treatment, rest and recuperation and continued throughout the war.  I think I recall they were used for temporary accommodation for local folk after the war too.  Now that site is covered by Industrial units. 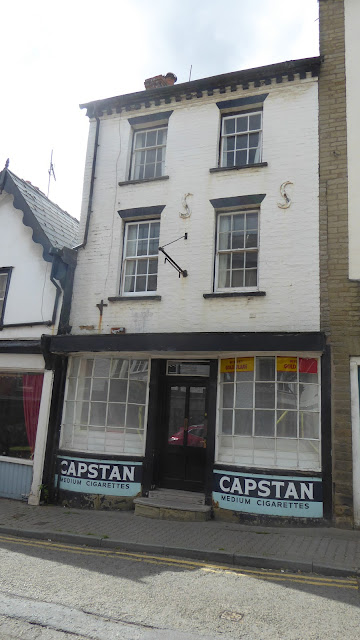 I pushed Keith along the somewhat challenging pavements to the Charity Shops, and he then upped and walked across the road and back up the slight hill for a few hundred yards.  I was very surprised that a) he chose to do it and b) he managed very well.  The pavement there is stone setts and rather uneven (not easy for wheelchair pushing!) The last few times we've been out in the park, his neck has seized up the moment he begins walking, but didn't yesterday.  Hurray!  I pushed him the last bit and we walked past someone eating chips. That was FATAL, I just HAD to have some so went in search of the chippy, which was down the street and around the corner.  A reminder of the past with the Capstan cigarettes advertising signs.  Bet they'd be worth something nowadays as in very good condition.
Anyway, chips were bought and eaten, though slightly surprised at price - £3.50!!!  I can remember when they were 6d and a piece of Cod was 9d.  A big bottle of Corona pop was a shilling, but you got thruppence back on the bottle.  I am definitely getting old!  Must still be looking younger though (I am very fortunate with my complexion and not too many wrinkles yet) as yesterday I was taken for Keith's daughter!
It was a lovely few hours out and so good to see Keith more mobile.  The pills must finally be working!
We stopped at the church at Old Radnor on the way back, and it was well worth visiting.  There will be a post in due course.
Oh, and by way of a P.S.  The best thing by far on tv this week was British Comedy Greats about 'Allo 'Allo (the one about Les Dawson recently was also brilliant). Oh, it cheered us up no end.  We loved it when it was first shown, though I remember trying to explain it to the children and failing miserably.  British Farce at its best.