The countryside's the colour of Weetabix 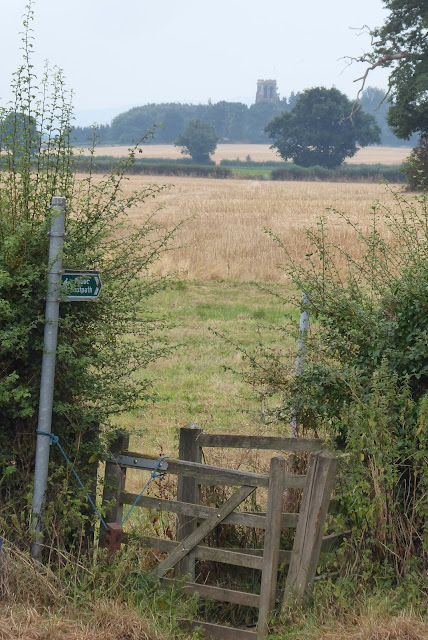 We went to Hereford yesterday, to check out Wheelchairs at the Mobility Centre, and bought one which will do grass and gravel (it has Mountain Bike tyres and cost an arm and a leg), but need to go back tomorrow to collect it as it had to be ordered.  We couldn't help noticing how brown and sere it was everywhere - the hot weather has really scorched everything growing.

We will have an early autumn - there were drifts of yellow Birch leaves along the roadside and entire golden trees amongst the struggling woodland.  Beeches are turning already, Sycamores dropping leaves and everywhere SO thirsty.  There was some rain on the journey, but not much.  It had passed us by, bar a few drops first thing, but yesterday evening we had a little thunder and then steady rain which the garden greedily absorbed. I should think if I put a spade in later it wouldn't be more than skin-deep dampness though.

I had intended to go to M&S for a couple of things I needed, and to Doughty's as they have 10% off fabrics at the moment,  but we were late leaving, then got held up in a long line of traffic on the A438, so I did a 3 point turn and headed up the Bredwardine turning and we came in Madley way. When I mentioned getting lunch, Keith realized he'd left his tablets behind and so plans to go shopping were swiftly abandoned (I seem fated not to get a leisurely browse at Doughty's), although I did listen to the siren call of the brown "Eaton Bishop Church" sign I'd noticed on the way in and stopped for a swift round of photos.  Apologies for another church quite so soon (and there should be Pilleth next but I will put that on hold) but this one is worth it for the Medieval stained glass. 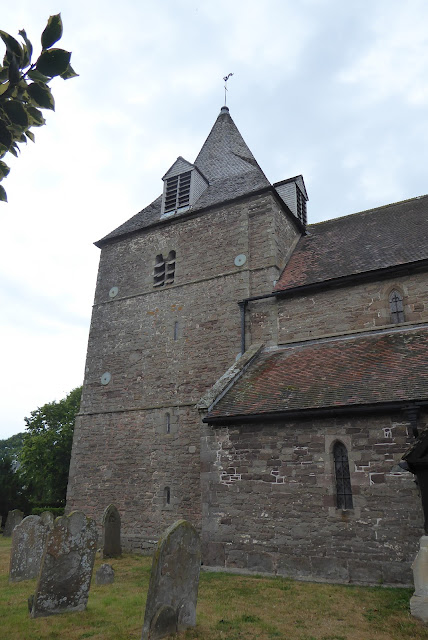 Eaton Bishop Church near Hereford, dedicated to St Michael and All Angels.  Pevsner described it as having a Norman W tower with twin bell openings and a later broach spire of "friendly shape". HERE is a video of the church and village which also gives archaeological details. 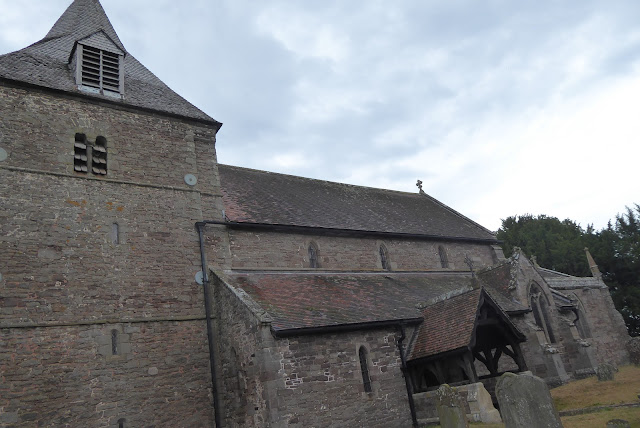 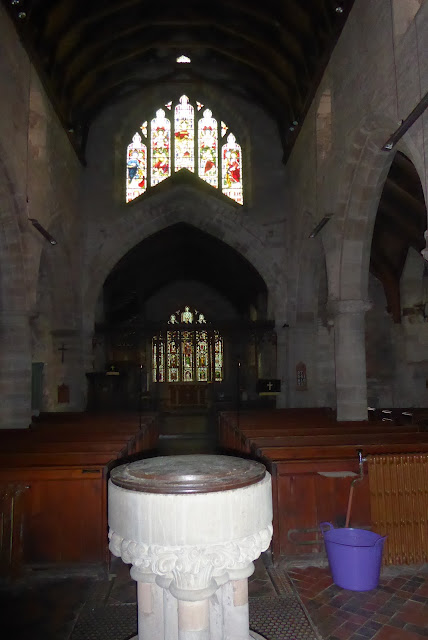 There was a somewhat heavy-handed restoration in 1885 which removed earlier detail.  The font, however, dates from the 13th C. I don't know how I missed seeing that bucket! 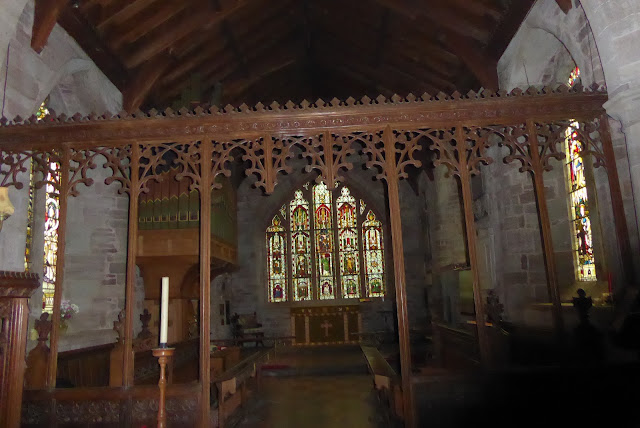 Presumably1887 also, but pleasing Gothic Revival carvings to the Pulpit and as Pevsner doesn't mention the Rood Screen, it is probably the same date. 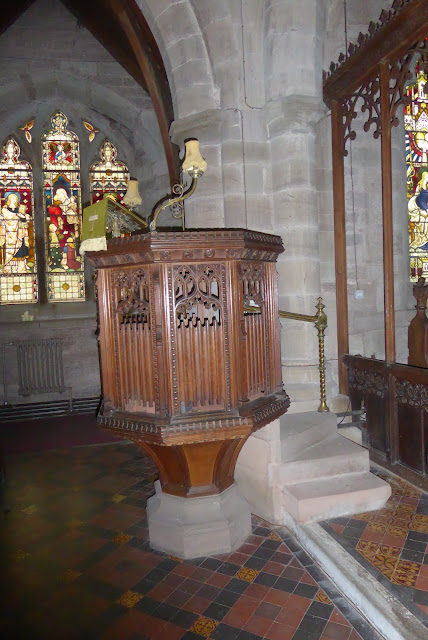 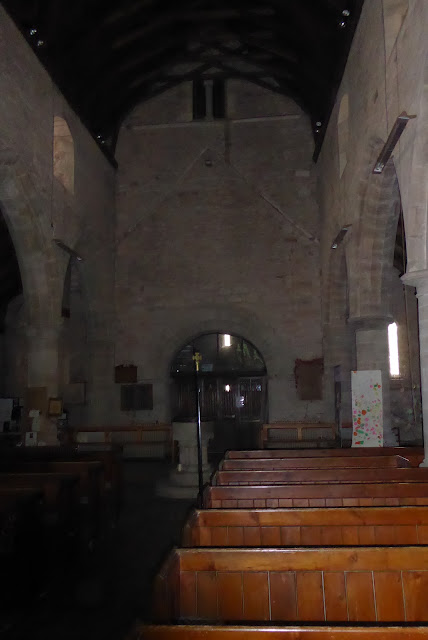 Looking back, you can clearly see the earlier Norman roof line. 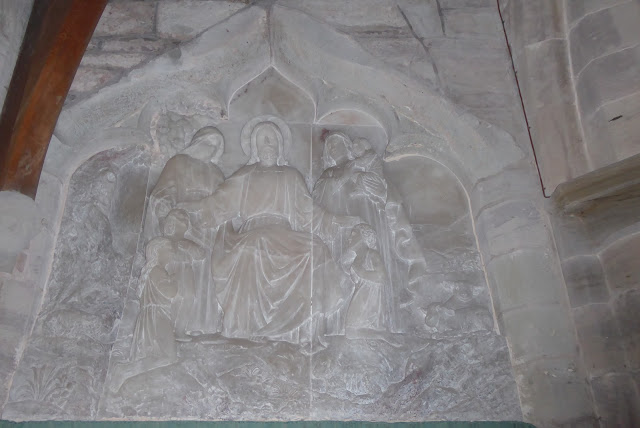 A splendid marble edifice in memory of Lady Irva Keenan Pulley and her husband. 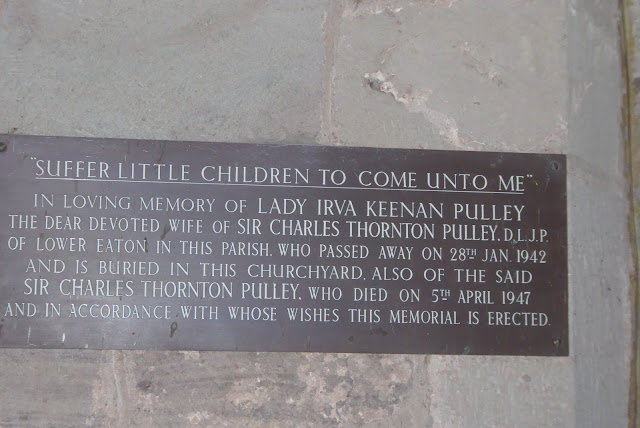 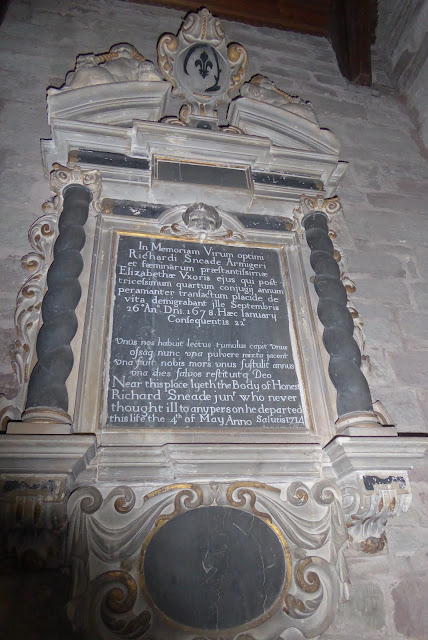 The other splendid memorial, which is to the Sneade family.  Pevsner called the putti "ugly"! 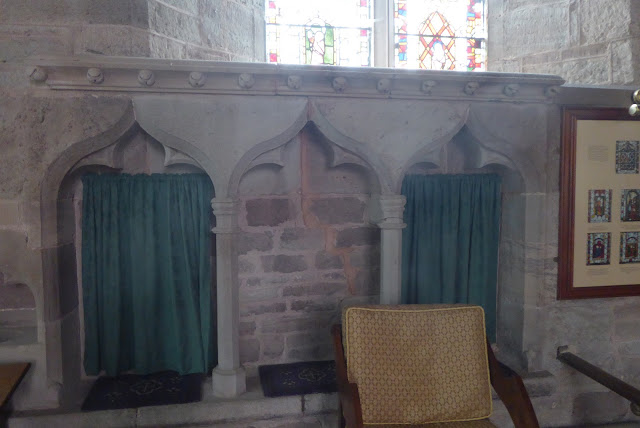 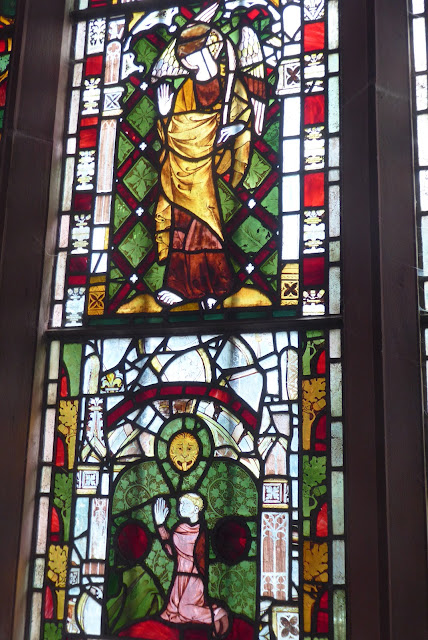 Now for the 14th C stained glass windows.  As you can see, they didn't survive completely intact and broken pieces have been incorporated in the border and plain glass in places. Very little blue was used - the palate was brown, green and yellow.  Pevsner speaks of "the sophisticated, highly emotional draughtsmanship" used in the windows, "similar to Illuminated Manuscsripts".  Probably made in France, but assembled locally. 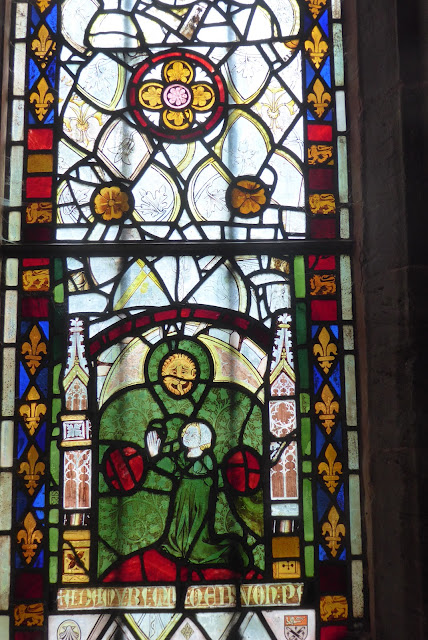 I am not sure if the lion's head is representative of St Mark. 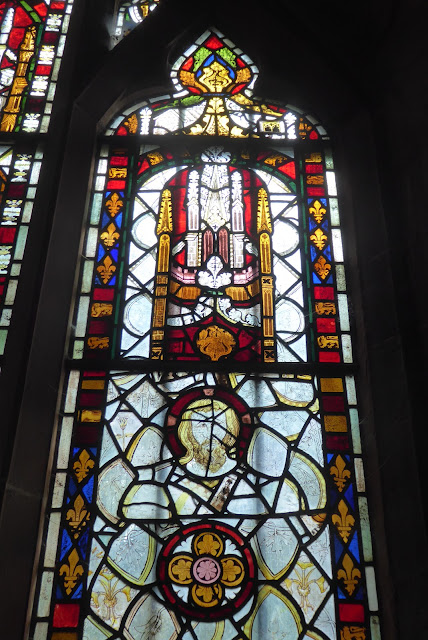 This depicts the head of Christ. 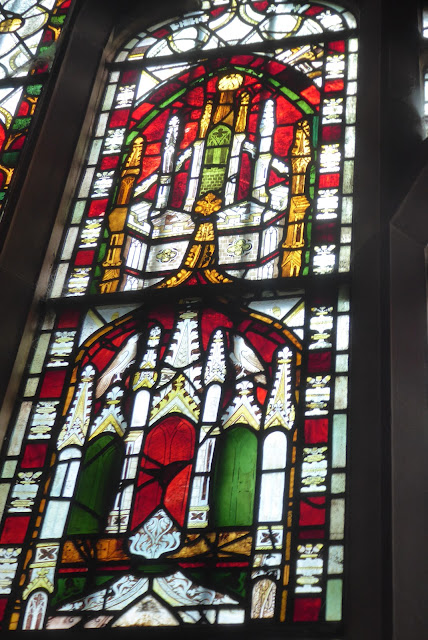 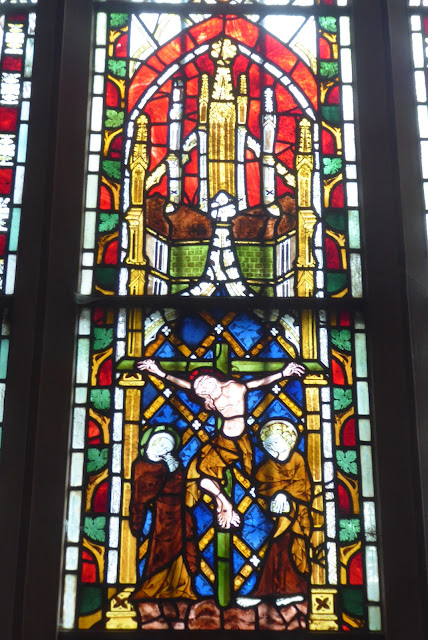 Christ on the Cross. 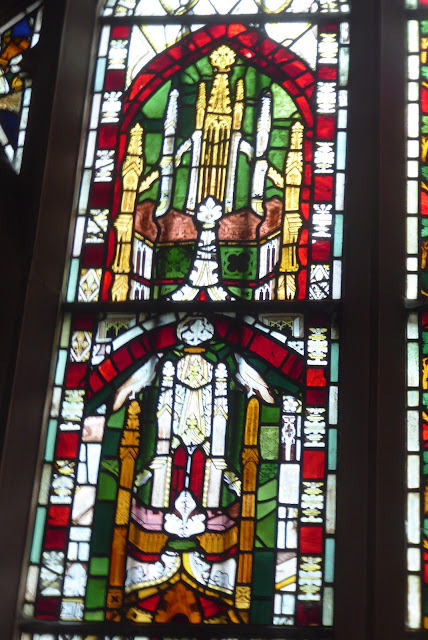 The photos of the lower levels suffered from poor light - must go back and try again.  If I have Keith with me, I am always in a hurry to get back to the car.

This morning I am struggling to stay awake.  I unwittingly inhaled a lot of fine straw dust by driving along with the windows open yesterday. I have been awake, not able to breath well, all night and have had to take one of my extra-strong anti-histamines this morning, which has finally helped.

Glad that it is so much cooler now and we have had some rain, with more forecast.  Hope things are more comfortable where you are too, for my UK followers.