Not mentioned anywhere, this stump of an earlier preaching cross (I assume) could well date back to the 9th C Saxon origins of the original church on this site. 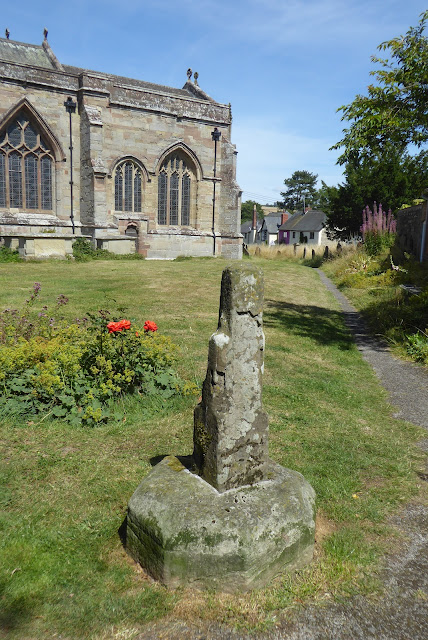 Pevsner declares that St Andrew's Church at Presteigne is "architecturally much the best in Radnorshire", its wealth having largely come from the Herefordshire part of the parish (it is right on the border and indeed still in the diocese of Hereford.)  Hah! - you can tell the dividing line when the car feels as if it has square wheels and no suspension the moment you cross into Herefordshire!! Having a scanty population, they do not have much money to throw at road repairs . . . 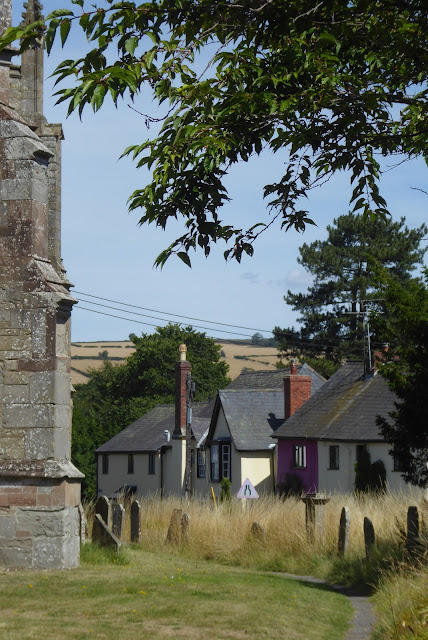 I loved this "place in the landscape" type of photo showing some of the lovely old buildings lining Broad Street as it drops towards the bridge over the River Lugg. 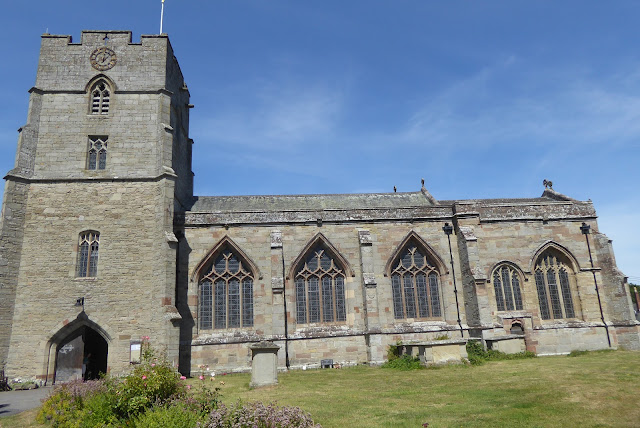 The Church was held by the Augustinian Canons of Wigmore from the 13th C until the Reformation. The early roots are well hidden on the exterior in this view. 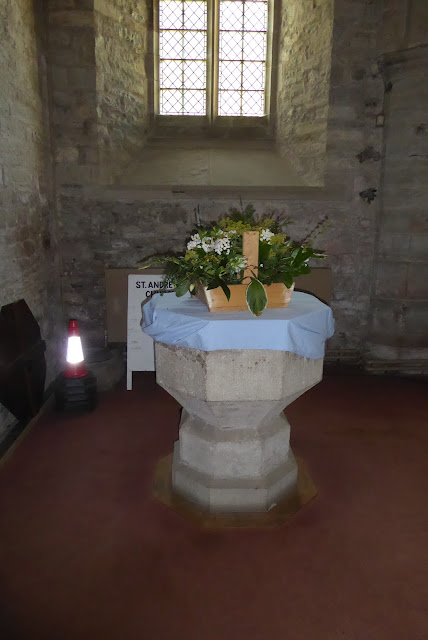 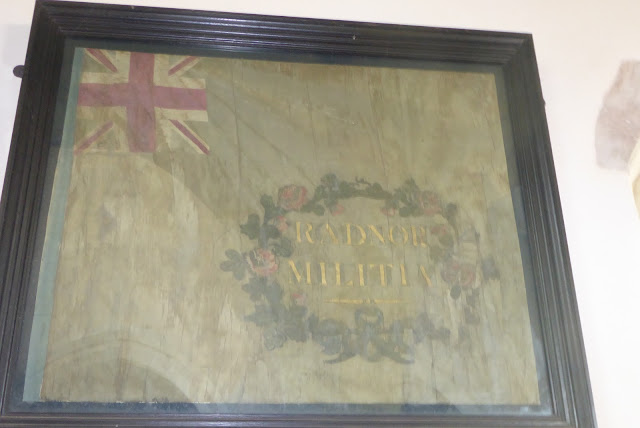 If you are a military person, these recently carefully-conserved banners would be the highlight of your visit.  I was certainly drawn to them (ahem, so much so that I totally ignored the amazing Flanders tapestry dating to 1510 and showing Christ's entry into Jerusalem.  See link for photo.  In my defence, I find faded tapestries a tad . . . boring.)  Anyway, the one above shows the historic banner of the Radnorshire Militia, which dates from the Napoleonic Wars.  I find this more amazing - it has survived a war AND 200 years since.  The silk colours would have originally been blue. 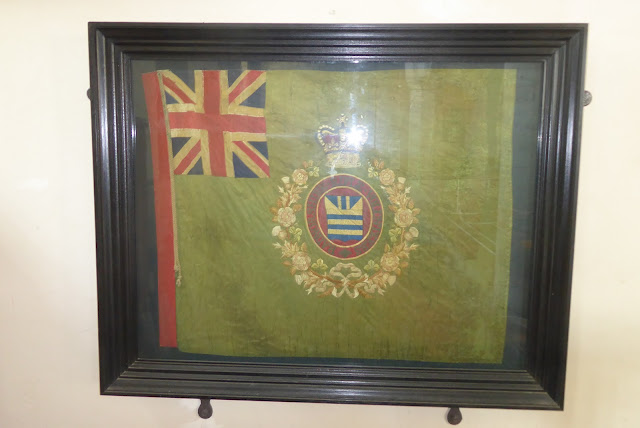 Here is the banner of the long-extinct Radnorshire Rifle Volunteers, which was formed in 1860 and this banner was given to them in 1861 by Lady Walsh.  The central coat of arms is the unofficial one of Presteigne - the shield of the Mortimers. 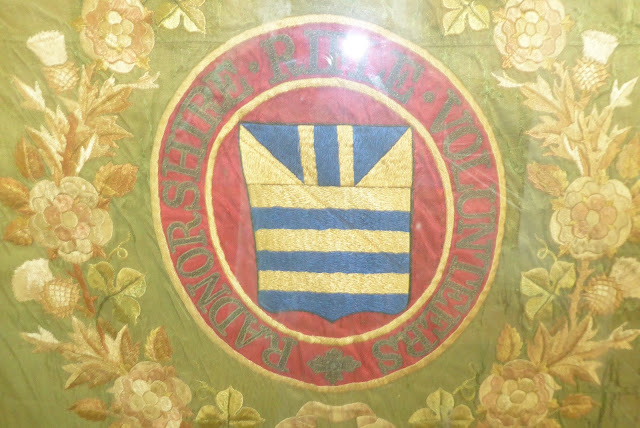 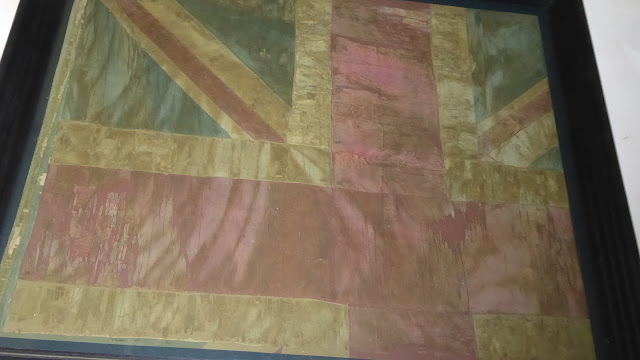 I assume this section of the Union Jack flag was also from Napoleonic times. 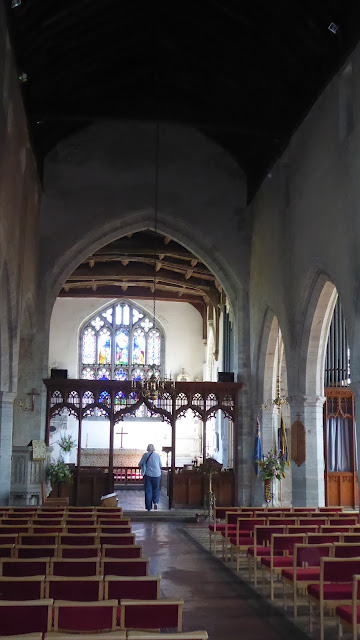 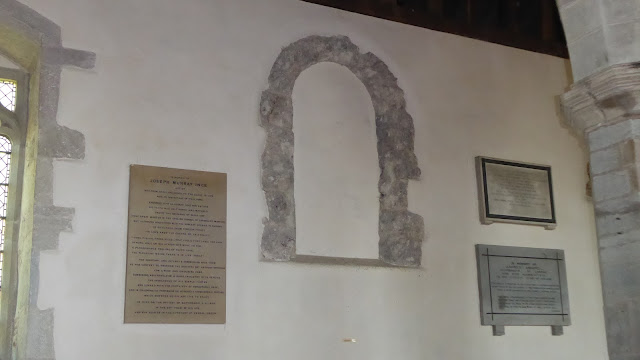 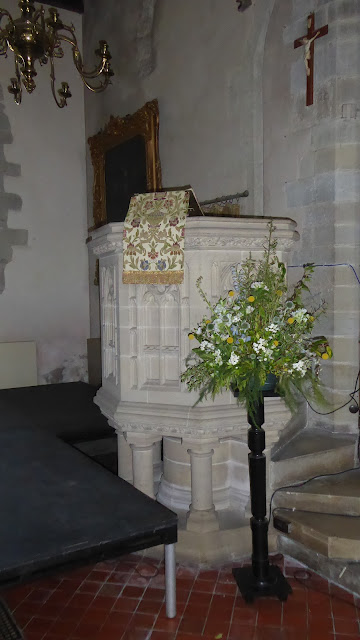 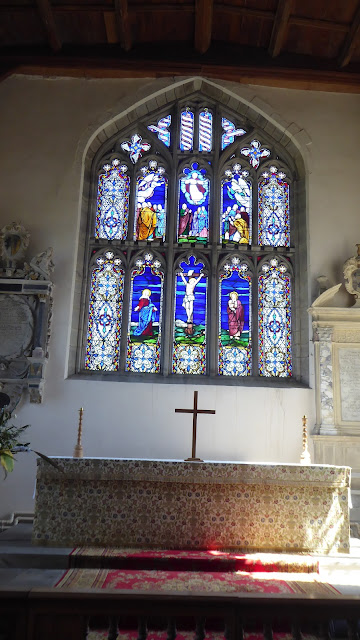 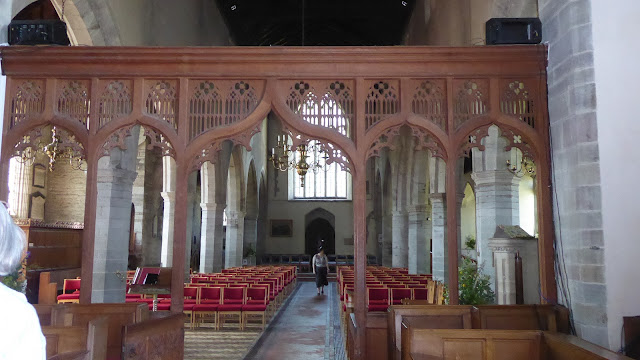 An attractive rood screen (Pearson restoration detail?) and below, many memorials to the great and good of the parish. 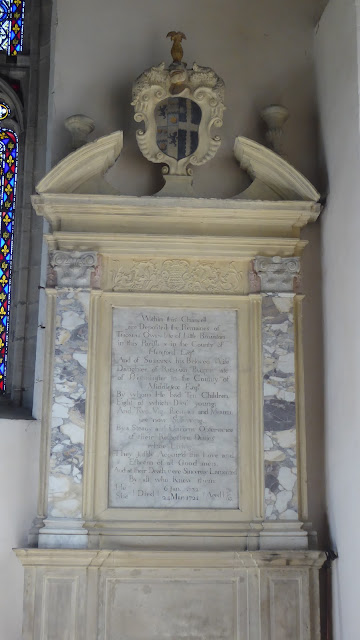 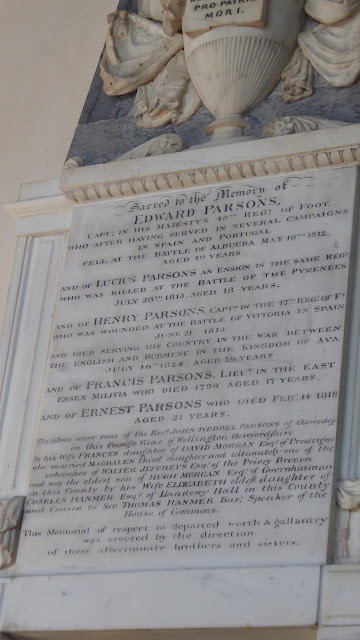 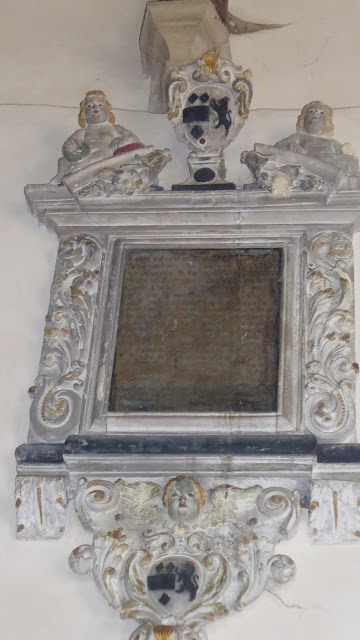 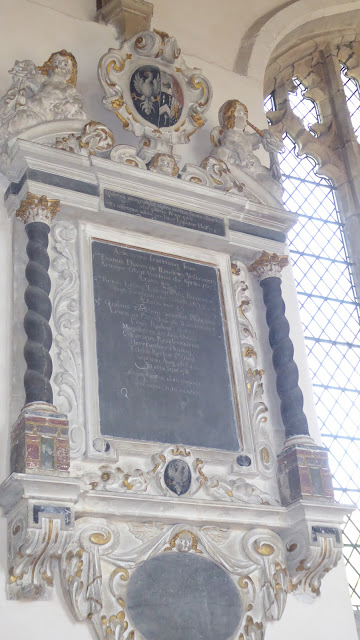 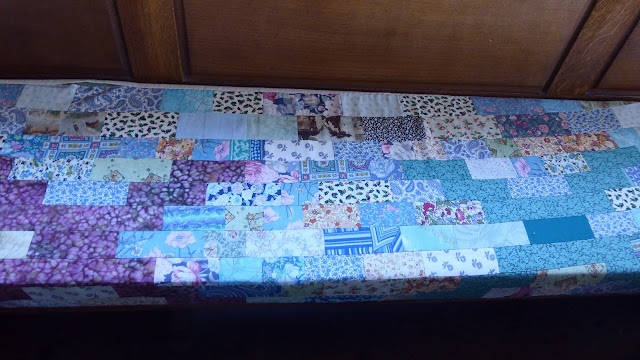 The unsung heroines of any church were responsible for making pretty patchwork seat covers throughout. 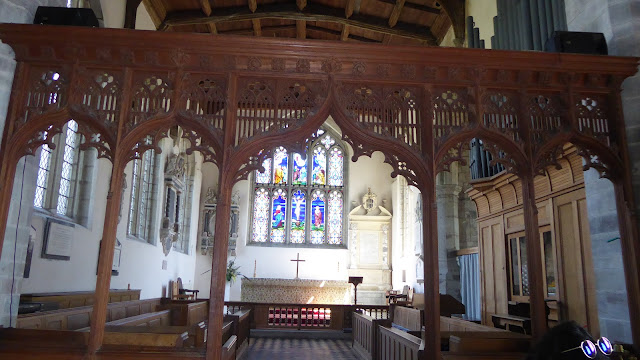 A glimpse of the chancel roof which dates back to Tudor times.  Pevsner mentions early C14 stonework around the chancel arch and it was recorded as painted with figures of Moses and Aaron on the W side and Death and Time on the E. If fragments remain, I didn't notice them.  The Chancel is "fully developed Perp" (easy to tell when I am quoting Pevsner!) It is Grade 1 listed. The church was skillfully restored and altered by Gilbert-Scott back in the 1860s. 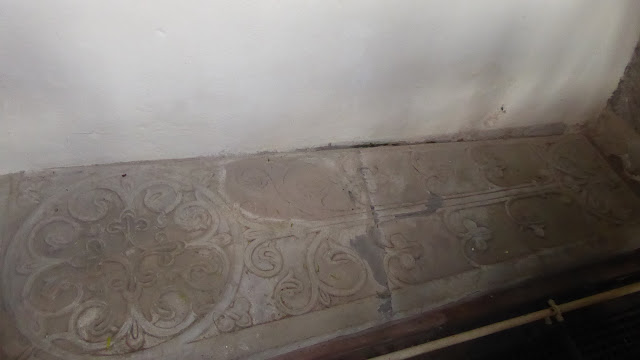 Finally, a 13th C coffin lid, possibly for a member of the Mortimer family, lies in a recess. 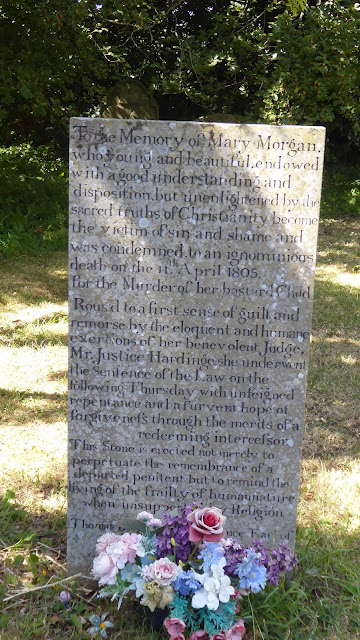 This poor girl, Mary Morgan - taken advantage of and who, in a state of complete desperation murdered her illegitimate baby, paid the ultimate price for it, being the last woman to be hung in Presteigne.  She was only 17.
My holiday is over now as my friend Gay returned home yesterday.  Lots more posts to come from our outings.
Keith saw the Physio last week and has some neck exercises to do, which really seem to help - after doing them he can stand up straight away from the chair -but sadly when we tried a walk yesterday his neck once again prevented him from walking easily and we had to do just a few yards and return to the car.  He is fine in the house, so he is thinking it is an almost psychological thing that stops him walking in the park. We are going to see about a wheelchair on Monday, so we can get out and about whilst waiting to hear that OT have finally recommended the mobility scooter he needs. Hoping it will be soon as two big Fairs coming up and Keith would love to go to them
Update: goodness it's hot out there already.  We have just sold our old chest freezer to some farmers from Rhayader way so that gives me some housekeeping for this week.  I think the afternoon will be spent doing more family history after I have had a breakthrough for my dad's deepest of Devon (Dartmoor fringe) roots.  Yesterday I found the house where our folk lived - my dream thatched and cob Devon farmhouse . . .  Wish THAT had stayed in our branch of the family, but sadly ours became Ag. Labs. rather than Yeomen.
Posted by Bovey Belle at 01:45