The Judge's Lodging, Presteigne and the Kilvert connection

The car boot sale yesterday was held in the grounds of Baskerville Hall at Clyro (which Kilvert would have known well).  Our first walk along the one row of sellers didn't look very hopeful, but I bought a modern horse painting made to look as if it were 200 years old. On the way back, more stuff had been put out and I found several items including some French enamel ware, a lovely little straw-work box and a big heavy clear glass vase for flowers which daughter Gabby was looking for. Worth getting up early for. 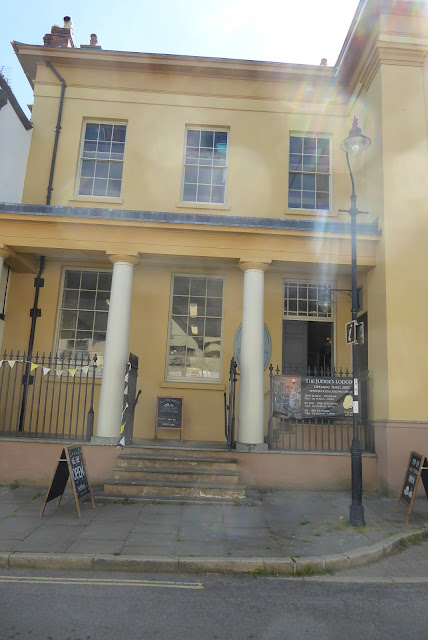 Yesterday Tam, Gay and I went to Presteigne yesterday to visit the Judge's Lodgings, which is a museum I had intended to visit for a long time, but just a bit too far from Carms.  Here it's only 20 miles away.   The building is painted in the original yellow colourway that they discovered during renovations. 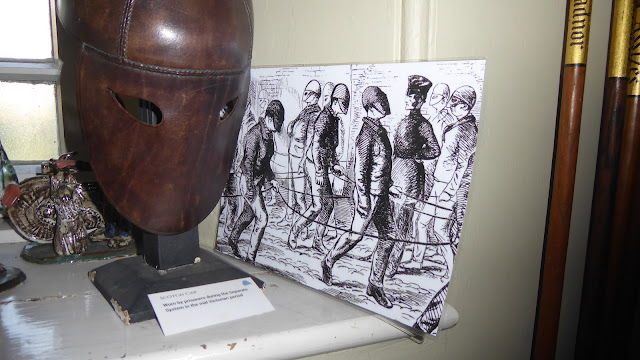 The building is a combination of the grand accommodation for the circuit judges and the Court they worked in, and a good exhibition downstairs about the Radnorshire Constabulary.  This leather Scotch cap was worn by prisoners during the Separate System in mid-Victorian times. 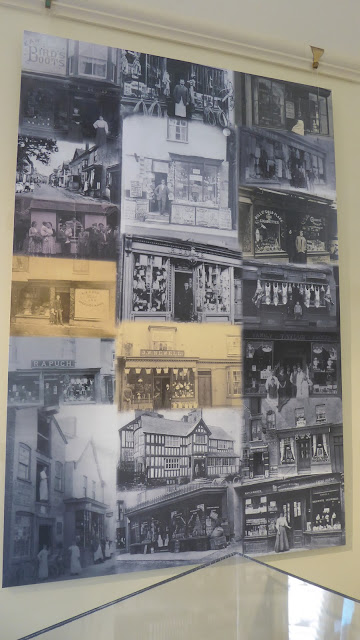 There were a good selection of photographs of shops in the town in former times - this was one of sevefral compilations. 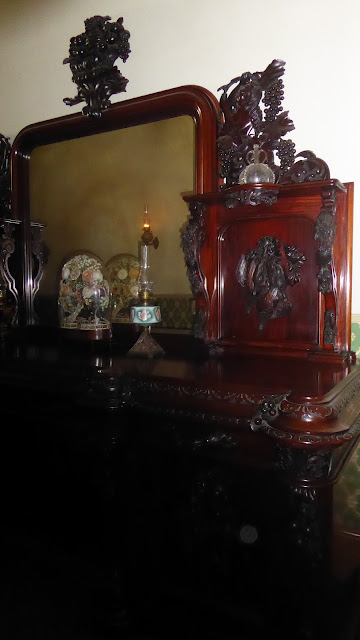 In the hallway was this enormous and very grand heavily-carved mahogany Victorian sideboard.  I would lay money on it that this piece hasn't moved since it was put in place! 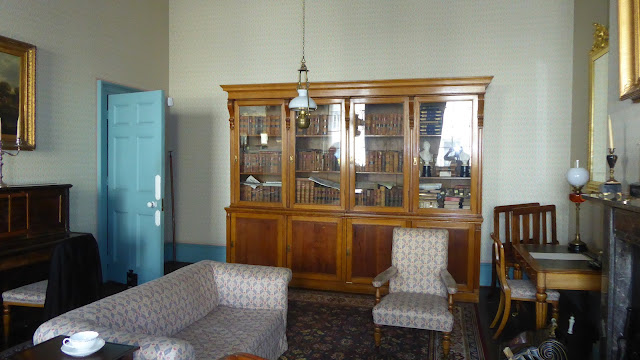 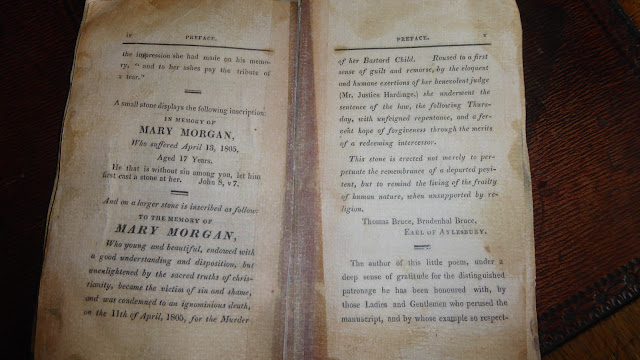 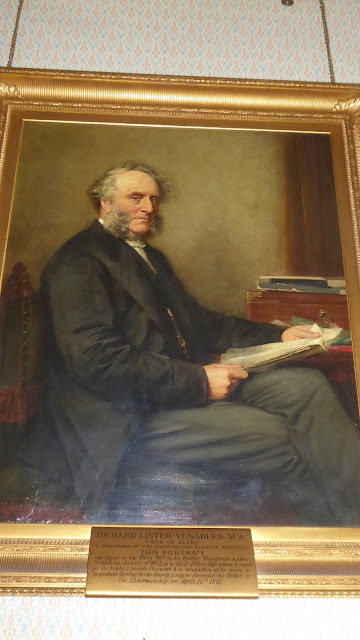 Hah! Another connection with Kilvert - the Reverend Richard Lister Venables, Vicar of Clyro and JP for Breconshire. 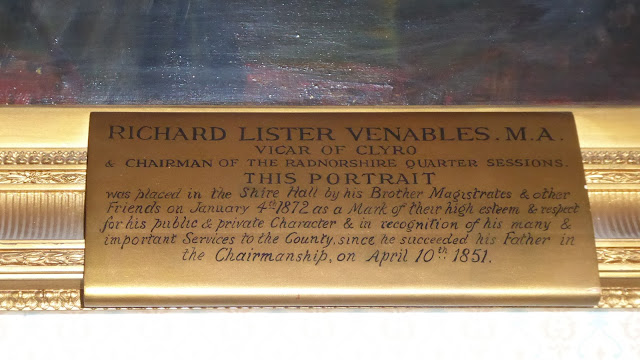 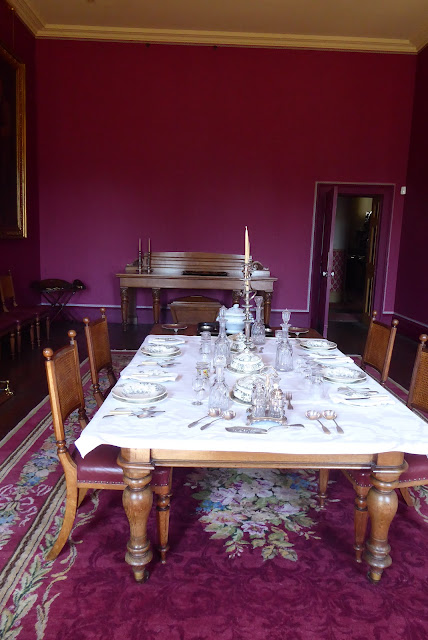 The dining room which had plate warmers, a huge wine cooler and all modern appurtenances.  Very grand. 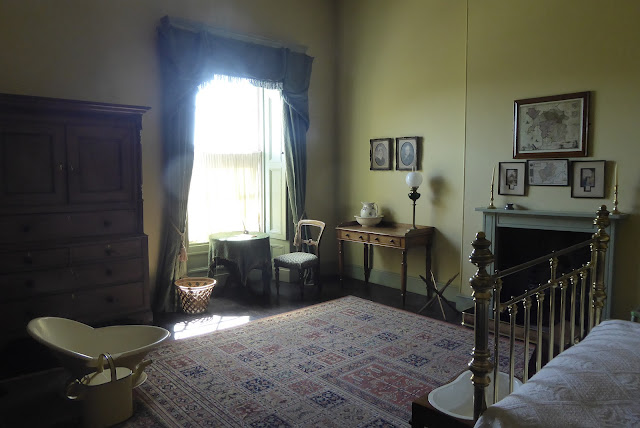 Here is the great man's bedroom , very sophisticated for the time, and  next door was his dressing room and next door to that, his bathroom. 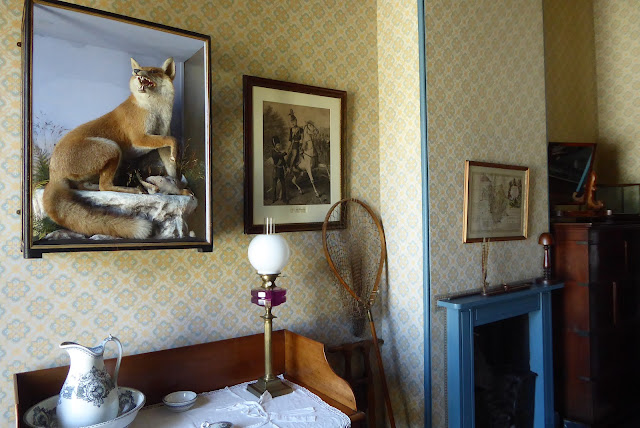 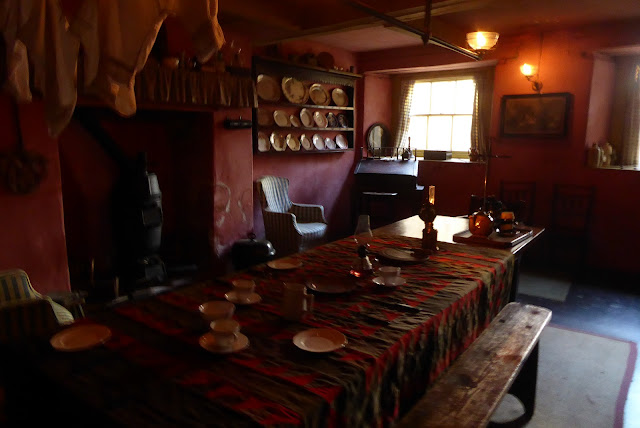 Now, the very best bit of all, the kitchens, larder etc.  Lit by gas, as it was back in the day, it was very atmospheric but I bet they couldn't see that well on a mid-winter afternoon, let alone at night-time. 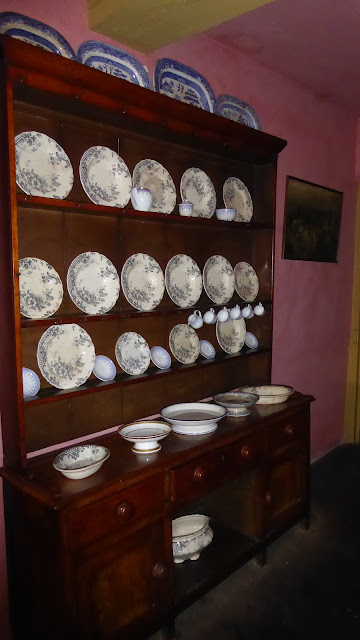 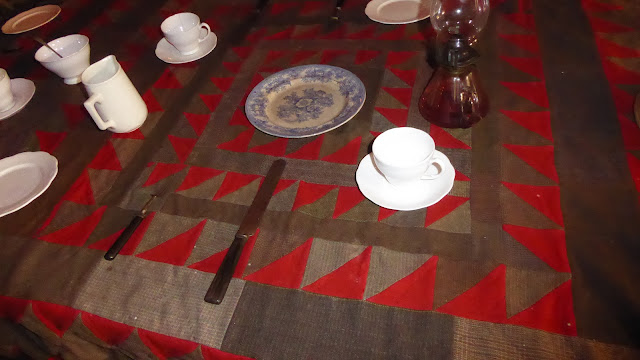 Note the use of an old flannel Welsh quilt across the table. 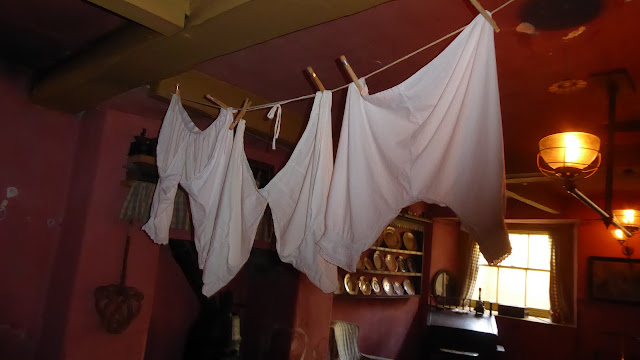 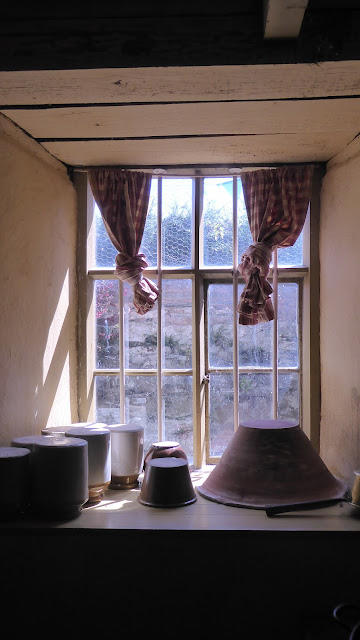 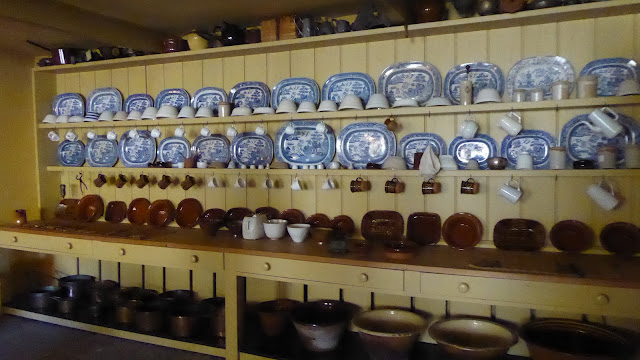 The biggest dresser I've ever seen - wall to wall across the room. 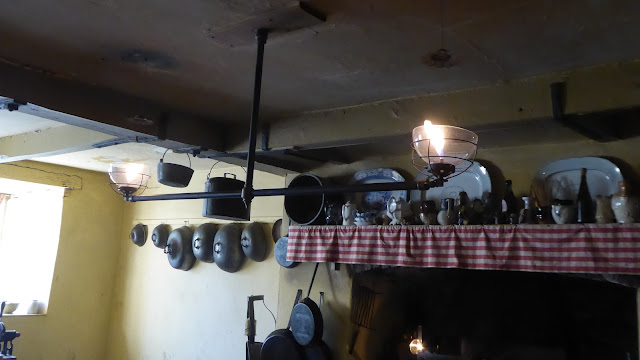 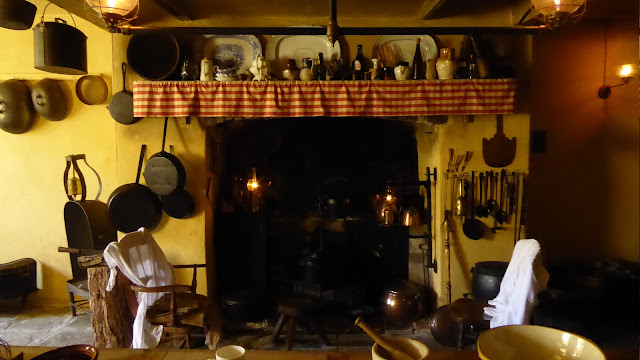 Isn't this gorgeous?!  I could be SO at home here. 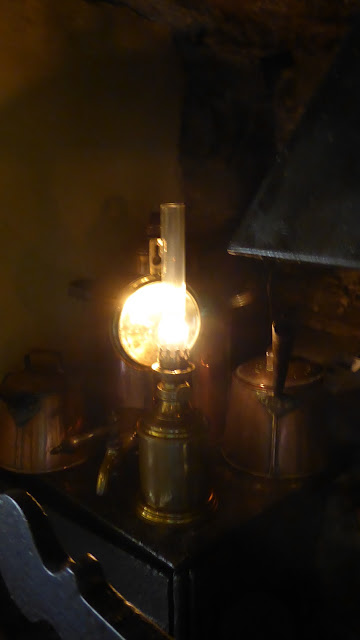 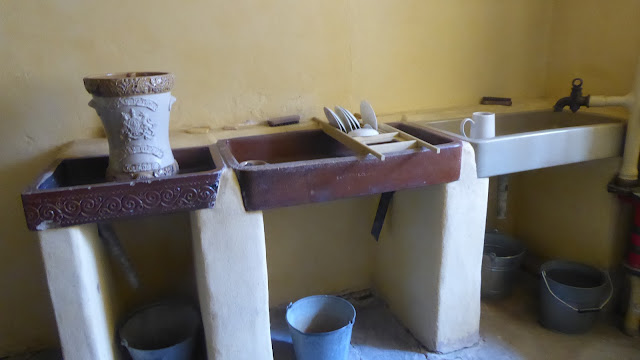 On the left of the sinks is a Victorian water filter. 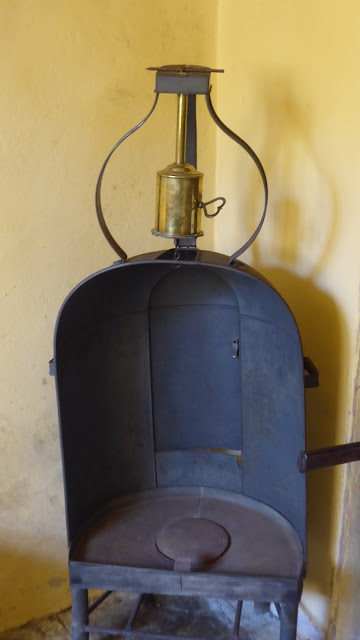 Bottle jack and spit, for cooking joints of meat. 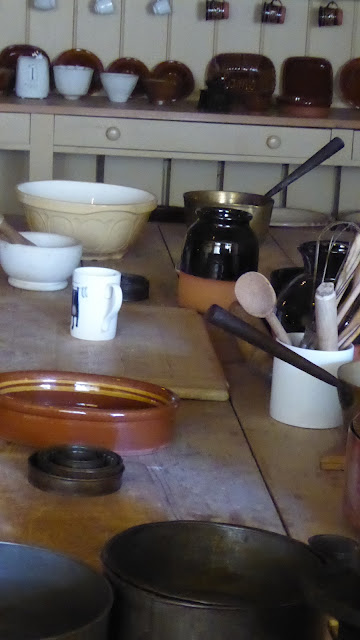 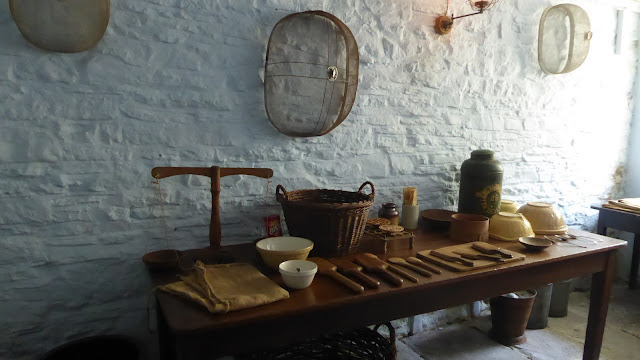 I will do posts on our perambulation of the town and a visit to St Andrew's Church in further posts.
Posted by Bovey Belle at 00:29