In which Keith goes church bothering too . . . 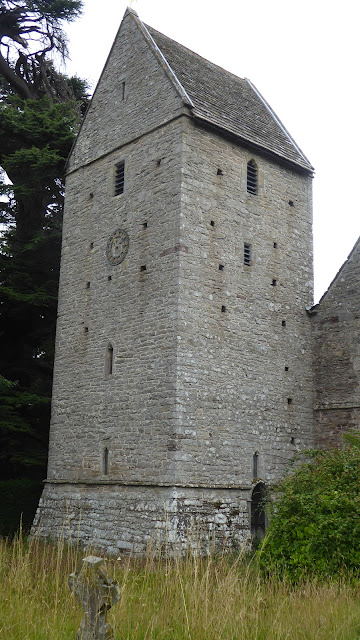 This is the church of St James at Kinnersley, on the Leominster road.  I visited it twice last week - first on the Wednesday when I did my tour of four churches, and then again on Friday because Keith was very keen to see the amazing Jacobean altar table and gilded reredos, with its amazing carvings.  We had driven past this many a time, thinking each time, that looks an interesting church.  Immediately behind it is situated Kinnersley Castle, a beautiful Elizabethan house dating to between 1585 and 1601 and built by Roger Vaughan, but Pevsner concludes it "must be a remodelling of a true castle, as e.g. the existence of the five-storeyed embattled tower proves." 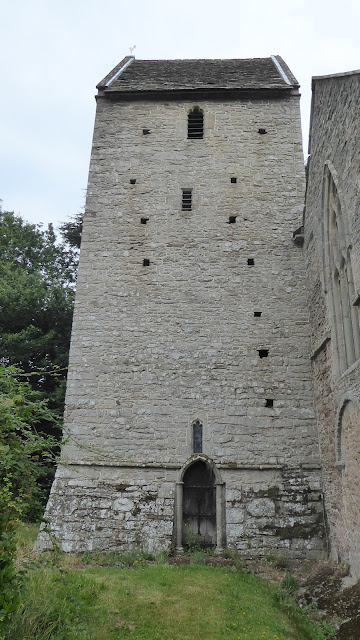 The earliest parts are the blocked Norman west doorway,  and the string course with rope moulding above it, and there is another string course above the N. aisle.  The window above the blocked doorway is Perpendicular.  Most of the church dates to the 13th C. although Pevsner thinks the impressive NW tower with its saddleback roof is a little later. 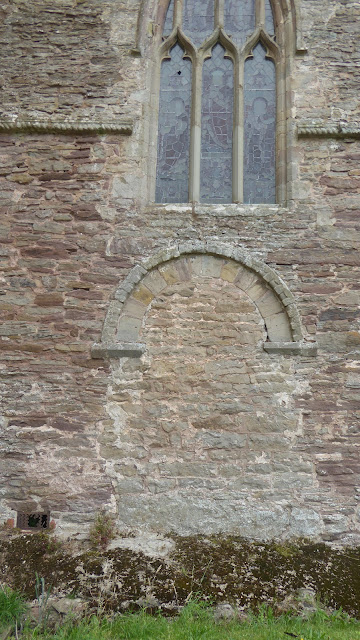 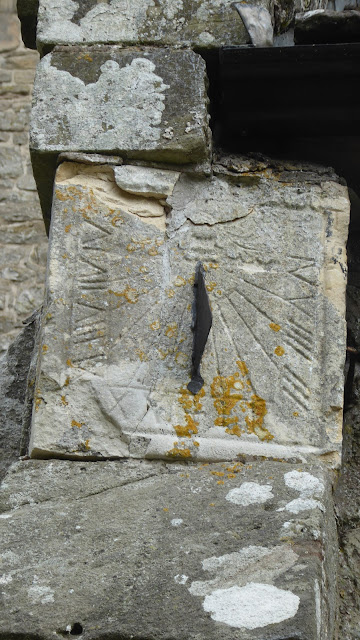 I nearly missed this old sundial on the wall. 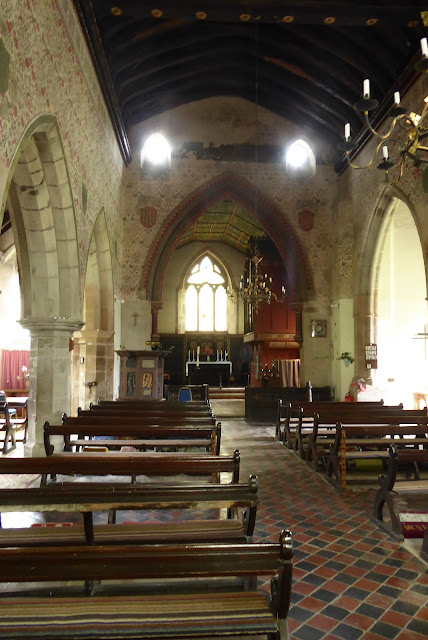 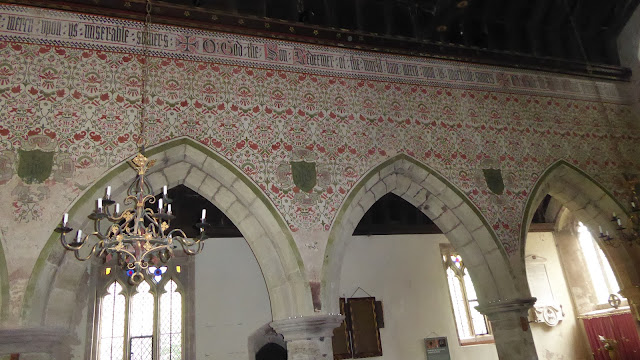 Renowned Gothic Revival architect George Bodley (a pupil of Gilbert-Scott's) was responsible for the updating in the 1870s when Frederick Andrews was the Reverend. Since Bodley married Minna Reavely in 1872 (her family lived at the castle) his involvement was no great surprise. He was also responsible for the fairly massive organ case, the castle side of which has attracted various initials and dates to be dug in with penknives down the years! 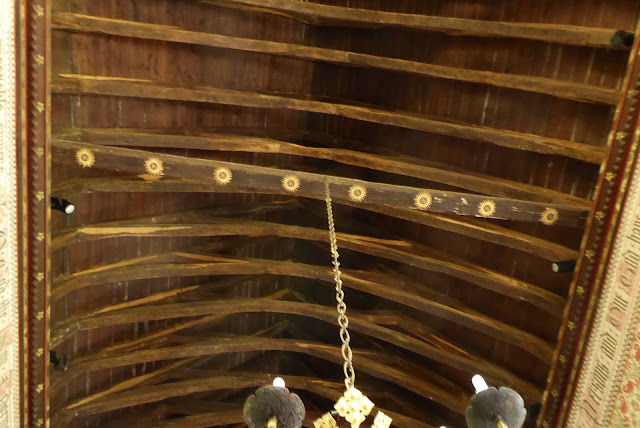 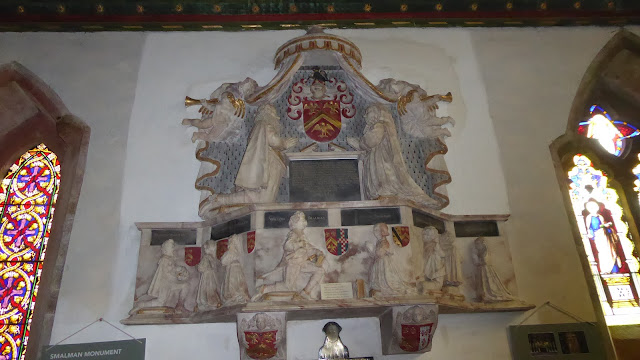 The most amazing memorial to Francis Smalman and his family, Lord of Kinnersley and Letton, who died in 1635, and his wife Susan.  They are shown kneeling and praying with a cherub fanfare above the canopy.  The eight kneeling figures of their children have individual dress and facial features, and are Francis (predeceased as holding a skull), Jane, Jone, William and Alfie Smallman, plus John Clarke, William Clarke and Susan Clarke.  Susan Clarke was Francis' 2nd wife. 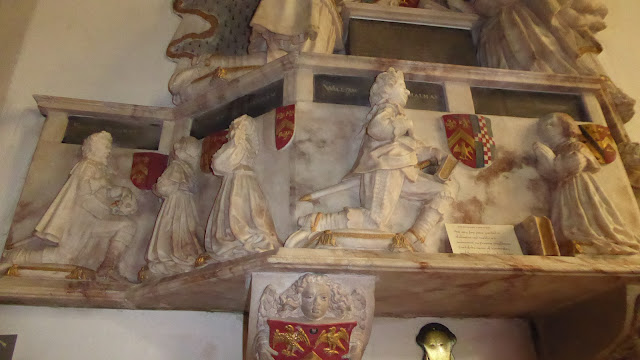 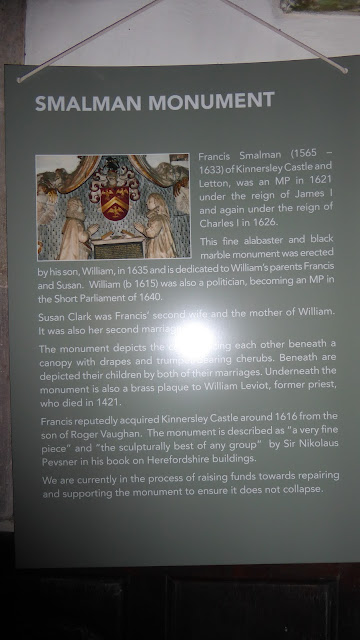 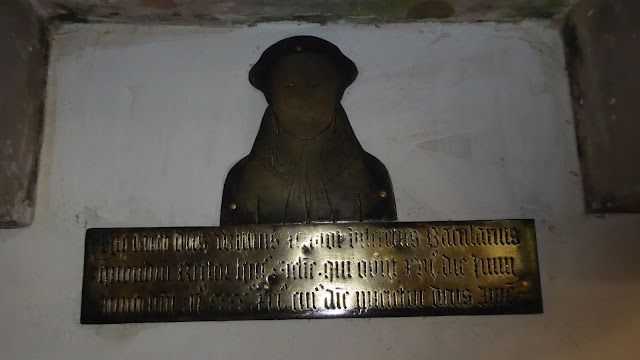 Brass in memory of William Leviot, a former rector of Kinnersley in the 15th C - he died in 1421. 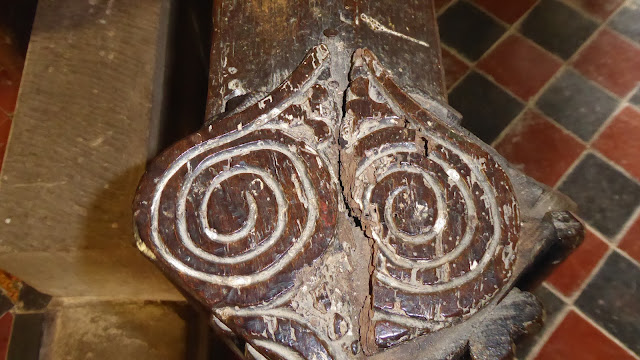 The rood screen was "amended" after the Reformation one assumes, but has several beautiful contemporary carvings which were placed along the top rail.  I especially like the heart-shape with spirals above, which looks a little like a mazed owl, and also appears as a true heart in quilting patterns. 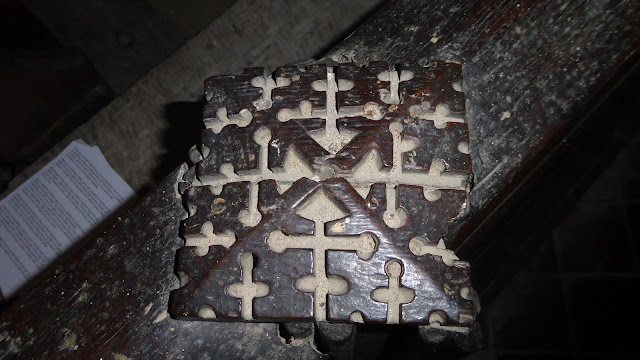 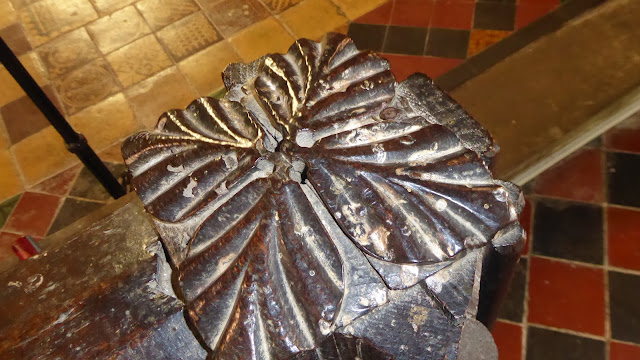 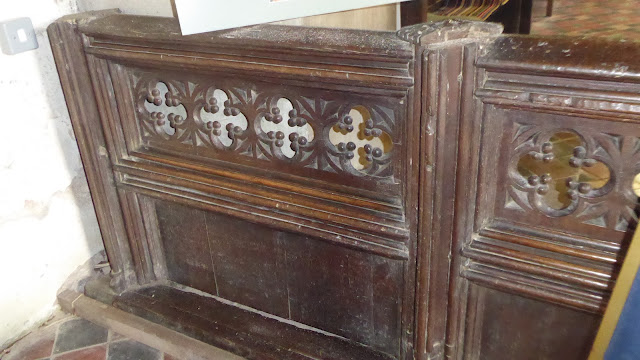 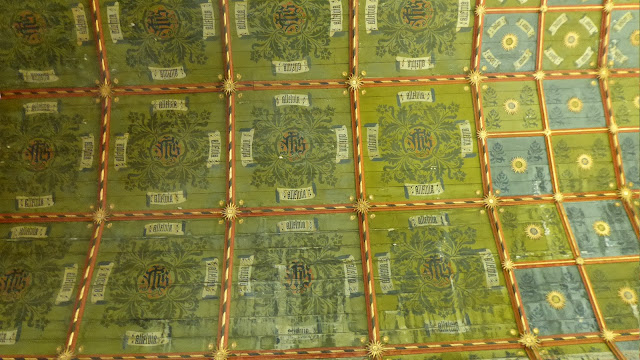 The painted ceiling and supports, designed by Bodley. 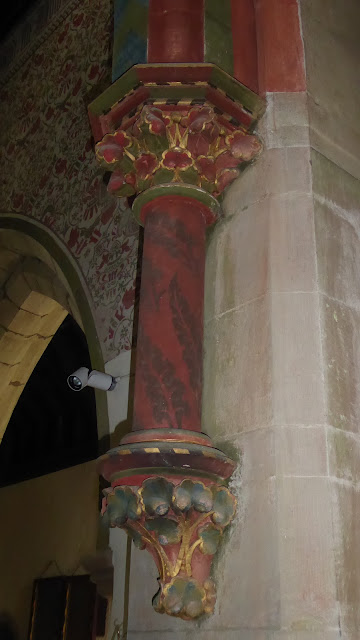 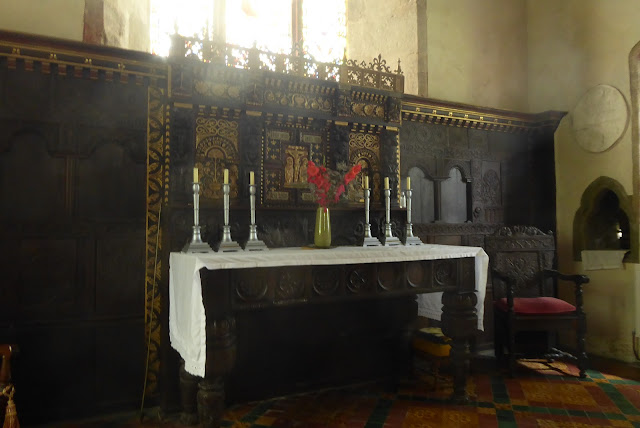 THIS was what Keith was so keen to see, the beautiful carved and gilded Jacobean reredos, and the equally carved and splendid alter table in front of it, clearly a gift from the Lord of the Manor.  I took many detailed photographs of the carvings, but will include just a few. 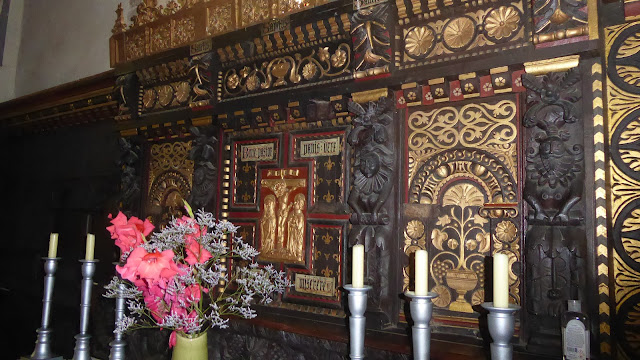 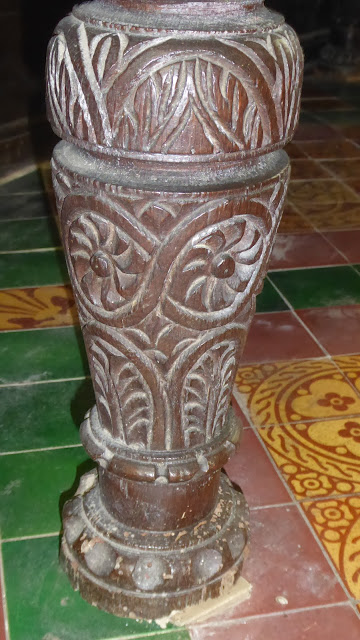 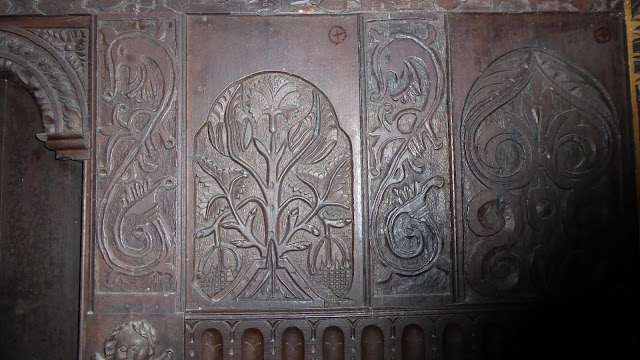 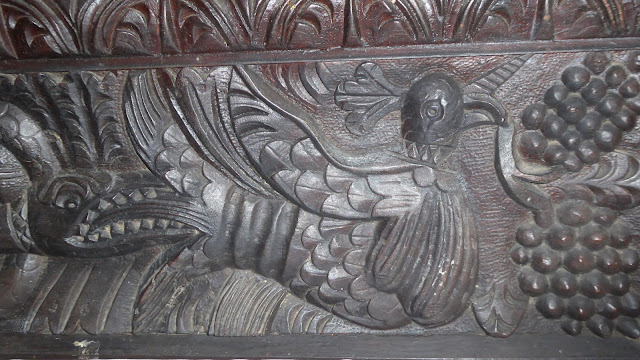 This wee bird turns up regularly in church carvings - love it's tail being bitten by something scaley with Sharp Teefs!! 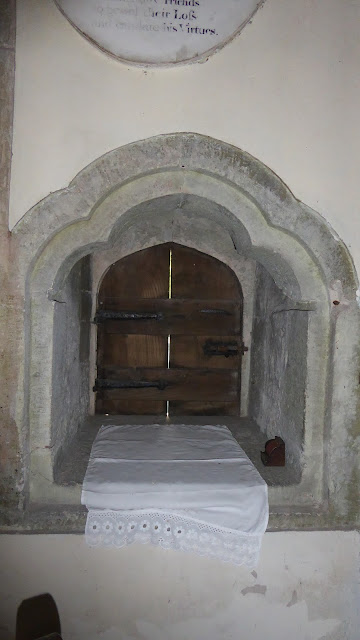 There were two of these little windows to the outside, with their wooden shutters - we wondered if they were for the distribution of dole? 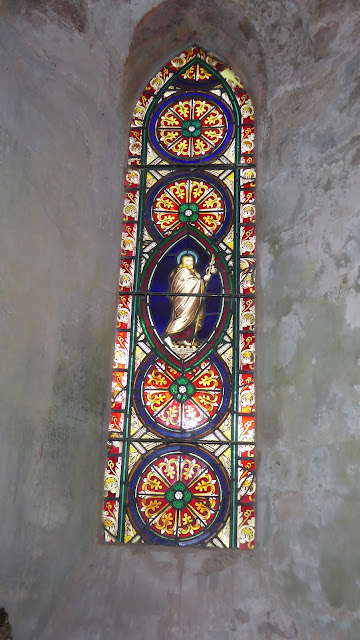 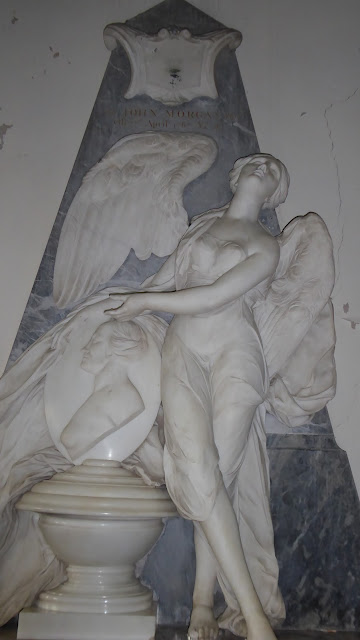 Another amazing sculptured memorial, this time to Dame Ann Morgan. 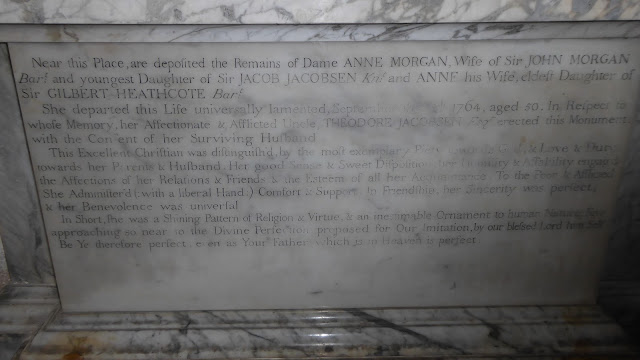 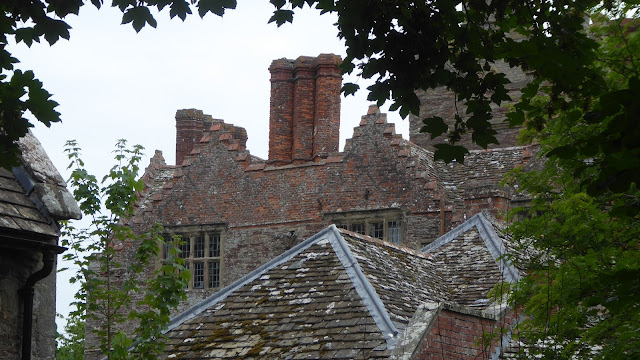 Finally, a glimpse of the beautiful Manor House.  You can just make out the castle tower behind the trees.
Well, I began writing this just after 5 a.m. this morning, but had to go back to bed - definitely woke too early.  Keith and I are about to go for a walk.  He managed 1/4 mile yesterday which may not seem much but considering he was struggling to just cross a room not that long ago, it is REAL progress.  We are working on it but won't see the Physio until the 8th. August.
Posted by Bovey Belle at 02:09