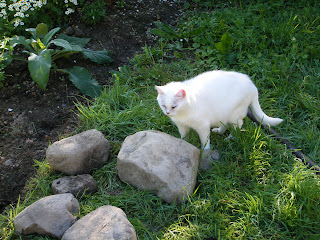 Sadly, we took the decision to have Snowy pts yesterday. The ear cancer had returned and suddenly looked much worse in the space of 8-10 days, and it was hard to tell whether it was inside the remains of his ear base. I couldn't bear the thought of it moving right inside the ear and causing dreadful pain, so we chose to spare him that. It was almost three years to the day since he stepped in through the kitchen window and took up residence in our kitchen, having been quite the wildest of feral cats I have ever seen. We only had to appear within his sight, and he was gone. It took a long time to gain his confidence, but food was always his weakness . . . 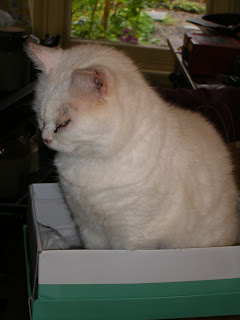 He has left a massive void as he was ALWAYS there, always in the kitchen, and usually very much involved with what I was doing. If I was reading the paper, he would plonk himself just on the bit I was reading, and snuggle up to me, purring and chinning my face. If I was cooking, he would sit on the recipe book until forcibly removed. He never got the idea that cats weren't allowed on tables, and broke all the rules . . . If one of the cats had a late breakfast, he would be there hopeful of just another little "tibby taster" as my dad would have called it, and he would always go round and finish up everyone else's leftovers. Consequently, he was the size of a house! 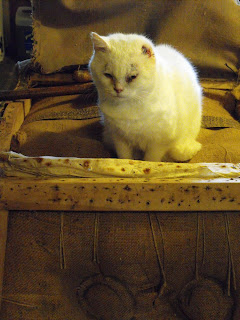 He oversaw the recent revamping of Keith's armchair, and sat wherever he could to check I was doing it properly! At least he had three years where he was never cold or hungry, where he ruled the roost, where he never had to fight for his territory (though he would still chase off the occasional stray tom) and where he gave as much love as he received. Bless him.
Posted by Bovey Belle at 00:35