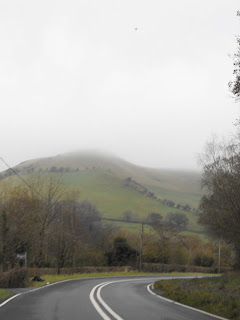 So far in 2010, creative thought has been hard-won. In fact, pretty well absent! I have just spent half the morning sorting out old boxes of paperwork, most of it fodder for the fire, but in the sorting, some notes taken on a day out to Brecon surfaced again. I think I've played with them before, but today they metamorphosed into this:

Pine boughs dangle limply like scarf-ends
Across the muddied verge, where
Bundles of twigs from hedging lie like a bristling eyebrow
Beside the dark maw of the winter ditch.
A narrow carpet-runner of weary green races beside the car,
Punctuated by forgotten cords of logs,
Shaggy with moss and lichens.
A blade of sunshine highlights dead bracken and
A swaying of bramble boughs dances against
A mausoleum of holly, black as a pirate's beard.
On the hillslope, a thicket of ill-planted ash and birch saplings
Jostle for company amongst a carpet of rotting leaves,
Moss-mounds velvet smooth at their feet
On the bare hill-top, stooped as a crabbit old man,
Stands a wind-blasted tree, leaning away from the winds,
Held only by tenacious roots.
The sun hangs low and brassy in the fading sky,
As shadows lengthen across the bleached grasses of damp hill pasture.
A densely-hedged lane gouges the fields,
And dangles the hillside like a funeral ribbon.
Posted by Bovey Belle at 04:49