Social history fascinates me. It comes hand-in-glove with researching my family history of course, as I want to know what life was like for my ancestors and I am particularly fascinated by the Victorian period - especially in rural areas. 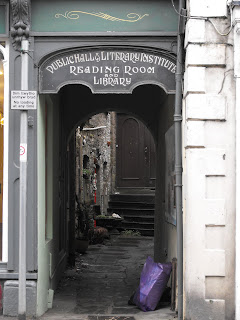 In Llandeilo recently, I was again reminded of the past, when the working classes, even if they were sufficiently educated, had little recourse to books of their own, butt would attend the penny readings (written about so eloquently in Kilvert's diaries) or visit the reading rooms and libraries as the above photograph shows. What a lot we take for granted these days.

Last night I sat with my x-stitch project, sewing diligently with the television on in the background (my menfolk were watching a DVD of their choosing), by the warmth of the woodburner, and me with my excellent anglepoise-style magnifier and sewing light, I thought for a while about my lace-making ancestors in Shutlanger and Stoke Bruerne (Northamptonshire), huddled around a small fireplace lit with hedgerow sticks (brought home by them), working on exquisite lace by the light of a candle reflected from the water-filled glass magnifying flask. At least I can sew when I want to - they worked to feed themselves. 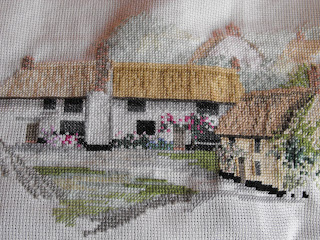 (I'd have been paid nothing for this - I've just noticed I've sewn some of the x-stitches with the top silk in a different direction . . . Unpicking to do now . . .)

How different my domestic scene from that written about in a copy of Girl's Own magazine in Victorian times, describing the lot of a woman who must needs take in "plain sewing" to keep her family fed:

"I used to get 1s 4d a dozen for making and finishing, all complete, full-sized strong shirts. These had back-linings, straight bands, five buttonholes, and seven buttons. If there were two gussets or vents put in, I had an extra penny a dozen. Buttons were found, but not needles or thread . . . I knew one woman that never lay down in bed for three months, but took what rest she had sitting in a chair. She thought she should never muster courage to get up if she were once comfortably under the clothes. She had four children to keep somehow . . . For handkerchief hemming a penny-farthing a dozen, or 15d a gross, is paid. A girl I know does handkerchiefs, and gets 10s. a week or so without expenses off. One week she'd been at it nearly night and day. She was saving for a new gown. She carried in 15s worth of work, and the master said she was earning too much, and knocked off 1s!"

According to Charles Booth's Life and Labour of the People in London (1889): "Home workers, machining a poorly paid class of shirt, can earn 2d - 3d an hour if at all skilled." (Thus 10 shillings to 15 shillings for a 60 hour week.)

Or think of the weeks and weeks of sewing by a poor light to make this wonderful wedding-dress:

"I have rather set my heart on a cream-coloured Indian muslin made with a plain skirt, edged at the bottom with three rows of narrow satin ribbon worked over in silver thread in this manner - a row of silver crosses webbed over the ribbon. The bodice made with a full waistcoat of silver embroidery or cream and silver gauze, and a line of the silver on the cuffs. Your hat must be made of the cream muslin, a Vandyke shape, with a bunch of silver wheatears and pale blue cornflowers and your bouquet must be tied with blue and silver ribbons. You must wear tan gloves and shoes, and I rather think you will please Walter's faastidious taste in this rather fetching "get up". "

And then there is the "inexpensive Trousseau" (for £30):

"Let us begin with nightgowns," says Aunt Margaret briskly, "Of which I think you may find nine enough." The nightgowns are to be made of calico, by Queenie herself, also the same number of calico combinations and half a dozen camisoles for summer wear. In addition the bride has four flannel petticoats "embroidered with flossine" (think this should be flossing?), two white petticoats, summer underskirt and a winter petticoat, one pair of white "bridal" corsets and one pair of black, four pairs of black spun silk stockings at 2s 6d, four lisle thread pairs at 1s 11d, and eight black cashmere pairs at 2s 6d. Dresses recommended are "one of the charming boating-gowns of navy serge which look so well on cold summer days", a vieux rose zephyr dress and, for evening wear, a pretty black Russian net skirt and bodice, and "a perfectly plain lizard-green velveteen, without a morsel of trimming, cut low back and front."

Extracts taken from "Great Grandmamma's Weekly" by Wendy Forrester (A celebration of the Girl's Own Paper 1880 - 1901)
Posted by Bovey Belle at 00:55