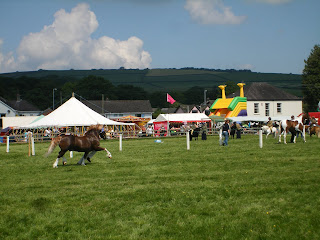 Morning's Minion has been writing about the Morgan Horse over on her blog and I can remember reading, half a lifetime ago now, that someone had reckoned there was Welsh Cob blood in the mix that made Justin Morgan, the founder sire of the breed. It would certainly explain the incredible trotting gene . . . The photos shown were ones I took at our local show (Cothi Bridge) a couple of years ago. I reckon, put a few outcrosses to Thoroughbreds and here you have the Morgan horse . . . George Borrow wrote of riding a Welsh Cob which rattled his teeth and trotted at 16 mph! I will try and find the passage later. 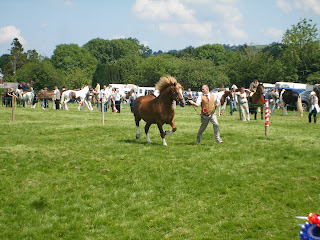 Visit HERE for photos of the Welsh Cob stallion lineups at the Royal Welsh show in 2007 and HERE for the complete Welsh cob lineups. If you click on the sire's name you will get direct links to the stallion websites, with photos. Ebbw Victor was the grandsire of our Maggie.
Posted by Bovey Belle at 01:32