A walk on the beach

Today turned out sunny and warmer than expected for February. After a fruitful wander round the car boot sale, we drove a few miles along the coast to the mouth of the Towy estuary at Llansteffan. 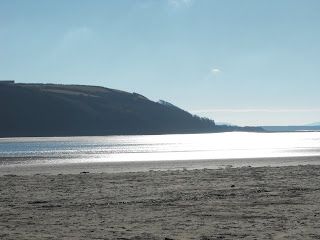 The headland beyond Ferryside. Llansteffan has been a popular holiday resort for Welsh folk, especially those from the valleys, over the years. During "miners' fortnight", local houses would be full to the rafters with miners and their families, the bedrooms partitioned off by blankets to cram as many in as possible. 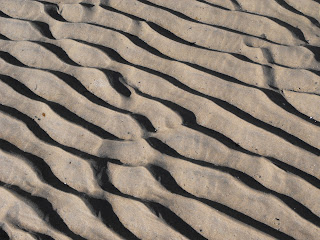 Ribbed sand below the cliffs. 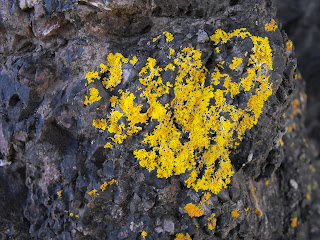 A beautiful lichen the colour of Sherbert Lemons. 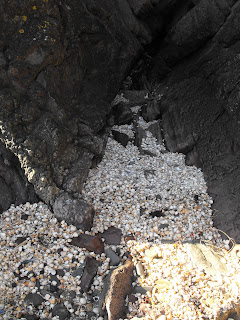 In the folds of the rocks, storms had heaped shells in their thousands. 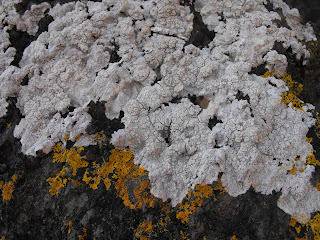 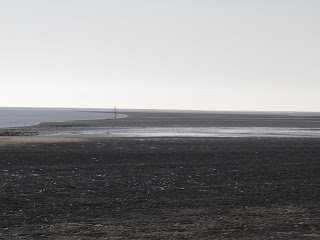 No cockle-pickers out there today, but in season you will see 4x4s parked right out beyond the marker. In the past there have been "Cockle Wars" over the Ferryside cockle beds - 1993 was the year when this little sleepy seaside village hit the headlines of national newspapers. When you understand that there is big money to be made from cockle picking, the "turf wars" and the tragedy of the deaths of Chinese cockle pickers in Morecombe Bay begin to make sense . . . 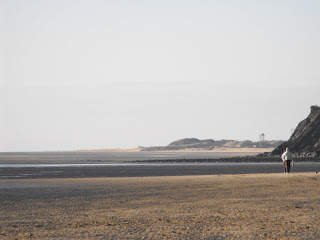 We only walked along the beach a little way, just to look across Scotts Bay towards East Marsh, below Laugharne (of Dylan Thomas fame). Scotts Bay is named for captain John James Scott who lived here with his wife and large family in Victorian times, in the cottage beside St Anthony's Well. This Holy Well had a reputation for healing, as well as being a wishing well much used by love-sick people. There was a niche above the well for "offerings". It was on the Pilgrim Route to St Davids and many people would have passed by it on their way to the ferry across to Laugharne. In later times it was the custom to throw pins in the well, rather than money, when making a wish. 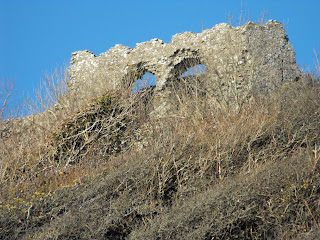 Above us, a glimpse of Llansteffan Castle. Built in wood in the 11th Century, and then again in stone, the castle was predated by a Bronze Age settlement. 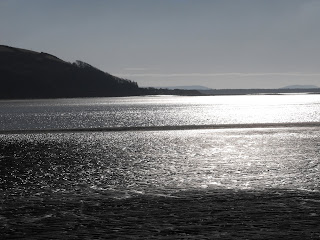 Looking out across the mouth of the Tywi (Towy) Estuary across Pembrey and in the distance, the end of the Gower Peninsula at Rhossili Bay and Worms Head. 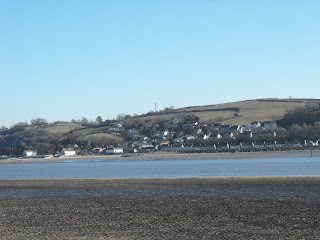 Across the estuary is Ferryside. Snuggled into the hills just behind Ferryside are the ruins of Iscoed Mansion, General Sir Thomas Picton's residence. He died at the Battle of Waterloo and there is a memorial to him in Picton Terrace in Carmarthen. 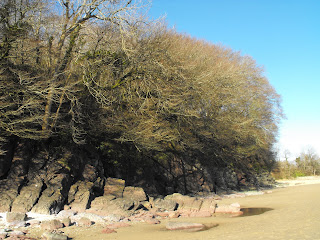 Below the castle, the trees grow right above the beach. The area of woodland is known locally as "The Sticks". 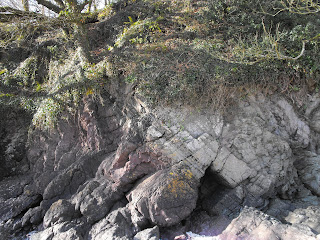 A geology lesson - here, like other parts of Britain's coastline, the strata has been heaved up. 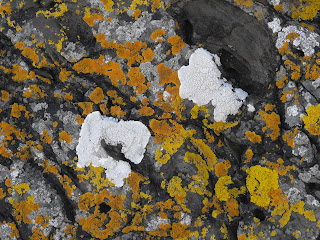 This holiday cottage website gives a potted history and some photographs of Llansteffan.
Posted by Bovey Belle at 09:37