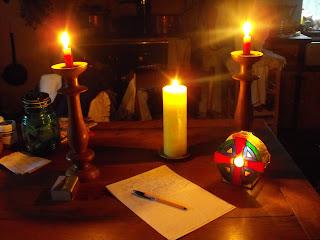 Is there really such a thing? Another dimension? Something that could explain ghosts and similar phenomena? I mention this as there was a piece in the paper today about husbands and wives/families being "on the same wavelength" as one another quite frequently. I've had this a LOT this past week where I have had a thought of a person - daughters - thinking, wonder when they're coming home, and the next moment they walk through the door. Or the phone rings and I say it's so and so, and it IS. But that's old hat, I could do that from early teens onwards.

How about phantom smells? I was going to bed one night and as I crossed the landing, just outside our bedroom door I smelt the unmistakable smell of a just-blown-out candle. My husband smelt it too. A past moment in time slotting into our time? A gift from a parallel universe? You tell me . . .
Posted by Bovey Belle at 05:34