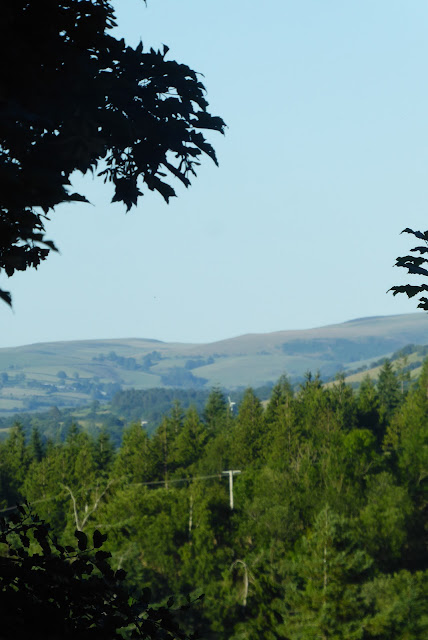 On Wednesday evening, my friend Pam and I joined a small group of local ladies for a Swift Awareness Walk down in the town, organized by My Wild Brecknock.  (Brecknock is the old word for Brecon).  I have mentioned that we have the Swifts from the town coming and hawking for insects above us here, with their distinctive screams.  I love to see and hear them.

Pam had no experience of them and has L plates up when it comes to identifying birds, but she's interested and was amazed to see a group of about 50 (when they joined together) flying above us.  We went to several nest sites - they are up in the old warehouse style building now housing flats, near the Co-op, and nest behind the barge boards, if there is a good enough gap. A private house was another site, but here are many more unknown nest sites about the town.

It was a lovely evening, and Pam and another lady are going to go out a little later one evening after the Royal Welsh Show has been and gone, and try and identify houses near the Groe where Swifts may have set up home.

Meanwhile, I have been doing a bit of clearing up on the Bank, till my streaming nose stopped me and I realised that it was the Dock pollen affecting me now.  I really can't win!  After years where my nose didn't run and my asthma was made much worse instead, to the point of a steroid course every summer, a return to a runny nose is a great improvement, though not enjoyable! 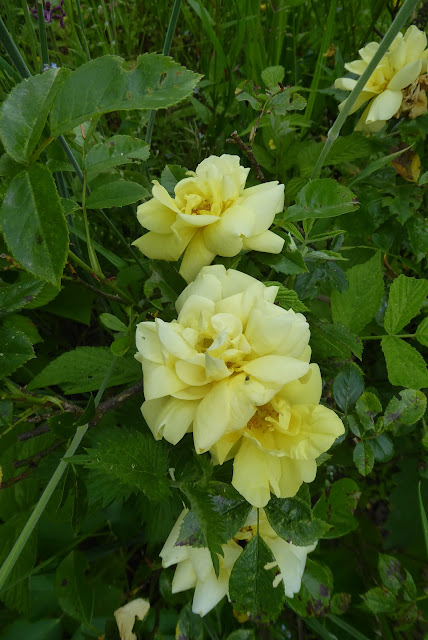 We had Tam and Danny visiting yesterday, so were able to get a few "move its" done by our strapping son.  It was too hot to garden though, and neither could stay long as they had other calls on their time.  Lovely to see them though, and they both liked the new kitchen although Tam thought I should have painted the back wall of the kitchen in the lighter colour as it look "positively teal"! I baked a fresh loaf and a River Cottage Sticky Gingerbread cake, early in the day.

As it's the Royal Welsh show all next week, folk have been turning up early to camp/park up on fields by the showground or just outside of the town.  The farmer our side who has them on his land is having to supply water, and of course, that is a big ask at the moment.  I'm glad we're not camping with the temperatures predicted for  the next two days here (35 deg. C) - ok, better than the 40 deg. in the red alert areas, but bad enough.  We were glad to live in a house that is partly below the land level as it keeps it nice and cool, as do the thick stone walls. Keith and I won't be doing much outside, that's for sure!

Keep safe everyone, and let's hope we don't have a rerun of post-Lockdown-summer last year when those idiot lads were jumping off Durdle Door.