In the footsteps of Betjeman - the wonder of St Margaret's Church 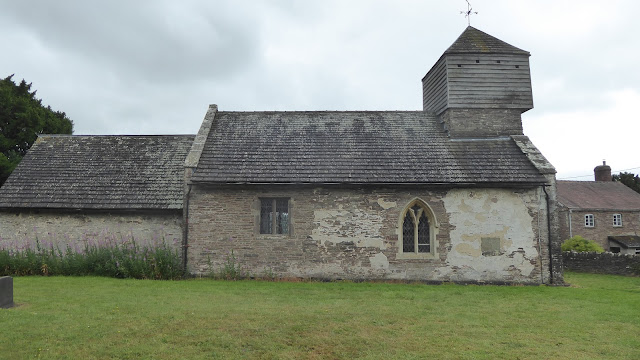 This gave Pam's Sat-Nav a real workout, as the only directions I had were in a book, which said "about 2 miles behind Vowchurch and Turnastone (both worth visiting.  Since we were approaching it from the A465, this information was not a lot of use!  Anyway, as you will see, it was well worth seeking out.  In fact, we were walking in the footsteps of Poet Laureate John Betjeman, who wrote of it: "My own memory of the perfect Herefordshire is a Spring day in the foothills of the Black Mountains and finding among the winding hilltop lanes the remote little church of St. Margaret's where there was no sound but a farm dog's distant barking.  Opening the church door I saw across the whole width of the little chancel a screen and loft all delicately carved and textured pale grey with time." 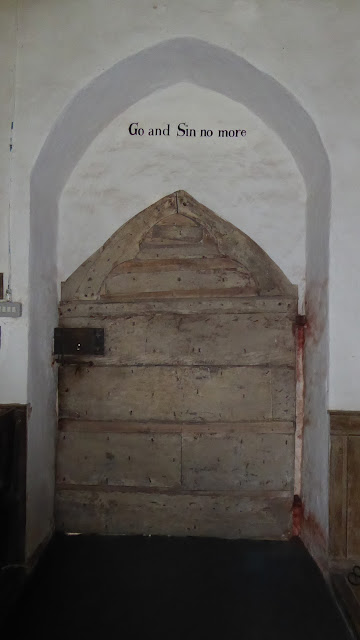 This is the back of the entrance door - hugely solid oak planking, and above it one of the wall texts which were originally added in the 18th C but subsequently restored by Mr Maxwell Jones of Redditch in 1974. 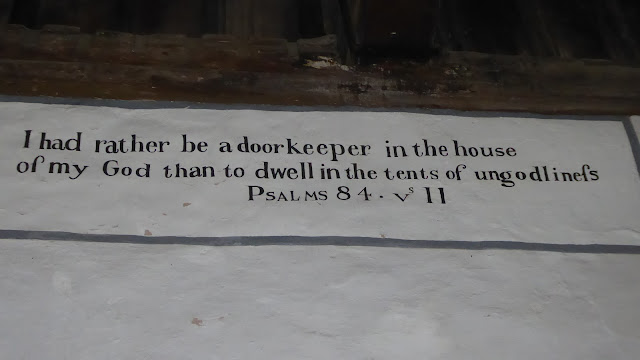 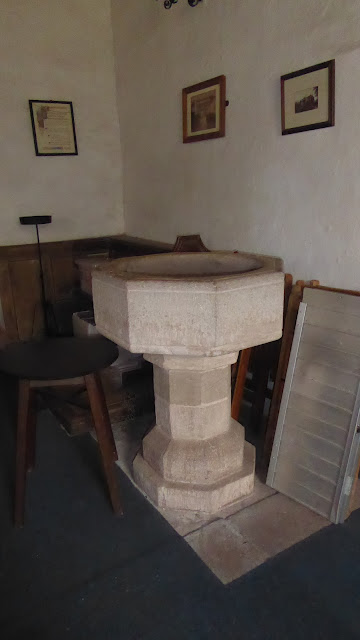 A plain font which I thought at first to be Norman, but it is probably 14th C although it has a very shallow bowl for that date and may be as much as 3 centuries later. 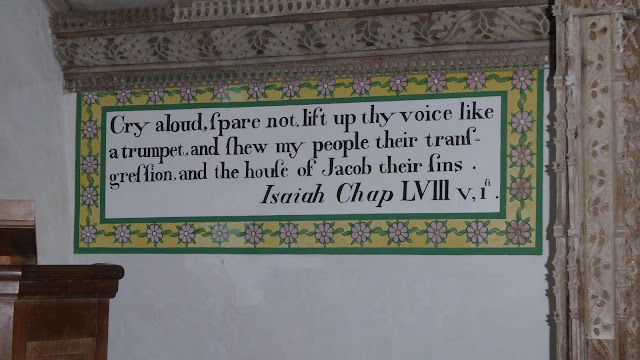 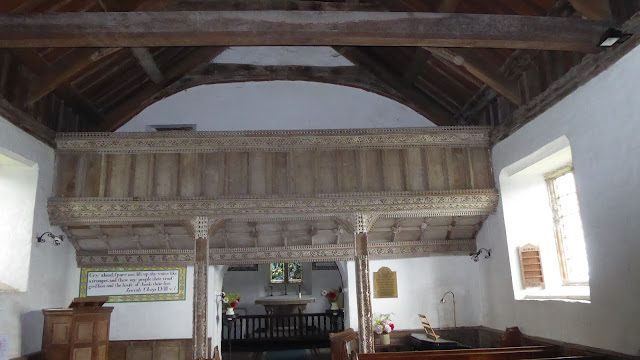 Just WOW!  I know exactly how Betjeman felt on seeing this amazing rood screen.  Pevsner called it "one of the wonders of Herefordshire, deliciously carved" in his book on the county (which I may have just ordered from Ebay!!) 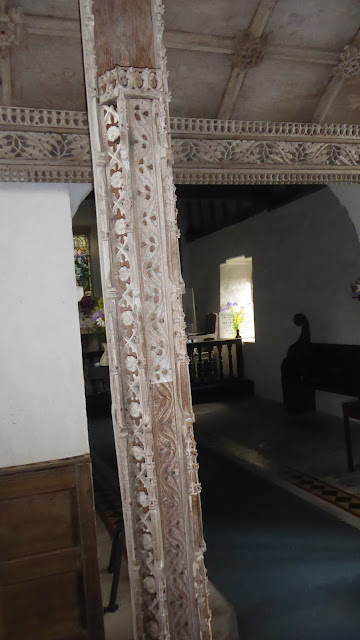 This is as near to wooden lace as you can get.  Superb craftsmanship reminiscent of Llananno, in fact it IS believed to be  a Welsh made rood.  The niches in this column would have once held figures of the Blessed Virgin and St John, and there would have been a large Crucifix above it BUT after the Reformation an order was made in 1547 ordering the destruction of ALL images and nearly every rood in the county was destroyed.   Prior to 1547 these figures would have been dressed with nosegays and garlands for Festivals, but during Lent would have been covered in veils.  It is fortunate that the destruction of the lofts was left to each Parish to decide and  they were obviously very fond of theirs and sought not to destroy such amazing craftsmanship.  But just imagine what has been lost. 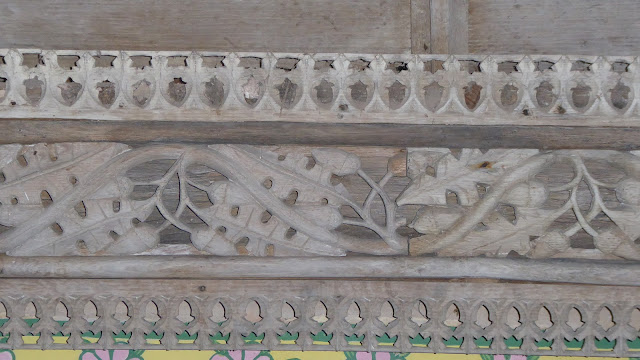 "The upper and lower rails of the loft are enriched with running vine foliage friezes and brattishing." (Brattishing is a decorative border often of leaves and or flowers, especially associated with the Tudor period).  This screen would have originally been richly painted and gilded, and must have looked amazing. 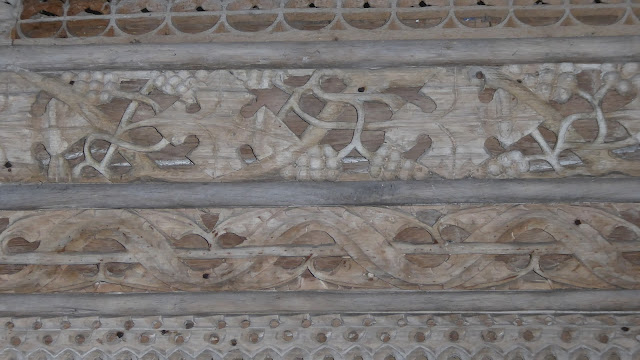 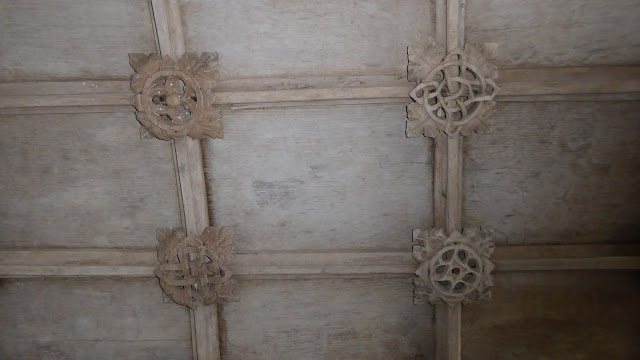 At the intersections of the ribbing are bosses, many with men's heads (one with his tongue out), lions, interlaced knots, foliage and other devices.  I imagine the carver had a lot of fun with these. 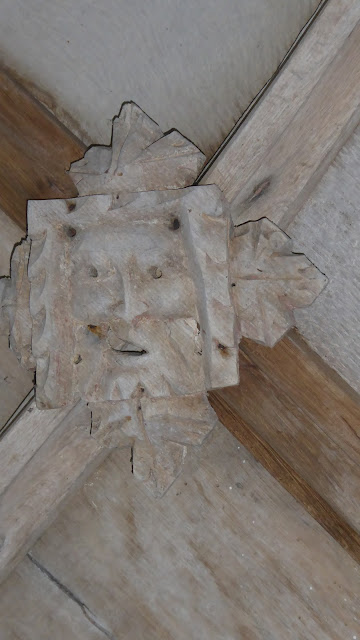 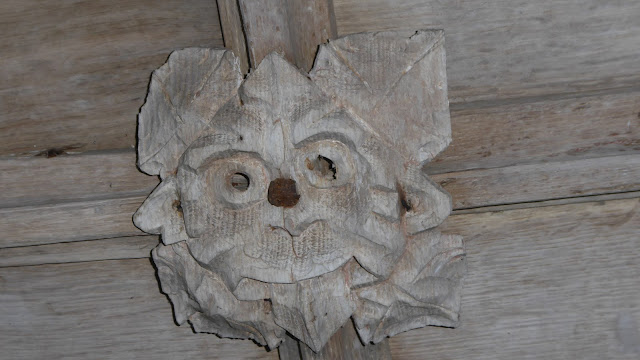 The face poking his tongue out! 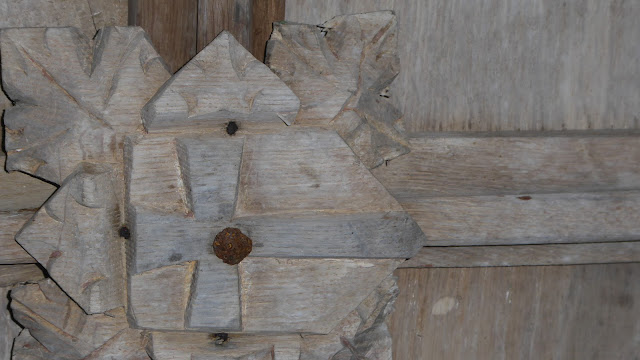 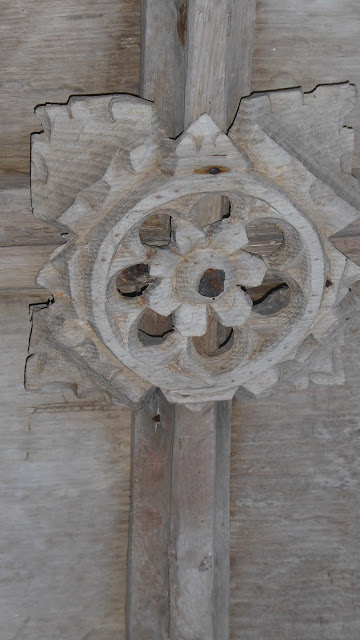 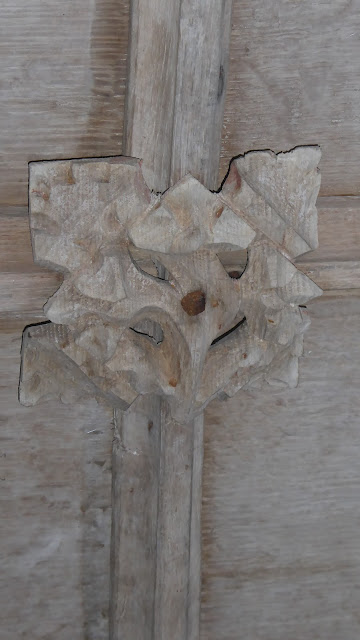 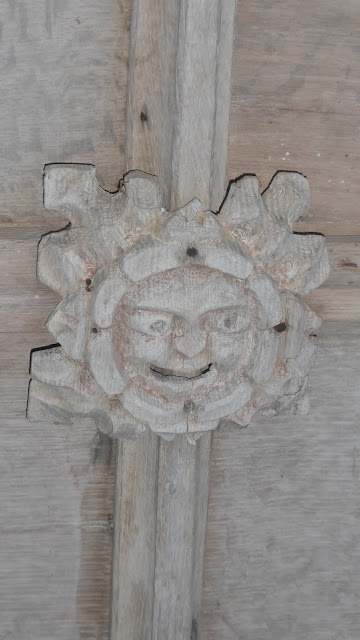 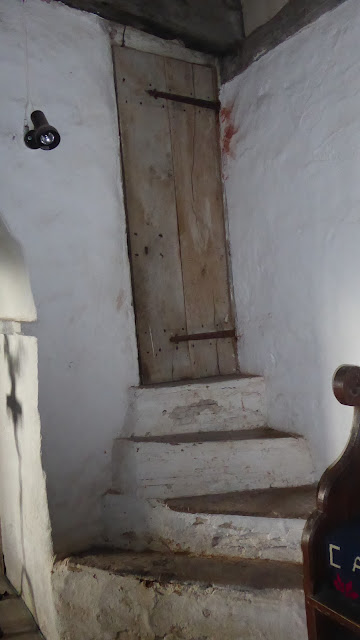 Old steps and two-plank door to the rood loft. 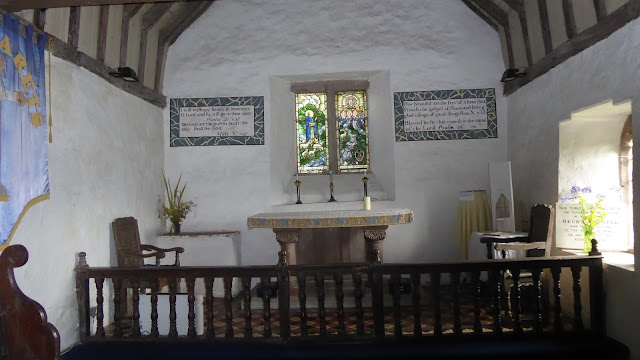 The Chancel with its beautiful windows. 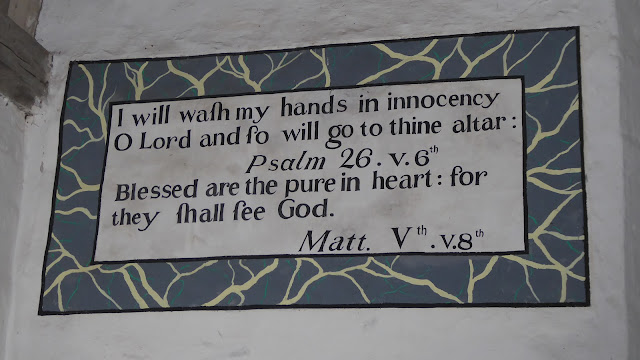 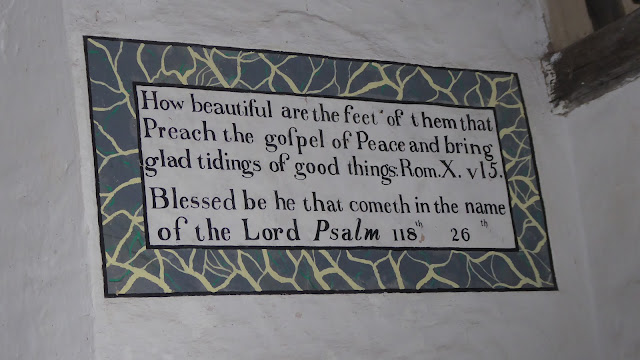 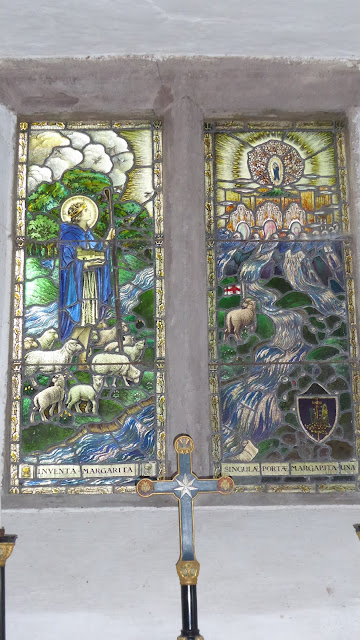 These stunning Arts &Crafts stained glass windows of St Margaret as a Shepherd(ess) are by Archibald John Davies (1878 - 1953) of the Bromsgrove Guild.  Some of his work is also in Hereford Cathedral (another reason to go back again soon) and there's a book about him.  These are lovely windows. 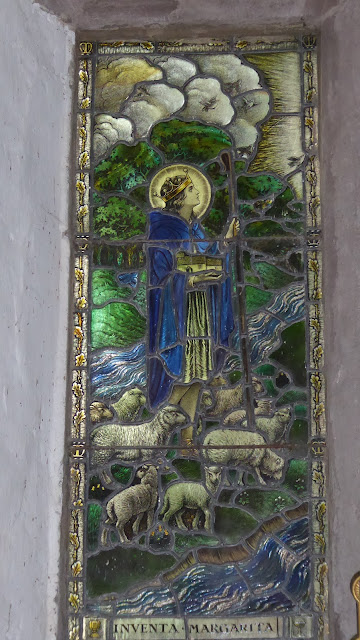 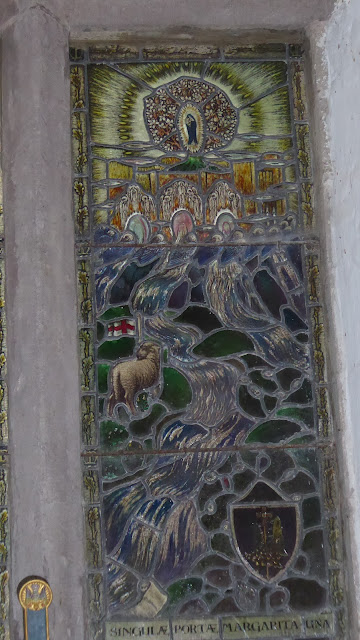 A shame the sun wasn't out more when I took this photo. 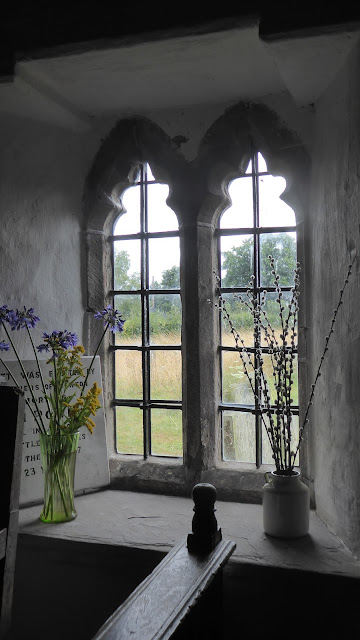 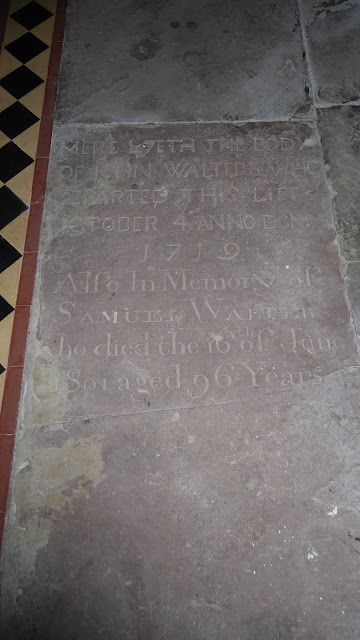 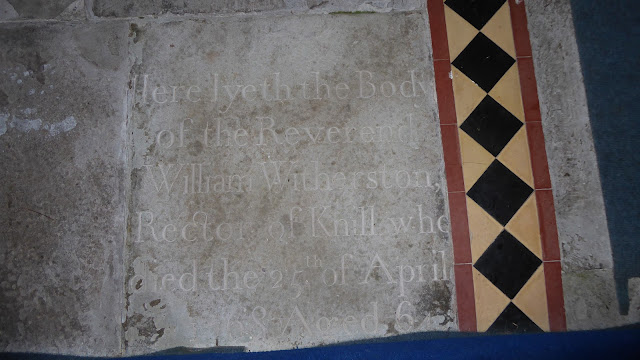 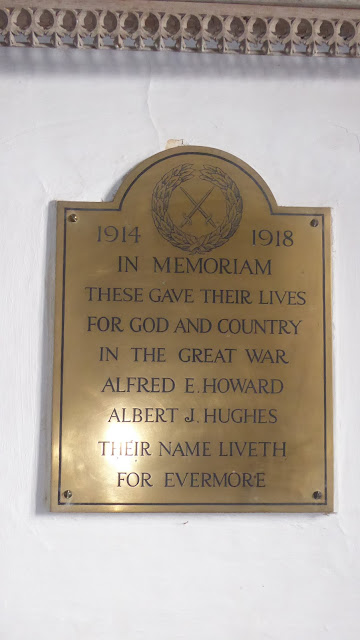 Outside, the churchyard was God's Little Acre, with just a mown pathway around the church and masses of wild flowers - Bedstraws, Wild Carrot, Knapweed,.  Definitely one to seek out if you are in the area (and you can do Kilpeck in the same day, as we did), but be mindful that Kilpeck is currently being re-roofed and so two thirds of the beautiful carvings are surrounded by wriggly tin and can't be viewed.

Details of the church interior taken from the little Church booklet which is well worth spending £1 on.