A view of a restored farmhouse in the next valley across from ours. 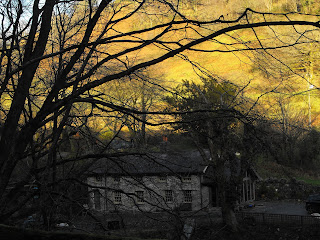 I haven't achieved much today - though I did rip back my lacy scarf and hopefully now I'm knitting the right pattern - I had somehow messed it up and had to rip back over 20 rows : (

Hearing the chainsaw, I wandered out into the yard and watched my husband for a while, before feeling guilty because I was doing nothing, so I picked up the yard broom and began to sweep. This was as good as physio, as I felt shoulder muscles unlock and start moving usefully once again! We both ended up sweeping up the leaves from the entire yard and the stretch between the stables, plus washing it all down. Still plenty to do out there, but that can be tackled the next dry day (though saying that, we worked in the drizzle this afternoon).

At one point I ran in and jotted down today's A.R.O.S.:

Willingly I toil, and curse muscles feeble from winter,
Thinking of those who laboured - and had no choice,
No reward, bar death . . .