Armageddon in a Welsh valley . . . 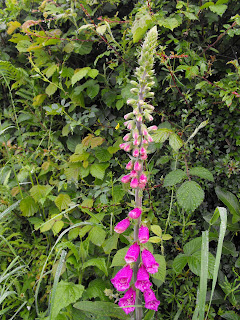 Death and destruction for the plants alongside what used to be a pathway through the woods on Next Door's farm. A few years ago he widened it into a four-berth cow highway. Then before Christmas he cut dunnamany trees down, mostly sickly ash and sycamore, but some decent specimens too. It all went for firewood. Now the big yellow JCB lumbers up and down, and having dragged out the stumps it is now digging away at the hillside and broadening the trackway so half the 250-cow milking herd will be able to walk abreast along it. The yellow boulder clay forms a base for the slate and shale bedrock which is dragged out next, although with that number of cows traipsing back and forwards twice a day in each direction when they're pastured over that side of the lane, the shale soon turns into mud. 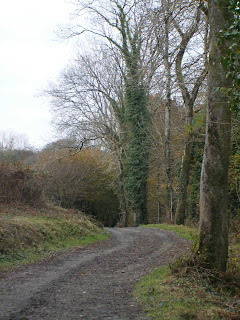 The top of the track, as it was. 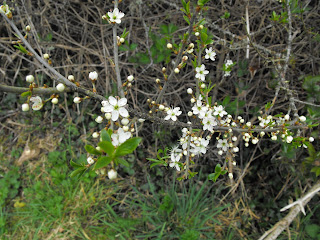 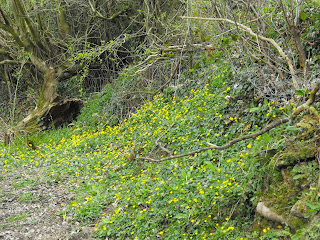 Celendines (in our paddock, rather than along the trackway, although they were prolific there.) 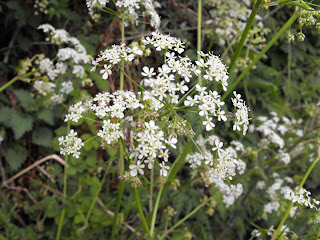 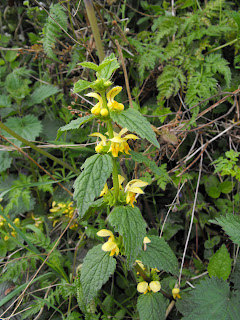 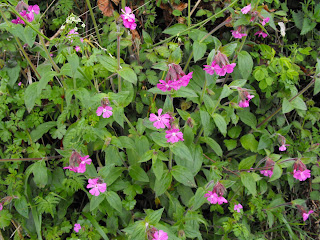 I hate to hear the bellowing and shrieking of this citric yellow monster destroying the countryside - a trackway I know well from dog walking, horse riding, blackberrying. The flowers of this wilderness are now gone, mangled beneath tons of earth and shale. I shouldn't think the badgers are impressed either. The Elder trees which lined one side of it are ripped out and buried beneath the wider track. It will be years before the soil re-establishes itself from leaf-fall and the colonies of wild flowers make a proper comeback. No Foxgloves there this year. No Blackberries. No Celendines. No Red Campion. No carpet of Bluebells or embellishments of yellow Primroses deep into spring. No creamy mopheads of Elderflowers in May and June and no Elderberries come autumn. No Flowering Wood Rush, or Opposite-leaved Golden Saxifrage, and no Dog roses, for the beautiful arches on the bend which have been there as long as we have lived here, are now ripped out. Progress is it? 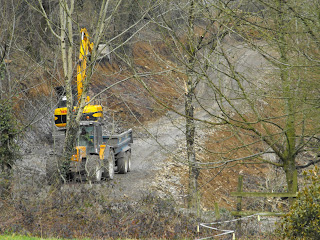