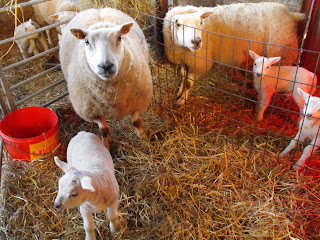 I have been looking through a few of my old Countryman magazines (I seem to collected have 50 or so over the years and they will be coming with us when we move) looking for a particular piece about rat armies. I haven't found it yet, but have been wonderfully side-tracked by articles and snippets, including this one, from the Spring 1962 edition:

During last lambing season mysterious casualties were occurring: several lambs were picked up dead, generally with mangled heads, one of which was bitten right off. Yet it did not look like the work of a fox; the bodies were quite untouched. Dark threats were muttered against a neighbouring Alsation; and the next night, as the moon was nearly full, the farmer decided to sit up with his gun, taking turn about on guard with his shepherd. A cold February dawn was breaking, and he was thinking of throwing in his hand, when he saw his daughter's cob approach a lamb that had wandered away from the ewe. The horse laid back his ears, raised a shod forefoot and crashed it down on the skull of the lamb, which collapsed without a bleat. Then he savagely shook the corpse and bit into the back of the neck, before dropping it and walking off slowly with an air of unconcern. The culprit was hastily moved to another field, and no more lambs met that sort of sudden death. The cob is a good-tempered animal and had always been quite friendly with the ewes, although he had not previously been with them at lambing time. We wondered if this lamb-slaughter complex could be a form of jealousy. F.E. Welchman, Wilts.

I don't know what was going on in that horse's head, but our little rotund Itsy had a habit of chasing the cats if she caught them in the middle of the field, and unfortunately probably caused the demise of one of our elderly cats, Sooty, when she caught her with a hoof. I think it's to do with territory, as my Arab Fahly would chase off people he was unfamiliar with (my son on one occasion).
Posted by Bovey Belle at 23:18