Some detail on those Ag. Lab ancestors

My lovely old butter churn. I bet some of my female Ag. Lab. ancestors were very familiar with this - and its bigger cousin the barrel! 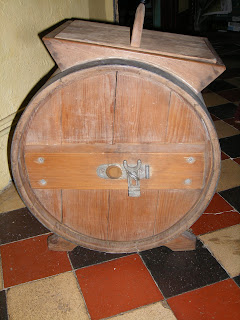 Very few people seem to visit blogs at weekends (well, my blog at all events, or comment), so this is probably going to be Lost At Sea, but what the heck, I'll share it anyway. I've been going through my collection of old Countryman magazines this week, looking for a particular article, which I've not come across yet. However, I did find a very interesting article about Husbandry Apprenticeships in Devon, where apparently they were common.

Children would be apprenticed around the age of nine years, and bonded until 21 years (or in the case of the girls, until they were married). Indentures were signed by the churchwardens and overseers in that parish, and the law allowed the overseers to "apprentice any child whose parents, in their opinion, were unable to maintain it. Neither parents nor children were consulted."

Naturally, whilst there were good placements for children, and where they would certainly fare better for good food than had they stayed at home, this system was also wide open to abuse. With no inspections or general rules beyond providing the apprentice with "sufficient meat, drink, and apparel, lodging, washing and all other things necessary and fit for an apprentice" (and those open to the interpretation and mean-ness of the Farmer concerned). Any farm with an annual value of £10 or more were forced to take the parish poor as apprentices. In 1808, a report made to the Board of Agriculture thought the system good and recommended it being adopted in other counties (although generally speaking there was just an overspill into Devon's borders with Somerset and Dorset), but he noted that " 'some further regulations should be made to soften the severity of their servitude' for girl apprentices. What, he asked, could a girl of ten or twelve be expected to perform with a mattock or shovel."

By the Report on the Employment of Women and Children in Agriculture (1843) there is evidence given from the apprentices themselves:
Charles Medway of Doddiscombesleigh, labourer: 'I was born at Bridford. My father and mother were farmers' labourers. . . . I was first put out at 6 years old to a place to fetch cows, water, etc. I was afterwards, between seven and eight, apprenticed. . . It was a very good place, as good a place as a person could wish to be in: plenty of meat and drink. As for work, why people must work, and there was plenty of that. The boys lodged with master's sons, in the same room; the girls slept in another room with master's daughters. There were 21 of us in the family all at one time. I was clothed pretty well: I had two suits, one for Sunday and one or week days. I always went decent to any place on a holiday. There was never any serious disagreement between master and mistress and the apprentices: a few words, perhaps, but none of them ever went before a magistrate. I was living much better in the farm house than I might be at home . . . I learned to read in the farm house. Master took care we should read on winter nights, on Sundays particularly. All the apprentices were brought to the reading in the same way. I went to church twice on Sunday generally. I said my catechism every Sunday to the master; he made his sons and daughters attend to us. I was confirmed: master was always anxious about that with his apprentices . . . I think apprenticeship a good thing: a labourer gets rid of children and the children are better off, in a god place. I was in a good place, but I was lucky. I know many places where I should not like a child to be sent to: the children in such places have no clothes to wear; they are beat and half-starved. There are many such places; but, generally speaking, places are good."

This next extract if from Mary Rendalls of Exeter, whose husband Patric was a labourer: "I was born at Shorbook; my father was a mason . . . I was apprenticed between eight and nine to Mr Thomas Nicholls, farmer, of Lower Woodrow. . . . I stopped with him till I was 16 . . . Generally we had good food, better than many apprentices had, as I have heard them tell; oother times not so good. . . I always lived better than if I had been at home. I always had a bellyful. When I was an apprentice, I got up as early as half-past two, three, four or five to get cows in, feed them, milk tthem, and look after the pigs. I then had breakfast and afterwards went into the fields. In the fields I used to drive the plough, pick stones, weed, pull turnips, when snow was lying about, sow corn, dig potatoes, hoe turnips, and reap. I did everything that boys did. Master made me do everything. I took a pride to it, when I used to reap, to keep up with the men. . . My mistress was a very bad temper; when bad-tempered she treated me very ill; she would throw me on the ground, hold me by the ears, kneel upon me, and use me very ill. i used to scream. This has happened several times a week. I have not been free from sore from one week to another. I still have marks upon me from kicks (she was 41 when she gave the evidence). At other times she treated me pretty well. When she was violent, we had not enough to eat. My master beat me, and I went home to my father's house. My father was afraid to let me stop, as he might be summoned, as I was an apprentice. My brother took me to Chedworth, about 16 miles off, to prevent my going to Bridewell** . . . There were many bad places in the same parish; people used to dread the time when children had to go out. Apprentices were often badly used at that time, not so bad now, things are more looked into." 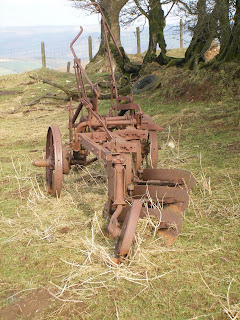 ** Bridewell - this was Bridewell Prison, one of two in Exeter.
Posted by Bovey Belle at 03:04