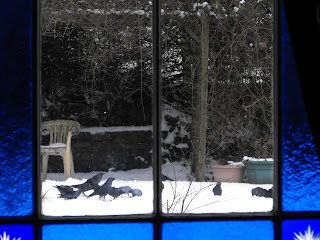 My Fieldfare has perked up no end after three days of good food. He arrived rather weak, but now he's holding his own against the Blackbirds (21 of them at the highest count this morning!) Similar numbers of Chaffinches too, but sadly the Blue and Great Tits are in lesser numbers. They would rather have the seed than the peanuts because it takes so much energy to peck at the peanuts, so I've been grinding some up and throwing that out, along with some dried fruit for them all. I have lots of feeding stations out there, most of them on the ground, so they can get to the food more easily and there is less competition for it than just having one area.

The Tits have finally discovered the big fat ball with millet in it. I shall do a birdseed one tomorrow and hang it in a seperate tree.

The water for them to drink and preen with soon freezes over so at the moment I am out there every couple of hours to top it up and offer more scraps and seed. The apples are now getting in short supply so I am cutting them in four which feeds 4 times as many birds.

There is a row of elderly ivy-covered ash trees along our boundary and I think they are providing roosts for many of these birds at night. Last winter I watched as many as 8 tiny Wrens take it in turn (there was a strict pecking order) to creep in behind the barge boards at dusk, to cwtch up together and keep warm. 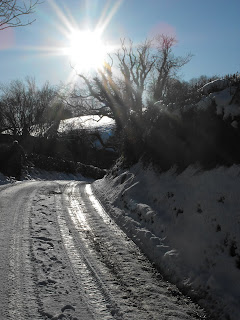