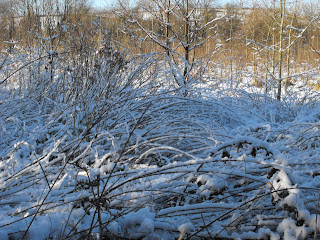 Peel and core the apples and cut into chunks. Combine apples, water, cinnamon and sugar in a saucepan, bring to boil, cover and simmer until apples are really soft (about 20 mins). Puree apples through a sieve or food mill (I just beat mine with a wooden spoon, but you can leave them to go in unpureed, to be honest). Seperate eggs and beat the yolks. Add the melted butter, currants, apple puree and lemon rind.

Whip the egg whites until stiff and fold in the sifted cornflour (sifting's important). Mix in the breadcrumbs and apple puree mixture as lightly as you can to incorporate them (use a figure of 8 movement with a wooden spoon).

Well butter an 8" cake tin and dredge it with flour. spoon in the mixture and cook for 40 mins (350 deg. F/Gas 4). Leave to cool in tin, turn out and dredge with caster sugar.

This is yummy and turns out like an apply bread pudding.

A trip down memory lane here, as this recipe is one I wrote out on a card about 30 years ago, so don't know where it came from. Well worth making, and sorry, no photo, as we've eaten most of it already!

Now, the roads. Well, the car is still in the driveway. Honey is unable to go to the vet's so I am praying she will just heal nicely. My husband and son have set off with rucksacks to the animal feed place at Wern, about a 6 1/2 mile round trip. Tomorrow we will have to try and beg a lift into town from one of our neighbours nearer the A40, who has a 4x4 and no icy hill in the way. We are getting low on several essentials now and there is more snow forecast, so I want to get plenty of flour in for bread-making etc., and we'll all be reduced to drinking water soon (no bad thing probably!)

The neighbouring farmers are getting very worried as they have no way of clearing a lane in for the milk tanker to get through, which means they will be throwing milk on the fields after today (I would beg some for cheese making, but I have no rennet). The Highways department is no longer answering the phone, and the last message to a neighbour on Christmas Eve about filling up the grit was that there was a big demand as people had been using it on their driveways! Well, not around here they haven't, and our lanes are lethal/impassible. Even the 4x4s are going into freefall on the icy hills. Desperate farmers have been turning up at the Council gritting depot with tractors and trailers and begging for grit so that they could treat their own lanes but they have been turned away. I hope that there is a big stink over this in the papers, as we pay huge amounts of Council Tax and then get the bare minimum in return. Our rubbish hasn't been collected for 3 weeks now - because the roads have been so bad . . . I think it may be worth buying the Carmarthen Journal next week as there will be a spate of letters . . .

I have turned off the Hergom in the kitchen as even with it on it's only just scraping 54 degrees F, which is cold by any name, and we have had Jack Frost on the insides of the windows all week. When I have the oven on for baking my bread and an apricot crumble, it may warm up a bit. Time to move to the sitting room and light the woodburner I think, and thank heavens we have a whole large apple-tree's worth of wood to burn on it, even though it could do with seasoning a bit longer . . .
Posted by Bovey Belle at 04:17