Something has to change 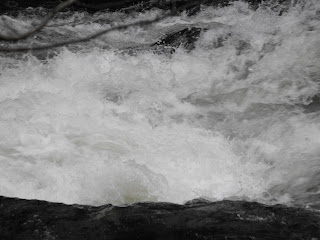 Looking over my shoulder out of the window, all I can see is a monotone landscape. Shades of grey, greeny-grey and browny-grey. My late m-in-law (always a cheerful soul, NOT!) would have called this "suicide weather". I am inclined to agree with her this morning, having slept very badly last night thanks to Lucy-cat sitting on my shoulder all night, purring loudly and dabbing me with her paws. At 5.45 a.m. I gave up the battle to sleep and now feel thoroughly drained. I have done the last of the ironing to warm up, then decanted some bulk-bought spices into re-used (again and again) glass spice jars. The last one I did was chilli flakes. I picked up a few straggler-flakes. Then I blew my nose. Bad idea. Now it has chilli-flake-itis and is streaming . . . Just shows how awake I am this morning.

Last night I was reading Henry Beston's "Northern Farm". If you have never read any of his work, may I recommend anything he ever wrote. His relaxing prose and short chapters were just what I needed last night, although one paragraph has set my mind working on a particular spiral today. In the preamble to this paragraph, he was speaking of "the need of men for a community to live in and live with." That this was as yet an unrecognised need - certainly a concept totally alien to politicians at national level, and yet surely it is a fundamental basic of nationhood - that people interact and work together for the benefit of themselves and their community. He goes on to say:

"I suspect that if this open wound is to heal, it will have to heal like all wounds from the bottom, and that we shall have to begin at the beginning with the family and its obligations, with the village and its responsibilities, and with our universal and neglected duty to the earth."

Wise words, and very pertinent now, although I believe Beston's slant was more towards "our universal and neglected duty to the earth."

With the recent court-case about the feral boys who tortured, sexually abused and damn near killed two other boys who they saw as victims, this comment seems particularly relevant. The structure of family, for some stratas of society, seems to be in meltdown. "Dysfunctional" as an adjective attached to the word "family" is common coinage in newspapers. There have no doubt always been families through civilization whose attitude to child-rearing has been at best slipshod (think of that famous Hogarth print, with the gin-sodden mother not noticing as her baby falls over the railing), that children were perhaps just a commodity by which you might earn money - it was common in Victorian times for children to be sold into prostitution - or at best, those from working families had to earn their keep and support their parents as soon as they could do something - anything - useful. Think of Charles Dickens in the Blacking Factory children up chimneys, working down mines and amidst the mill machinery, bird-scaring or being (literally) "farmed-out" at 8 years old.

Now children are being sold downstream by parents who renege on their social obligations - have nothing to pass on to their children from their experience of the world, and at worst, like the boys above, were only taught the degradation of mankind via family violence, alcohol and drug-abuse, and violent and/or pornographic films so that is normal in their world. In the milder instances, some parents see no obligation to teach their child to be continent before going to school (the teachers can do that), and they see it as the school's job to teach the children moral boundaries, ethics, social skills - even speech in extreme cases. It reminds me of one family I came across where the mother had one supper for herself and her "partner" of decent food - even lobster or steak - and then a jam sandwich and crisps type "meal" for her - 7 - children. The youngest child spent its time strapped into a pushchair in front of the television all day long.

It worries me to read that so many young people have no life skills whatsoever but live in a house with every possible convenience money can buy, but having come from a family in which both parents worked, so the skill of cooking from scratch became one of shoving something instant in the oven or microwave, in one or two generations, a basic building block of family life, food - nourishment - has become degraded and undermined. Boys grown to men have no idea how to change a plug, carry out a simple woodwork repair, grow anything in the garden. Children grow up thinking that being a celebrity is a "career" choice . . .

My family mean more to me than anything and I have always seen it as my moral responsibility to equip them to grow into capable and well-rounded adults, with skills that they can pass on to their children in time. My responsibility to teach them the difference between good and bad, to show them boundaries, for them to show consideration to others, to recognize their obligations and responsibilities to their partners, family, friends, workmates and neighbours. When they were growing up it was blardy hard work. Children need those boundaries in place - they seek them because that boundary gives them security.

It is apparent that without any boundaries they are their own judge and jury, run wild and listen to, like the boys in Lord of the Flies, the beast inside us all . . .

Perhaps it is time for the words duty, obligation and responsibility to be highlighted again in family life, from the parents downwards and to heal that festering open wound from the core.
Posted by Bovey Belle at 00:38