I have spent a good time this morning both bird watching, and feeding them. Poor little chaps are desperate in this weather. Maximum sightings at any one time: 12 Blackbirds; one Fieldfare; 3 Redwings; countless Sparrows, Chaffinches, Blue and Great Tits; Nuthatch; Greater Spotted Woodpecker; about 15 Jackdaws and as many Starlings, a Robin, a Pied Wagtail. I have tried to spread their food about as much as possible, as the Blackbirds are wasting precious energy fighting over the apples. I had some rubbery carrots, so I chopped them up small with two chopped potatoes, and boiled them up for the birds, and some Lasagne sheets (well out of date) broken into little pieces too. They have had fresh water in the drinking/washing bowl under the patio table. This and the two manky old chairs were going to be recycled in the autumn, but we never got around to it, are now proving useful as feeding stations, and the only snow-free area is under the table, which is where I have put a big pan of water. 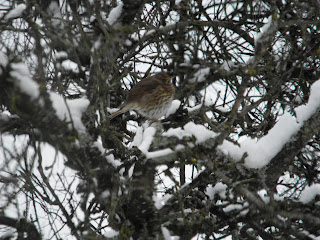 One of the Redwings looking puffed up against the cold. 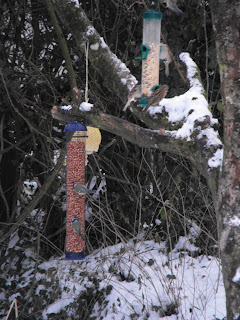 Blue tits and a Sparrow on the nut nets and seed feeder. There are normally 10 or a dozen birds on or around each feeder. Lots of Chaffinches underneath and a Pied Wagtail too. Plus a Robin near the house. 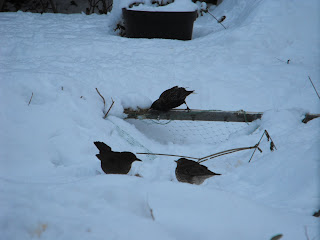 Hen Blackbird versus Redwing versus Starling! That's the fish pond they're on . . . 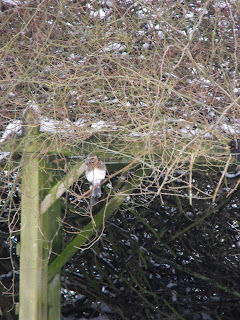 One Fieldfare has been here all morning, glad of scabby old apples to peck at. 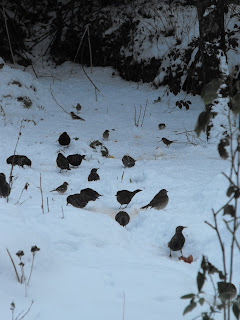 An assortment of birds pecking at the seed and apples I put out for them. 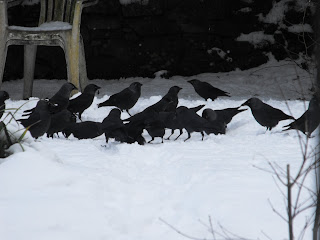 A "clattering" of Jackdaws! When they arrived, all the other birds scarpered . . . They are fascinating to watch, as there is a very definite pecking order, with the lower birds prostrating themselves to the higher ranking ones, heads down, wings spread. I have seen them punishing and attacking bird (summer months usually) for some misdemeanor, harrying it through the woodland with an incredible angry screeching. Whether it is a bird from a different territory or it has transgressed mightily, I don't know. 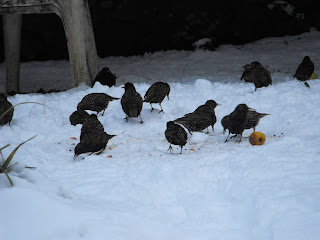 And then the starlings arrived. We NEVER have them in the garden - obviously the feeding frenzy brought them in. We had a big roost of them last winter, but just staying a few nights in the ash and oak trees down the hill. Then they flew south.
Posted by Bovey Belle at 05:09