Not much fun driving along this icy stretch, now that it is under fresh - concealing - snow! 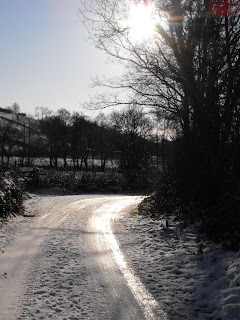 Yup - MORE snow. About another 4" or 5" this morning and more to come. I am extremely relieved to say that we managed to get down the hill after some angel gritted it yesterday (we told "Next Door" the whereabouts of a full grit bin as he was desperate for some to grit the top hill so the milk tanker could get in. Perhaps this was his way of saying thankyou.) Anyway, I have NEVER been more glad to see the bright lights of the "Open 24 hours, everything under one roof" Tesco! Half the shelves were bare, so I guess the world and his wife had got there before us, but hey-ho, we did a double shop and should be OK until the thaw - there IS going to be a thaw soon isn't there? Next week perhaps? We have to get darling daughter back to Uni . . . or at least to her friend in Newport, for onward transmission . . .

My menfolk walked the 3 miles or so to the pet fod store at Wern yesterday afternoon and came home laden with a 10 kg bag of cat biccies and 2 dozen tins. The chap at the store took pity on them and gave them a lift back to within half a mile, bless him. He's got our business in future, that's for certain. We already buy the biscuits and bird food from him.

We have topped up the bird feeders twice today, as they are desperate. I've just melted down some fat and put an out-of-date bag of millet in it, so when that's set sufficiently I'll hang that out. I used a net that had lemons in yesterday - nothing wasted.

Honey's eye is still not right, but I have been given a tip from a LOVELY on-line friend (Thanks CW), so I shall try that out later. At the moment, it seems a little better and she has been out in the snow and then in demanding FOOD.

Below - a little band of wild birds, mostly Chaffinches, yesterday, after the seed I had put loose on the patio. 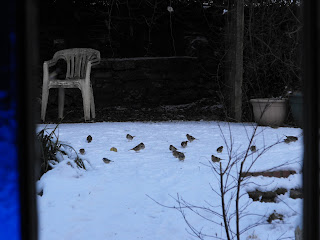 This is my pet pheasant! He is picking over a lamb bone we put out for any interested parties last night, but I think the foxes were staying underground, as no foxy pawmarks near it, and it hasn't been taken. 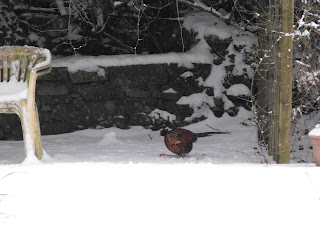 The depth of this morning's snowfall can be seen on the wall and the pond is just about covered in now! 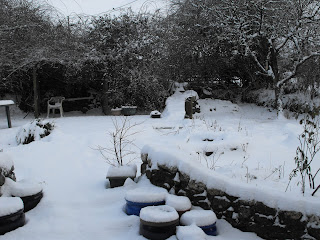