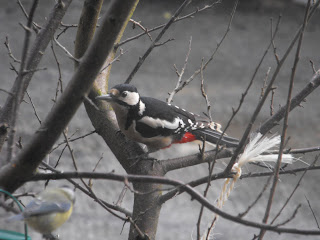 As a follow-up to my earlier post, I would just like to add that I have had the most pleasing, satisfying and happy afternoon for a while. Part of it was due to having the snow gone, so I actually CAN get on outside if I want to, as much needs to be done in the garden. Hmm, and indoors too of course. Tomorrow I will get a good walk in, but today I bartered making the White Chocolate Chip Cookies D wanted for him getting me a wheelbarrow full of muck heap so I can start putting bulbs in the long herbaceous border. These are bulbs I bought in December, all reduced to 49p packet, but then we had the cold and snowy spell and they have been bugging me every time I walked down the hall (as they are in a box on top of seed potatoes and the flower/veg seeds left over from last year.) I wouldn't let myself out in the garden until I'd finished the baking AND the washing up, but I now have one barrowload of well-rotted muckheap on the first few feet of the border. I'll continue tomorrow and hope to plant all the bulbs then. 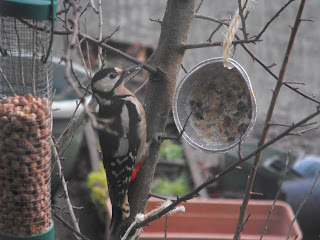 Anyway, whilst I was washing up, "Woody", one of the pair of Greater Spotted Woodpeckers who visit our nut nets, came along and this time discovered that the home-made fat/seed containers are pretty tasty too. I was able to get some really good shots of him through the window (if you can see any muddy paw-prints on the glass, blame Fluff!) Normally I only get the bits of him which aren't covered by the nut net, or else his back! These are for my friend Tricia back in Hampshire - as I promised her some a week or so ago. 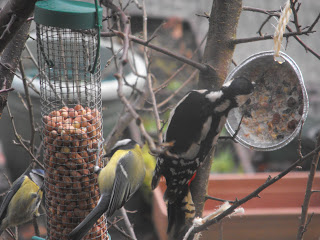 The White Chocolate Chip cookies are REALLY good and I also made a batch of Plum Muffins to use up a tray of plums which were reduced the other day. (Recipes to follow).

So, I've not spent any money. I've not done anything exciting. I've not moved further than 10 feet from the front door, BUT I have had the most satisfying and pleasant afternoon. Being able to put a tick against my mental list of "things which HAVE to be done" is really so rewarding - there is nothing worse than having jobs hanging over you and not being able to get on and do them. 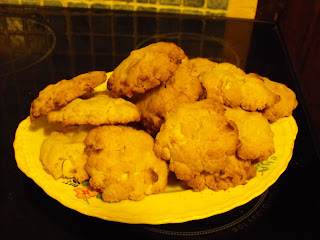 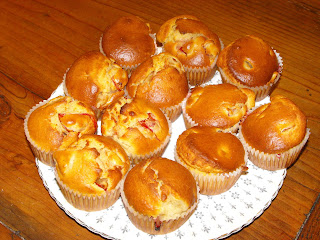 Then there was an added bonus of listening to a programme about Jazz musician Humphrey Littleton on Radio 4, which quite took me back to our days at The Concorde Club in Southampton. Happy carefree days they were . . .
Posted by Bovey Belle at 08:16