No apologies for repeating this extract from my original CodlinsandCream blog. If I knew how to import EVERYTHING across, I would. (Suggestions on a postcard please!) Please go across and wander through my archives, as there's all sorts of obscure stuff in there!

I was tidying up this week and in my craft cupboard I came across a little pack of Dorset Buttons to make up, so I will sit down with them tonight and put some pictures up when I've made some. This was a post from the end of March last year, and it was one of the posts which seemed to attract a lot of visitors, so hopefully it will again. I love the photo beneath and will try and make some colourful buttons like these. 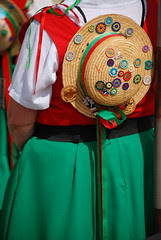 When we used to live in Dorset, there was a little shop in a neighbouring village which sold collectables and nick-nacks and if my memory serves me well, it was called the Dorset Button Shop. This was in Lytchett Minster, where the bountiful Lady Lees attempted to revive "buttony" but it collapsed with the advent of the First World War. I believe it had once been the cottage where these later Dorset Buttons were sold. At one time, many cottage dwellers across Dorset made Dorset Buttons when the trade was flourishing. I have made them myself using small brass rings - a friend sent me a little kit one Christmas. Using embroidery floss, you use a basic buttonhole stitch around the ring, and then make "spokes" across the centre of the ring which you also embellish with an alternative colour. I think it was the Blandford Cartwheel design I made.

Button making was truly a cottage industry, and it flourished throughout the county in the 17th and 18th centuries. Originally sheep's horn (Dorset Down of course!) was used at the basis for the button, and was covered with cloth which was then embroidered and was a conical shape upon completion. These were known as "High Tops" in the industry. The diameter of the buttons varied greatly - from 1/2" down to an amazingly small eighth of an inch. With the poor lighting in most cottages, especially in the evenings and winter months, this must have been very bad for eyesight. Metal rings were then introduced, being cheaper than the horn base for the buttons. The industry was originally centred on Shaftesbury, in the north of the county, but then moved south to Blandford. An enterprising shop-owner (a Mr Fisher) opened a Button Depot at his draper's shop in the Market Place and workers sent (or took if they lived close enough to walk) their wares to this shop to be sold on.

Cloth-covered buttons sold from as little as 8d a dozen, up to three shillings. The women making them could earn up to two shillings a day for making 6 or 7 dozen buttons, and this was wealth indeed when the average farm worker's wage was 9d a day. This industry enabled widows to support themselves once the main breadwinner had died, and married women were able to stay in the home to care for young children whilst still earning a very good wage.

The best quality buttons (for export) were mounted on pink paper; 2nds on navy blue paper and 3rd class buttons on yellow paper.

This cottage industry ended after the Great Exhibition of 1851, when Mr John Ashton displayed a button making machine. It spelt the end of the Dorset Button Making industry almost overnight, as buttons could be made at a fraction of the cost. Starvation stared families in the face. The elderly and widowed ended up in the workhouse. Those who were able, fled to the colonies. 350 families from the Shaftesbury area alone emigrated, at the expense of the Government.

Many thanks for these two links for the history of the Dorset Button:

And here's a "How To" page with photographs.

Here's a link for booklets and kits :