View from Dinefwr Castle, seat of the Princes of Deheubarth in ancient times. 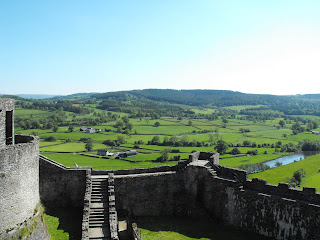 . . .was last night. And I missed it. in fact, it would have gone clear over my head but today a penny book arrived that I'd bought from Amazon (well, strictly speaking a £2.76 book, inc. postage) but you know what I mean. I saw it in Leanne's bookshelf over at Dorset Days (Somerset Seasons). It is "Maypoles, Martyrs & Mayhem" - 365 days of British customs, myths and eccentricities, by Quentin Cooper and Paul Sullivan. Just my sort of book (and Leanne's too).

St Agnes Eve is strongly connected with the area I live in, for the Cwn Annwn, the spectral Welsh hounds (like the Devon Wisht Hounds I assume, though the Wisht hounds hunt for the soul of unbaptized children and the Cwn Annwn hunt the souls of the damned). Although Carmarthenshire is now back to being Carmarthenshire again, it was for a few years recently, made part of the bigger area of Dyfed, which included Pembrokeshire and Ceredigion. In ancient times, Dyfed was a principality. Among its Princes was Pwyll, who is remembered in The Mabinogion. Apparently he was out hunting with HIS hounds when he met with the spectral hounds of the Cwn Annwn, hounds the colour that Irish Setters used to be once upon a time (if my memory serves me well) - the spectral, the warlike colour of white with red ears. When they brought down a stag, Pwyll set his own hounds on the fallen deer, and they routed the Cwn Annwn.

This resulted in Arawn, King of Annwn exacting a punishment upon Pwyll - the equivalent of forgoing the hunting of a hundred stags, unless he should agree to swop lives with him for a year and a day and commit to kill Arawn's greatest enemy. This came to pass, although it was only on the final, 366th day, that the enemy appeared, and no great contest this, for Pwyll killed him with a single blow. Pwyll also had the self control not to sleep with Arawn's good wife in the Biblical sense, only sharing her bed. Eternally grateful, Arawn made a pact between the two kingdoms and ever after Pwyll was known as the Head of Annwn.

It was also St Vigean's Day up in Scotland. St Vigean was a 7th century Irish abbot. According to legend, the church at St Vigean was supposedly built above a subterranean lake and when attending Communion there, the congregation risked the church collapsing into this lake. This was believed so wholeheartedly that between 1699 and 1736 no service was held! However, one minister, braver than the rest, decided it was all hogwash and held a service - presumably on his own whilst the parishioners watched from a safe distance. After the church didn't collapse, normal service was resumed. . . .

St. Agnes' Eve - Ah, bitter chill it was!
The owl, for all his feathers, was a-cold;
The hare limp'd trembling through the frozen grass,
And silent was the flock in woolly fold:
Numb were the Beadsman's fingers, while he told
His rosary, and while his frosted breath,
Like pious incense from a censer old,
Seem'd taking flight for heaven, without a death,
Past the sweet Virgin's picture, while his prayer he saith.

The rest of this poem is HERE if you would like to go and read it.