I am so sick of winter, now we have had a thaw and just have green as the dominant colour outside, I thought I would remind everyone what high summer looks like. Here is a self-established clump of Purple Loosestrife - in the centre of my paved/gravel area which is only meant to have low mat- and clump-forming plants! 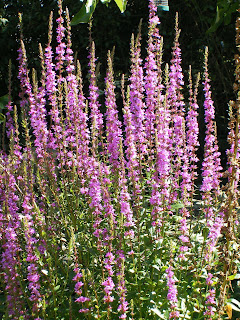 A good friend sent me a big parcel of books last year (well, two of you did, you know who you are!) but this particular parcel was British books, and I am slowly working my way through them so I can return them when next we meet. I am reading Rosie Boycott's "Our Farm" at the moment. It has given me plenty of food for thought.

She mentions people searching for happiness and sadly, measuring it by how much money they have, the foreign holidays they take, designer-label clothes which are worn once and then clutter up the wardrobe, hundreds of pairs of shoes (that's one thing I could NEVER understand, nor the matching handbags!), the two new his'n'her cars every year, their children going to a top school - and yet, stress levels in the workplace cost companies huge amounts from people going off sick due to stress-related illnesses, people have incomes of £150,000 a year and are still unhappy and in debt, rates of depression increase and in America, despite incomes having "risen 6-fold, the per-capita suicide rate is the same as it was in 1900". People are continually striving for more "things" to show how successful they are, and not realizing that true happiness comes from not wanting those "things" in the first place, but from finding pleasure and satisfaction in simple pursuits, from making things, from family, from helping people, from sharing and giving. . .

As I've said before, I have always taken pleasure in simple things and never had huge lifestyle expectations. We are fortunate in living in a big old Welsh farmhouse, and having our own land, but although we bought cheaply, we paid a big price in our time, our labour, and putting any money we inherited when our parents and aged relations died back into the house. In turn, the house was obliging in not falling down on our heads before we managed to get it reroofed (but it was a close-run thing!) We haven't had the foreign holidays, or the new cars every year. Holidays have been spent staying with friends and family, or else, camping in a very frugal style!

That isn't to say we don't have lots of "things" but we have the bargain variety. I can't say hand-on-heart that we haven't spent a lot of money on books (usually 2nd hand, but the majority of them stay with us forever) or bought furniture (from auction and often restored by us) or that we haven't gone a bit "mad" on occasion when it was something we wanted but perhaps shouldn't have bought, but I can honestly say it isn't the things we have bought, it's that special something we SHOULD have bought and didn't, which cause regret. We are in the position that our grown-up children have several pieces each of furniture, and prints, (and dunnamany books!) which they can set up home with in due course. These are favourite pieces which they have chosen initially. Several were made or restored by my husband.

There is something very competitive in the human psyche which makes people always want to be Top Dog. Some people have it a great deal more than others and when they are unable to compete with the Joneses, they become very unhappy. Perhaps with the new decade, more people will realize what really matters in life. Perhaps there will be a much bigger return to the land, ever more people moving on from growing their own vegetables, keeping a few chickens and having a productive allotment, a new band of 'Good Lifers' - I hope so.
Posted by Bovey Belle at 05:09